Biomass Energy with Carbon Capture and Storage (CCS) has been identified as an integral component in many of the low-carbon scenarios proposed to meet the Paris Agreement, a global commitment to limit the global temperature increase to 2oC, and preferably 1.5oC, higher than the pre-industrial level.

Oxy-fuel combustion is regarded as one of the main candidates for future commercial deployment of CCS with biomass power plants but making the switch to oxy-fuel combustion from the conventional air-fuel system presents a number of technical challenges. This is because biomass fuels vary widely in properties, composition and structure which all have the potential to produce drastically different fuel performance. 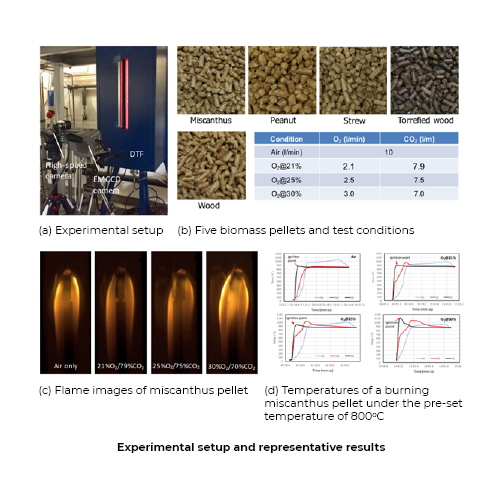 The results of the research have led to an improved understanding in fundamental aspects of biomass particles’ ignition and combustion, and thus energy conversion, and emission formation process under oxy-firing conditions. The research will also provide ample measurement data for the validation of computational models of biomass combustion which are being developed by other researchers. These computational models help researchers scale, predict, analyse and optimise processes which will, in the long term, promote the deployment of CCS and greatly benefit the environment by providing net-neutral, or even negative CO2 emissions.

Preliminary results from this project were presented at the 12th ECCRIA (the 12th European Conference on Fuel and Energy Research and its Applications) in Cardiff in September 2018 and a technical paper will be published to summarise the final results.

The UKCCSRC Scientific Council brings together Principal Investigators from ongoing and recently-finished academic UK CCS research projects, training hubs and facility operators. It is the prime route for the UKCCSRC to engage with, and coordinate the wider UK academic CCS research programme.

Carbon Capture and Storage is a technology that captures CO2 from an emissions source, such as a power plant, and stores it deep underground. By preventing the CO2 from entering the atmosphere, CCS can make emissions sources carbon neutral. By combining CCS with biomass there is potential for net-negative CO2 emissions. This is because biomass is made from plants which absorb CO2 from the atmosphere as they grow. When biomass is combusted in a power plant that CO2 is ordinarily released, but when a biomass power plant is combined with CCS the CO2 is instead captured and stored.