New research shows that captured carbon dioxide can be stored safely for thousands of years by injecting the liquefied gas deep underground into the microscopic pore spaces of common rocks.

The findings – published in Nature Communications today – increase confidence in the widespread roll-out of engineered carbon capture and storage. 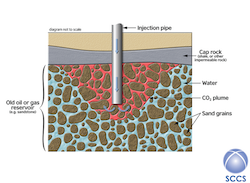 In the study, researchers from SCCS’s partner institutes, the Universities of Aberdeen and Edinburgh, compiled a worldwide database of information from natural carbon dioxide and methane accumulations and hydrocarbon industry experience – including engineered gas storage, decades of borehole injection, and laboratory experiments.

The UN Paris agreement has committed the world to limiting climate warming to well below 2°C from pre-industrial levels. This requires huge reductions in the amount of the greenhouse gas, carbon dioxide, which is released to the atmosphere from industry, electricity generation, heating and transport.

Capturing these emissions and ensuring that carbon dioxide can be safely trapped underground is crucial for the successful protection of the atmosphere.

Dr Juan Alcalde, who co-led the research at the University of Aberdeen said:

“The security of carbon dioxide storage is an understandable concern for people, communities and governments. Our work shows that the storage of carbon dioxide necessary to help address climate change can be secure for many thousands of years.”

Dr Stephanie Flude who co-led the work at the University of Edinburgh said:

“We selected the model inputs to be conservative but realistic. Importantly, our computer simulations, based on good-regulation practices, such as those used currently in the North Sea, retained more than 90% of the injected carbon dioxide after 10,000 years in 95% of the cases. The most probable outcome being at least 98% retention.”

The research was funded by the NERC Grant NE/M007251/1 on interpretational uncertainty.