Demonstration of Sustainable CCS in Japan 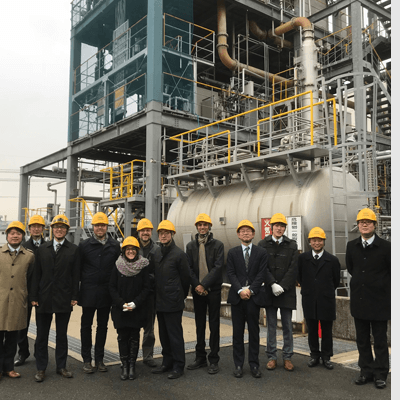 UKCCSRC Director Jon Gibbins together with Karl Anders Hoff, SINTEF, Purvil Khakharia, TNO, and Monica Garcia, IEAGHG, joined members of the Japanese Ministry for the Environment’s “Demonstration of Sustainable CCS” Project and other stakeholders for a workshop in Tokyo on 15 February. The workshop was to discuss methods to achieve a high environmental performance on amine post-combustion projects, including experiences from test units such as the UKCCSRC PACT facility and learnings from a published UK FEED study on procedures to eliminate environmental risks.

The Demonstration of Sustainable CCS Project is sponsored by The Ministry for the Environment to carry out a major five-year project to promote clean energy generation. The project is jointly led by Toshiba Corporation and Mizuho Information and Research Institute and involves a further 11 members.

The project will see the construction of a large-scale carbon capture facility to capture CO2 emitted by a thermal power plant, and evaluation of the technology’s performance, its cost and its environmental impacts. The project began in 2016 and is expected to run until 2020, when the results will be used to develop policies and measures to facilitate Carbon Capture and Storage deployment in Japan.

Toshiba will construct a carbon capture facility designed to capture more than 500 tons of CO2 a day, about 50% of its daily emissions, from the Mikawa Power Plant (capacity: 49,000 kW) operated by Toshiba subsidiary Sigma Power Ariake Co., Ltd., in Omuta, Fukuoka prefecture.

Mizuho and the other 11 members will investigate methods to assess the environmental impact of CCS, frameworks necessary for the smooth introduction of CCS in Japan, and overall CCS systems appropriate to Japan.

The Mikawa Power Plant is now retrofitted with a fluidized bed boiler to accommodate both coal- and biomass-fired power generation. When the CO2 capture demonstration facility is completed in 2020, it will become the world’s first power plant equipped with a large-scale carbon capture demonstration facility that is capable of capturing carbon dioxide from a biomass power plant.

The workshop was followed by a visit to the Mikawa Power Plant site, which already hosts Toshiba’s 10 tonne per day CO2 capture pilot plant.