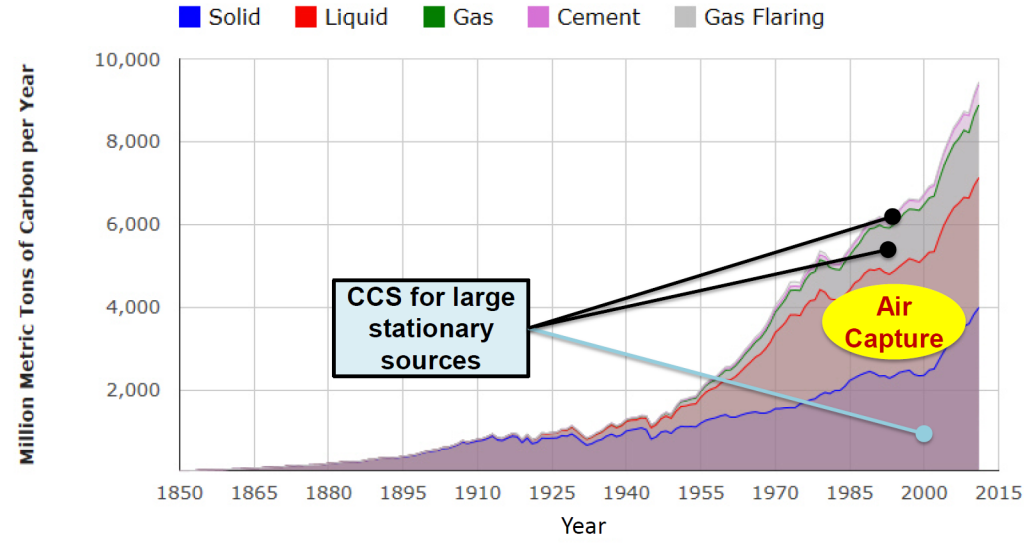 Dan Welsby, James Price, Steve Pye and Paul Ekins in their paper ‘Unextractable fossil fuels in a 1.5 °C world’ have done a very good job of telling the fossil fuel industry what will happen if they, like these authors, don’t take CCS seriously.

In the modelling for the paper it is stated that “CCS is [assumed to be] available from 2030, and can see capacity growth of a maximum of 5% per annum. Power generation technologies [and other CCS applications] have capture rates of 90%, which do not improve over time.” ‘High’ and ‘low’ CCS cases with 10% annual and 2.5% maximum annual growth rates were also considered.

It seems very hard to see exactly how much CCS of various types does get built under these assumptions but two things are clear from the quotes above:

Caring about these numbers is not nit-picking. When net-zero is at stake the metric for capture performance is not the fraction of fossil carbon captured but the fraction of fossil carbon released. Going from 90% capture to 95% capture of the CO2 in the flue gases from a gas-fired power plant obviously reduces residual carbon emissions by about 50%. Going to 99% capture would reduce fuel C emissions to zero – the remaining 1% CO2 came in with the combustion air. Science fiction? Probably not, just good value engineering when the alternative is direct air capture. See a Best Available Technology review for capture from power plants on the UKCCSRC web site for more information; current UK government guidelines are that new CCS power plants will be designed for 95% capture and the funding mechanism looks likely to encourage actual operation at significantly higher values than this.

On growth rates for ‘conventional’ CCS on fixed source, probably the first thing to reflect on is that the technology for producing the CO2 – and the power, heat, hydrogen etc. that our society uses to function – plus the supply chains, and also a lot of the actual plants, already exist. That’s why we have a climate problem. CCS needs to be added, retrofitted in many cases, but again existing industries already have the capability to do this. Think of car manufacturers being shifted over to building tanks in WW2; with the right drive things can happen very quickly. This is especially the case for China, a country that renewed or built most of its coal power plant fleet over the course of little more than decade.  But, still, how much CCS we have in place by 2030 will be a big factor in determining what can be done to ramp CCS up to multi-gigatonne scale for real global impact in the following decade, as discussed at the UKCCSRC international CCS conference at the beginning of this month.

Of course, while rapid roll-out of CCS on fixed sources could happen that is not to say that it will. Coal CCS failed to take off between 2005 and 2015, despite some very big plans. But what beat coal CCS, in North America and Europe, was a sloppy assumption that burning natural gas, without CCS, was OK for the climate. Coal with CCS, especially retrofits, might have had a chance of competing against natural gas with CCS at the time but, up against natural gas that didn’t need CCS to satisfy the ‘greens’ of that era, it was blown away economically. Fast forward to now and we are still seeing CCS, now proposed on natural gas and biomass, a mix that can deliver 24/7, net negative power, apparently losing on cost compared to intermittent renewables – but these are not 24/7 power suppliers and currently have to be linked with relatively high-emitting peaking power plants to give a reliable grid. It will be interesting to see if the hard reality of net zero only thirty years off drives a more level playing field in technology assessments and, if so, what wins out economically. Fuel prices are also a big factor in the outcome, of course, which comes back to production costs, an area where Welsby et al do go into a lot of detail.

But CCS on stationary sources, however much we have and whatever capture level it achieves, won’t address the problem of the third of global fossil CO2 emissions coming from oil. Most of this oil is used in transport and the only feasible way to capture its CO2 is to remove it from the air, using biomass with CCS or, because biomass is a finite resource, direct air capture. Direct air capture for carbon dioxide removal (CDR) can take place anywhere in the world where secure geological storage is available and can be driven by fossil fuels (obviously also with CCS) or by renewable energy. Despite a lack of government support until very recently, a range of technologies have already been developed and projects capturing up to a million tonnes of CO2 per year are being planned.

But again what could happen may not. CO2 removal and permanent storage could add somewhere between perhaps $75 and $250 per barrel of oil, but it is the only way to use liquid fuels (natural or synthetic) in a net zero GHG emission way.  You would think it was a no-brainer for national oil companies to be promoting direct air capture and deploying it as fast as possible to bring the cost down.  Oil-rich countries have all that it takes to do DACCS: secure geological storage, fossil and renewable energy to drive the capture process and, some of them at least, big cash reserves to develop and deploy the technology. Permanent CO2 removal via DACCS is even a valuable product that can be sold on its own, so as well as extending the life of their oil assets it provides a product, based on the same geology and skill base for post-oil exports. But if the corporate brains are actually thinking this way then they are mostly, with the notable exception of Vicki Hollub at Oxy, doing a good job of hiding it.

However, saving the future for oil companies is not what keeps me up at night pointing out that starting out with bad assumptions about CCS technologies will inevitably lead to the conclusion that we will be unable to use much fossil fuel. Rather it is that saving the future for our global society, which exists in its present form only because of the 80% of energy it stubbornly continues to get from fossil fuel, obviously needs the best that can be done with CCS on fixed sources and with DACCS. For this latter reason, let’s hope that the caricature of a CCS industry that Welby et al modelled, tragically wedded to 90% capture rates and swimming slowly forward in a treacly mix of underfunding and anti-fossil lobbying, soon becomes even less credible in the light of actual developments.