After five years of research activity, the UK Greenhouse Gas Removal Research Programme has now come to an end and published a series of policy briefs disseminating its findings and insights.

As highlighted in the UK Climate Change Committee’s recent report to parliament, further action is needed for the UK to meet its net zero ambitions, and greenhouse gas removal is seen by many as an important aspect of such action. The UK Greenhouse Gas Removal Research programme was launched in 2017, co-supported by three research councils and the UK Government. It brought together a wide range of partners and collaborators to address some of the main uncertainties surrounding the use of greenhouse gas removal to meet climate change targets.

The documents summarise the results from some of the individual projects and present future recommendations, as well as suggested areas of inquiry for the next generation of research projects and demonstrators.

The next stage of research into GGR has already started with the launch of the GGR Demonstrators (GGR-D) Programme in 2022, which is coordinated by the Greenhouse Gas Removal hub (CO2RE) 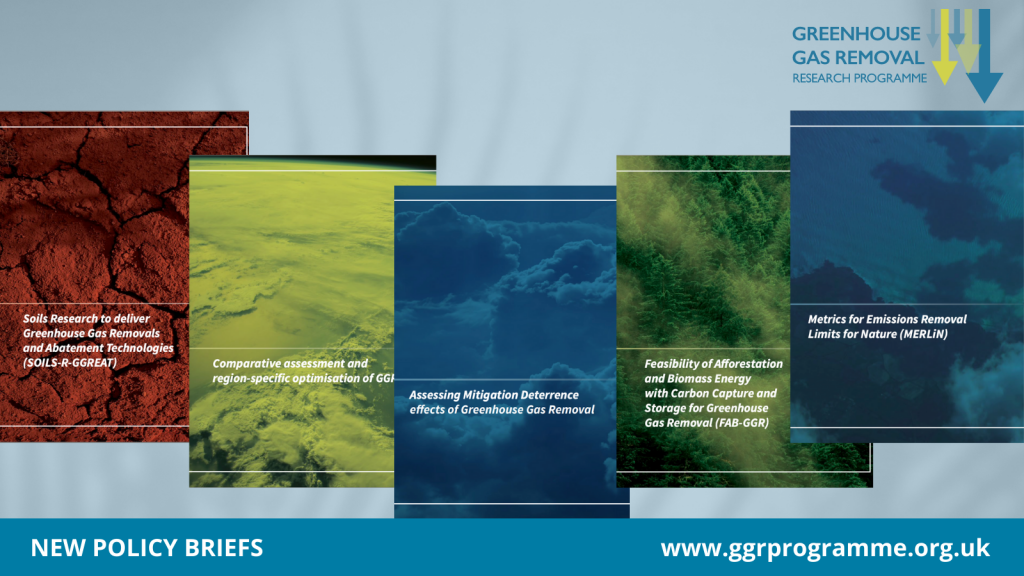 Yesterday, the Department for Business, Energy and Industrial Strategy (BEIS) released a number of announcements, reports and documents focusing on the CCUS Innovation competition and wider work by AECOM for BEIS reviewing ‘Next Generation Carbon Capture Technology’.

To achieve net zero carbon emissions by 2050, efforts must be made to decarbonise industrial processes including cement and steel production, currently seen as the dirtiest industries on the planet.  This article evaluates the potential impact of 9 approaches, including the adoption of the latest technology in plants; reducing demand by reviewing building codes; reinventing steel and cement production and using alternative fuels; the use of carbon capture and storage, storage of CO2 in concrete; recycling steel; and suggestions on how to overcome the economic hurdles of scaling up low carbon heavy industries.

You can read ‘Cement and steel – nine steps to net zero’ here.

The projects all met the eligibility criteria outlined in Phase-2 guidance.

We’re delighted to share news from one of our core research team, Dr Clair Gough and colleagues Muir Freer, Andrew Welfle and Amanda Lea-Langton on their new paper “Putting Bioenergy with Carbon Capture and Storage in a Spatial Context: What Should Go Where?”

The paper explores the implications of siting a bioenergy with carbon capture and storage (BECCS) facility for carbon emission performances for three case-study supply chains using the Carbon Navigation System (CNS) model. The supply chains they looked at were a wheat straw derived BECCS-power, a municipal solid waste derived BECCS-waste-to-energy and a sawmill residue derived BECCS-hydrogen.

A BECCS facility needs to be carefully sited, taking into consideration its local low carbon infrastructure, available biomass, and geography for successful deployment and achieving a favourable net-negative carbon balance. They found that on average, across the three supply chains a 10 km shift in the siting of the BECCS facility resulted in an 8.6–13.1% increase in spatially explicit supply chain emissions. BECCS facilities producing low purity CO2 at high yields had lower spatial emissions when located within the industrial clusters, while those producing high purity CO2 at low yields performed better outside the clusters.

The team also generated a map identifying which of the three modelled supply chains delivers the lowest spatially explicit supply chain emission options for any given area of the UK at a 1 MtCO2/yr capture scale.

You can read the paper here: Putting Bioenergy with Carbon Capture and Storage in a Spatial Context: What Should Go Where?

This paper demonstrates how a ‘Carbon takeback obligation’ mechanism, if enforced consistently, would enable hydrocarbon industries to meet Net Zero targets by 2050, as outlined in the Paris Agreement.

Unlike current proposals for carbon taxes or ETS certificates which effectively allow hydrocarbon industries to continue polluting; this new mechanism will place an obligation directly onto extractors and importers of fossil fuels to safely and permanently, dispose of a progressively rising fraction of the carbon dioxide (CO2) generated by their activities and the products that they sell.

This paper addresses the key global economic implications for governments, industry and consumers; and explores the associated risks.

You can read the paper here: Upstream decarbonization through a carbon takeback obligation: An affordable backstop climate policy.

Well done to all involved.

An international group of researchers, including UKCCSRC Director Prof Jon Gibbins, has carried out in-depth analyses of the climate impact of blue hydrogen. The study confirms that blue hydrogen, produced from natural gas and using carbon capture and storage processes, can play an essential positive role in the energy transition, when used with certain conditions.

The method used to produce the hydrogen determines its environmental performance. The optimal form is green hydrogen, produced by the electrolysis of water. For hydrogen to be green, the electricity used must come from renewable sources, such as hydro, wind or solar power, which makes it close to carbon neutral.  Hydrogen produced in this way is however expensive and not universally available – due to the lack of renewable electricity and electrolyser capacity.

Most hydrogen is currently grey hydrogen, produced from natural gas or other fossil fuels, which does not benefit the environment, as its production has a negative climate impact and energy is lost during conversion.

Blue hydrogen offers a compromise. Whilst it is also produced from natural gas using a process known as steam reforming, which heats and then splits the gas into hydrogen and carbon dioxide, the CO2 is not allowed to escape into the atmosphere; it is captured and stored permanently underground.

The research is an in depth study into the climate impact of blue hydrogen and was led by Heriot-Watt University and the Paul Scherrer Institute (PSI) in Villigen, Switzerland and carried out with an international collaboration of researchers from different institutes. The group used specific models for detailed simulation of processes such as carbon capture in order to model the production of blue hydrogen. The results were then fed into environmental performance models in order to be able to replicate the entire production chain, from natural gas extraction to carbon capture and storage.

The evaluation of climate impacts shows a nuanced picture: whether blue hydrogen actually benefits the climate depends to a large extent on how much methane is lost on the way from the point of extraction to hydrogen production, and how effectively carbon is captured during the steam reforming of the natural gas.

The key to generating blue hydrogen in the most climate-friendly way is therefore to ensure a high standard of technology. Lead author of the study Christian Bauer from PSI’s Laboratory for Energy Systems Analysis, explained: “Countries such as Norway are good role models. They are already able to extract and transport the natural gas with virtually no losses and emissions of less than 0.5 percent. If almost all the CO2 emissions are captured during the reforming process and stored underground in former natural gas fields in the North Sea, for example – a solution already proven to be safe and effective over many years – then this form of blue hydrogen is almost as climate friendly as the green form.”

Read a full press release from Heriott-Watt on this study here: https://www.hw.ac.uk/news/articles/2021/blue-hydrogen-can-help-protect-the-climate.htm

The Environmental Audit Committee is conducting an overarching inquiry looking at technological innovations which could contribute to tackling climate change. The next aspect of the inquiry will look at Negative Emissions Technologies (NETs). An oral evidence session will be held in late November 2021.

Read Jon’s evidence here, and see more about the inquiry and evidence from other witnesses here, with a news item containing its terms of reference here.

The US Infrastructure Bill includes a number of significant measures to support CCUS.

In line with the growing understanding, globally, of the critical role of ‘plumbing’ for CO2 disposal in underpinning CCUS clusters, the Carbon Dioxide Transportation Infrastructure Finance and Innovation (CIFIA) program supports the development of CO2 T&S infrastructure, based on the following principles:

Projects need to be of significant scale, more than $100M, and must provide common carrier services.  All modes of transport can be supported, so shipping, rail and road as well as pipelines.   A total of $2,100M is available to support setting up infrastructure with the necessary capacity for future expansion, $600M per year awarded in 2022 and 2023 and $300M per year in 2024, 2025 and 2026.

In addition, $2,500M are available over the period 2022-2026 for a ‘Large-scale carbon storage commercialization program’ to fund “the development of new or expanded commercial large-scale carbon sequestration projects and associated carbon dioxide transport infrastructure, including funding for the feasibility, site characterization, permitting, and construction stages of project development.”  Permitting costs for CO2 storage wells also receive funding, $25M at Federal level plus $50M at state level.

The IIAJA also includes support for hydrogen, with $8,000M for four hydrogen hubs, at least one of which must demonstrate ‘blue’ hydrogen production from fossil fuels with CCUS.

All of this is in addition to the 45Q tax credit program for tonnes of CO2 stored, which may be extended again in the near future.

These new developments definitely give substance to US Secretary of Energy Jennifer M. Granholm’s announcement, on Friday 5 November 2021, of a new US. Department of Energy (DOE) goal to reduce the cost of Gt-scale Direct Air CO2 Capture and Storage (DACCS) to less than $100/ton of net CO2-equivalent. As the DOE now notes this is “an all-hands-on-deck call for innovation in the expanding field of CDR—a key facet of the plan to achieve net-zero emissions by 2050.”

Our Director, Prof Jon Gibbins, recently gave a presentation at Humber Zero’s Waterline summit on 19 October 2021. Here we’re sharing his slides, Rapid development of CCUS: infrastructure and innovation, and a recording of the event over on the Sparq platform here.

By all accounts, it was a very useful and successful event – so well done to all involved! 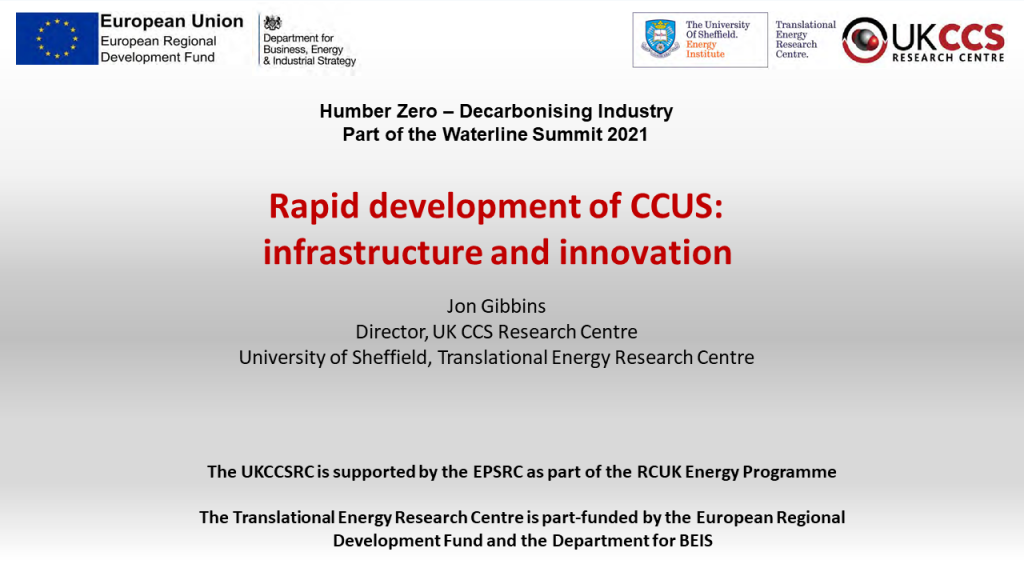