A blog containing contributions written by Kazeem Rabiu a PhD student at Loughborough University who received funding from the UKCCSRC’s ECR Meeting fund to attend the winter school 2017 co–organised by the ‘EPSRC Centre for Doctoral Training in CCS and Cleaner Fossil Energy’ & the ‘UK CCS Research Centre. 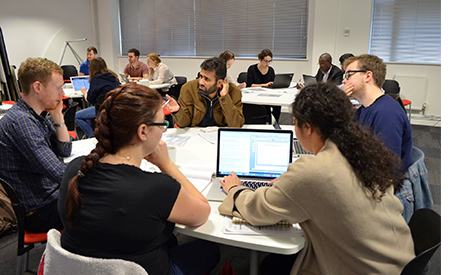 I attended the winter school which was co-organised by the ‘EPSRC centre for Doctoral training in CCS and Cleaner Fossil Energy’ and the UKCCS Research centre between 13 – 16th February, 2017. More than 35 researchers from various institutions throughout the UK were present.

After the lunch break on 13th February, 2017, the program kicked off by the welcoming introduction from the event chairman. Next, Dr Richard Millar from Oxford University presented on the Trillionth Tonne of carbon. Moreover, Mr Theo Mitchell from Carbon Capture and Storage Association gave lecture on current status of CCs in the UK.

At exactly 15:45pm, we went for break and poster session. All the posters presented by various researchers had unique features, and reading through all of them impacted my CCS knowledge positively.

After the poster session, Dr Robin Irons from Uniper gave talk on Convectional power generation in the UK and Europe and the Rotterdam CCS project. In addition, Mr Tony Alderson from UKSSC Research centre presented on decarbonisation heavy industry. After all the presentation for the day, all the researchers went for the dinner at the Petis Paris in the centre of Nottingham. During the dinner, I met some researchers and we tried to share knowledge among ourselves.