Where does CCS Figure in the Divestment Debate- and if Not, why Not? – September 2015 Strathclyde Biannual

Home » Blog posts » Where does CCS Figure in the Divestment Debate- and if Not, why Not? – September 2015 Strathclyde Biannual

Written by PhD student Miss JingJing Liu from University of Nottingham whose attendance at the Biannual was made possible by the ECR Meeting Fund.

Divestment has recently been in the news around the world. In the latest UKCCSRC Biannual Meeting hosted by the University of Strathclyde, a very interesting discussion of “Where does CCS Figure in the Divestment Debate?” was held on the second day. The panel was chaired by David Reiner from University of Cambridge and the panel consisted of; Stuart Haszeldine (Professor of Carbon Capture and Storage, University of Edinburgh), Richard Millar (Researcher, University of Oxford), Angela Whelan (Chief Executive Officer, Ecofin Research Fundation), Belinda Perriman (CCS consultant, Teesside Collective), and Chris Littlecott (Programme leader, Fossil Fuel Transition & CCS, E3G). Based on different backgrounds and affiliations, the speakers gave an extraordinary and inspiring discussion about the position of CCS in the divestment debate, especially in fossil fuel related companies. 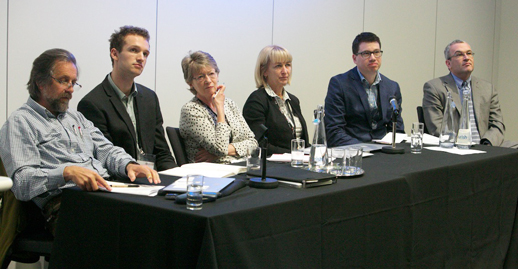 It is not strange for a university to be the cradle of radical views or revolution from the students or organisations within the university and therefore feel responsible for the society and public, especially when difficult changes need to be made. Stuart pointed out that in University of Edinburgh student activism placed divestment onto the University agenda. The University has confirmed plans are on track to divest from the activities of three of the world’s biggest fossil fuel producers. Richard Millar shared the same point of view by telling a similar case happened the the University Of Oxford. This will give the companies a hint that in the future, long term zero-carbon is preferred with respect to climate/energy investment. Both of them think the companies, at this stage, should value CCS as an alternative approach to a decarbonised future. 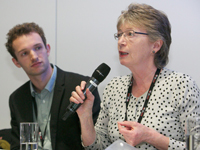 Angela Whelan leads the Ecofin Commercial Development Group and works with potential financiers, insurers, project developers and policy makers that are active in the UK CCS space. She thinks if CCS is to become investable and viewed as a viable route to decarbonising fossil fuel power generation, the voice of CCS needs to be louder to attract public attention. Also, the majority of public have little confidence in CCS. People who support CCS should not just sit back but increase the social impact and responsibility.

Belinda Perriman gave a very different, but touching “story”. She proposed that, public should not judge “fossil fuel industry” as the “bad guy” and sentence them to death. After all, there are millions of people who are currently working in this industry and there is a role for CCS to prevent the tragedy, but the transition needs to speed up. Chris Littlecott said that the challenge for CCS is that it’s difficult and expensive. The fossil fuel industry wants CCS to happen if CCS is affordable and efficient enough. This divestment is helpful to CCS, but some breakthrough technologies and exciting data is required.