Six intrepid UKCCSRC members set off for South Africa in September 2015 to start to unravel the mysteries of the Bongwana Gas Fault in KwaZulu-Natal. In fact ‘starting’ to unravel does a disservice to the early work reported on the site by SA survey geologists which proved to be incredibly accurate. The Bongwana Gas Fault stretches some 80km from the coast south-west of Durban north towards the town of Harding. Those early reports noted CO2 seeps along the fault, travertine formations and bubbling streams that led to the establishment of a commercial bottling plant in the 1920s near the village of Bongwana. A year ago at the invitation of the South African Centre for CCS (SACCCS), UKCCSRC members Jonathan Pearce and Gareth Johnson came for a short reccy that led to the field visit this year with a larger group consisting of researchers from the BGS, University of Edinburgh, University of Aberdeen and University of Strathclyde along with a large contingent of SA researchers from the Council for Geoscience (CGS), SACCCS, Council for Scientific and Industrial Research (CSIR) as well as local representatives from the municipalities.

Over the course of the 9 day visit the team visited 4 different sites associated with the fault, a nature reserve and the beach! The warm and sunny weather made a nice change from the recent UK summer and helped the team to have a very productive trip. The first site visited by the team was the farm of Eric Naiker, east of the village of Bongwana. A groundwater well which had been drilled on the farm in the 1970s encountered a CO2 charged aquifer and has been degassing CO2 since (despite being ‘plugged’ with a telegraph pole!). Kate Robey and Portia Munyangane from CGS, Mzikayise Nkwane from Groundwater Consulting Services and Stuart Gilfillan and Gareth Johnson from the University of Edinburgh collected gas and water samples from 2 wells on the farm to determine its origin and assess the effect it is having on the local groundwater. The BGS team of Bob Lister and Dave Jones sweated in the midday heat to measure soil gases and fluxes around the farm over 3 days, finding a considerable change in CO2 levels on the day the well was plugged. Given the rudimentary mitigation measures in place at present the team is keen to look at a future project there. 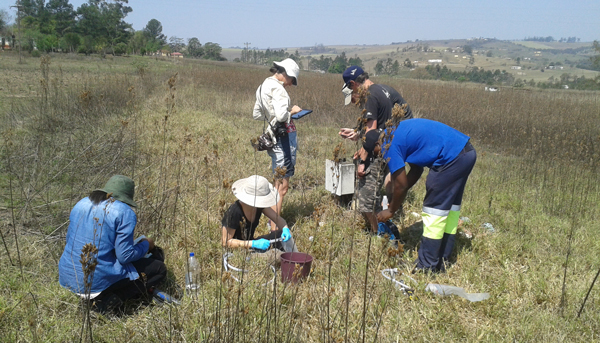 The visit to the Umtamvuna area allowed the team to get a feel for traditional African fieldwork, as the road ended at the top of the valley and equipment had to be lugged for a half hour hike down to the river in the valley below (300m descent). 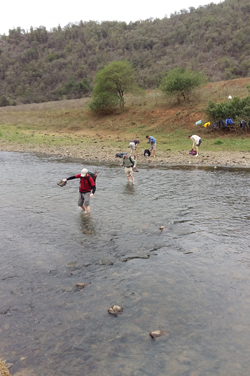 The endurance test didn’t finish there as then there was a river to wade across to find a recently unblocked (by the farmer having to dig out a stuck cow) bubbling spring and associated travertine mound. Once again gas and water samples were collected, along with a few lumps of travertine also being collected for future dating by Nigel Hicks of CGS and Clare Bond (University of Aberdeen). Back across the river two more travertine mounds were found (no surprise as all had been mapped by the original SA survey team), gas and water samples were obtained as the BGS team beavered away with their soil gas measurements, finding an increase in CO2 levels overlying the fault trace. The half hour hike down was a sweaty hours walk back up and the team were glad to get water from the cool box in the trucks.

Umtamvuna proved to be great training for the visit to Mjaja, as this time equipment had to be carried for almost an hour down to the valley floor. Thankfully, the journey was interrupted by an excellent exposure of the core of the Bongwana fault allowing the structural geologists of the team, Clare Bond and Yannick Kremer to spend a happy hour or two measuring fractures, mapping and sampling. The rest of the team found the bubbling spring, again marked on the early SA survey maps, and got to work sampling gases and waters. The soil gas A-team were thwarted by the lack of measureable elevated CO2 levels here, but fluxes of the spring were measured. The stamina and dedication of the team was then tested by the slog back up to the top of the valley, led by a couple of local kids who made light work of the climb, an extended breather was needed at the top.

Marble Delta was our last work spot, the scene of a large open cast mine for dolomite and calcite (in marble form), some were out of their depth at Granulite facies, but others dredged back earlier metamorphic lives! Sheared amphibolite and granite with super exsolution textures in feldspar twins wrapped calcite and dolomite, it self poly-folded. A Scottish mine engineer showed us around including the un-passable newly blasted road section. This was a challenge too far, but samples of calcite and dolomite, with perfect calcite twins, were taken. From the quarry we ‘lost’ our first team member David (Jones) to fly home and the rest of us took our chances with sharks in the Indian Ocean. 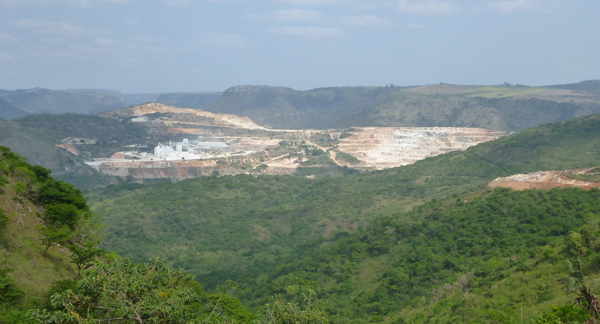 What do you do if you cannot look at rocks? You do the next best thing and go to the beach, after all the beach is made of tiny fragments of rock. The beach offered all you would expect; small rocks, young people practicing their civil engineering skills with improvised flood defenses and lots of sun to help the Scottish part of the delegation regenerate their vitamin D levels. The shark daring swimmers Stu Gilfillan and Clare Bond, with Kate Robey (CGS) joined the surfers in the Indian Ocean for a pummeling by crashing waves. 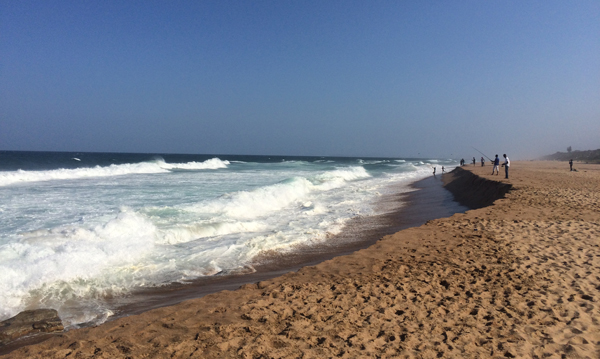 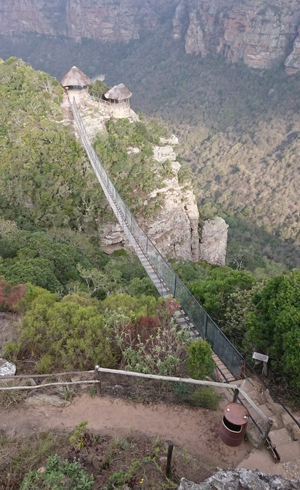 On the solitary afternoon off the team took a trip to Lake Eland, a quaint little nature reserve, preceded by a drive down the hugely impressive Oribi Gorge, which, as geologists, was a highlight which will live long in the memory. Plenty of photo opportunities presented themselves for spectacular panoramas and impressive cliff sections of the 700m thick Msikaba Sandstone. The reserve itself provided challenging 4×4 driving accompanied by Impalas, Zebra, Blesbok, Wildebeest, Eland, Kudu, Warthog, Vervet Monkey, Fish Eagle, Crowned Crane and many others we collectively failed to spot. Bravado came to the fore as the more intrepid amongst our group crossed the dramatic suspension bridge and walked out to the extended vantage point high above the Oribi Gorge itself. A very good day in the field.

We extend our thanks to UKCCSRC for the funding to get the UK team out into the field, to the CGS guys and Nigel Hicks in particular for the invaluable local knowledge and expertise and to the SACCCS team led by Thulani Maupa for hosting us and organising the on-ground logistics. Last but not least we extend our thanks to the local communities, municipalities, chiefs and councils in KwaZulu-Natal and the Eastern Cape who made us very welcome.