This blog was written by Oscar Farias Moguel who is a PhD student at the University of Sheffield and received funding to attend the Manchester Biannual Meeting from the UKCCSRC ECR Meeting Fund. 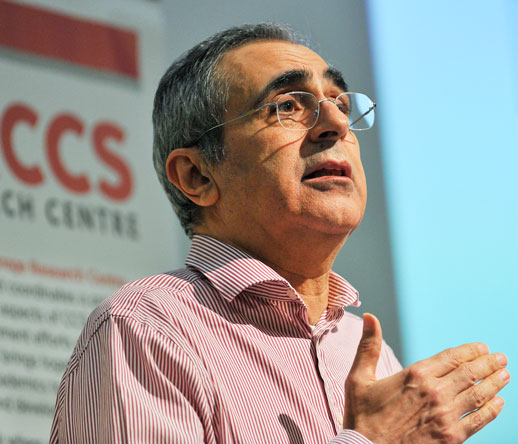 Professor Pourkashanian started his presentation by setting up the importance of BECCS in a post-COP21 environment. He stated that the retrofit of conventional coal-fired plants will be more efficient if biomass or biomass/coal blends are considered in the design process. He then provided a summary of the work carried out since 2010. He showed results of computational fluid dynamics simulations of a full scale boiler as well as process simulations of the facility and the impact of biomass combustion on the overall facility performance. He later introduced the studies carried on biomass as fuel such as its physicochemical composition and thermochemical treatments such as torrefaction and its influence on the combustion process and the emission release as well as the economic impact. He finally introduced the tests performed in the Pilot-Scale Advanced CO2-Capture Technology (PACT) facilities which include metal and aerosol release from the combustion of biomass and the impact of ash deposition and slagging on the performance of the plant. 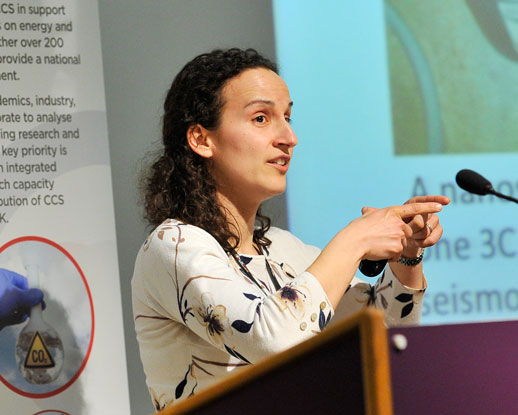 Dr Pytharouli introduced results from the use of a nano-seismic acquisition system for monitoring pressure changes in the ground of CO2 reservoirs on-site. The data acquisition system was tested as part of the Aquistore project in Canada and it consisted of 650 geophones localized at 20m depth supported by 50 seismic stations. The seismic signal was acquired from two weeks before the injection of CO2 into the ground to six weeks after. The frequencies captured by the signal were in the range of 1-100 Hz and currently they are under study. Dr Pytharouli presented the results of Ultrasonic Borehole Imaging for stress localization on the CO2 injection site as well as the fracture orientation prediction map. Finally, Dr Pytharouli showed the results of gamma ray studies over a core sample obtained at the monitoring site that are used for fracture localization across the different soil beds and for predicting future ones. Dr Pytharouli finally talked about how the results presented will influence the future policies for safe storage of CO2 underground.