Written by Xuesong Lu , a PhD student at the University of Sheffield, whose attendance at the UKCCSRC Biannual Meeting – Making the Case for CCS – in Edinburgh was supported by the UKCSRC Early Career Researcher Meeting Fund. 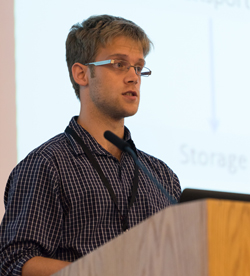 Nicholas Bryan from University of Edinburgh presented the project of Mixed matrix membranes preparation for post-combustion capture (PI: Maria Chiara Ferrari). Separation of CO2 from power plant flue gases using selective membranes is promising for low-cost carbon capture. Compared to the traditional of amine methods, the membranes can reduce the energy unitization. Under high pressure, the selective membrane can allow only CO2 from flue gases including CO2, N2 and so on, go through it and obtain high-purity CO2 gas. However, the selectivity for a given permeability specified for gas pairs (CO2/N2) is limited for traditional polymer membranes. The creative of this project is polymeric membranes with embedded inorganic particles forming mixed matrix membranes. The benefits of this method is ease of handling of polymeric membranes, high selectivity of particulate fillers and low-cost compared to pure filler membranes. The experiments showed that the membrane of PEBAX-ZIF-8 was exhibited a trade-off between selectivity and permeability. The conclusions are (1) Mixed matrix membranes offer a potential low cost carbon capture option; (2) Particles may be mobile during the drying process in the polymers; (3) A range of influencing factors such as loading rheology, casting conditions and surface tensions effects may play significant roles in clustering of filler particles; (4) The separation characteristics of polymer membranes can be altered by the inclusion of filler particles. 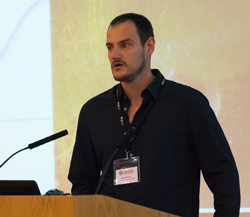 Dr Sascha Serno from University of Edinburgh presented the project of Quantifying residual and dissolution trapping in the CO2 CRC Otway injection site (PI: Stuart Gilfillan). In a CO2 storage reservoir, the disconnected droplets of CO2 in pore spaces which are immobile may cause CO2 residual trapping. Residual CO2 trapping is a key mechanism of secure CO2 storage and an essential component of the carbon capture and storage technology. The accurate data of residual CO2 trapping should be provided to commercial operators with reassurance of the predictability of their proposed reservoir size for CO2 storage residual trapping. So it needs a simply and accurate field test and monitoring technique to quantify residual trapping levels prior to large-scale commercial injection. The requirements for a successful monitoring tool should be inexpensive, simple, reliable and comparable to other techniques but at present, estimating the amount of CO2 which is residually trapped in a saline aquifer formation remains significantly challengeable. In this project, the method of oxygen isotopes is proposed. Oxygen has three common isotopes: 18O, 17O and 16O. The distribution of 18O vs 16O is variable for different oxygen sources and oxygen isotope ratio of reservoir water changes due to contact with free-phase CO2. So residual CO2 saturation can be estimated from fraction of oxygen isotopes sourced from CO2. Finally, the experiments showed that residual CO2 saturation measured from oxygen isotopes is similar to that from other independent estimates based on noble gas data modelling and pulsed neutron logging. So the method of oxygen isotopes is highly potential to be used as a reliable and cheap technique to quantify residual CO2 saturation in a single-well field experiment. The detail of this work is referred to the published paper: “Using oxygen isotopes to quantitatively assess residual CO2 saturation during the CO2CRC Otway stage2B extension residual saturation test” in the International Journal of Greenhouse Gas Control, 52 (2016) 73-83.