This capture session of the UKCCSRC Autumn 2017 biannual was focussed around the use and application of oxy-fuel technologies. It began with a talk by Professor Mohamed Pourkashanian from the University of Sheffield. Professor Pourkashanian began by informing the audience of the history behind oxy-fuel technology, namely that it was developed originally in the 1940’s due to the demand for high temperature flames for use in welding, cutting and flame polishing applications. Overtime the technology developed further and by the 1990’s the technology was firmly established as a process to capture carbon dioxide emissions at an industrial scale. Today the technology is moving towards high temperature and high pressure applications with the potential to become a zero emissions technology.

Professor Pourkashanian continued to explain the OxyCAP (Oxyfuel Combustion – Academic Programme for the UK) project which has an international foundation and led to the development of the PACT (Pilot-scale Advanced CO2-Capture Technology) facility, see figure 1. Within the OxyCAP project work was conducted at Didcot power station comparing flame conditions when biomass and coal were combusted within varying oxy-fuel conditions. This work enabled the team to study how the change in gas composition affected the heat transfer, flame temperature and distribution, and heat recovery from the system. 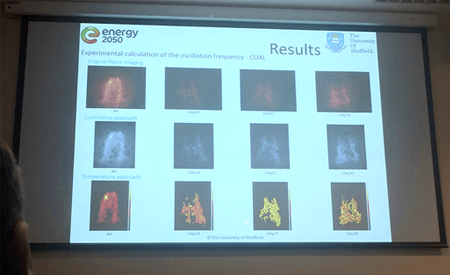 In the future Professor Pourkashanian will be working on utilising supercritical CO2 in the sCO2 project in which oxy-fuel combustion will be studied at high temperatures and pressures in order to reduce the size and cost of the reactors and make efficiency gains in the process. It was further noted that a 50 MW oxy-fired plant should be coming online later this year.

The next speaker was Dr Richard Marsh from the Cardiff University who engaged the audience in the utilisation of Exhaust Gas Recirculation (EGR) for oxy-fuel applications. Dr Marsh delivered an outline of two projects that he and his team have been working on recently, firstly though he gave a background of why EGR is important. In a traditional natural gas combustion facilities the N2 in the combustion air dilutes the oxygen concentration in order to keep the combustion temperature low enough to prevent excessive NOx formation, which in turn produces a low CO2 concentration that’s not useful for CCS. So by removing the N2 from a gas stream and replacing it with CO2 you can achieve a much higher CO2 concentration and this is in essence oxy-fuel combustion. Dr Marsh has worked on measuring the properties CO2 + O2 gas mixtures and compared them to the properties of N2 + O2 gas mixtures. Using this data simulations were carried out that highlighted the difference in flame speeds and flame temperature, which indicated that high CO2 concentrations led to the much slower and cooler flame. This was observed in a novel swirl burner apparatus at Cardiff University, shown in figure 3. It was further noted by Dr Marsh’s work that CO emissions rise when oxy-fuel gas mixtures are close to stoichiometric values due to a lower combustion efficiency and lower temperature. 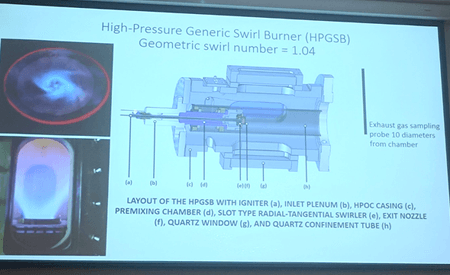 Further to this work, Dr Marsh presented the future of a new project where by improvements to EGR will be made by the use of selective-EGR. This process involves removing some of the CO2 for transport and storage prior to recirculation and mixing into the feed gases. The process intensification should lead to a smaller reactor volume requirement which will also lower the costs of the system. In some initial testing it was noted that an increased operating pressure lowered the CO emissions, although further study will be conducted to investigate ways to operate stoichiometrically.

The final presentation during this session was by Professor Xianfeng Fan from The University of Edinburgh, whose talk was on the use of compact oxy-fired CCS operations for industrial emissions reduction. Professor Fan detailed the work that had been conducted on a project recently involving the use amine solvent CO2 scrubbing in a rotating packed bed absorber combined with an innovative microwave regeneration step. The project utilised the rotating packed bed for the high contact surface area which effectively forms a thin film reactor. Multiple operational flow regimes were tested, including co- and counter-current and a new cross-current flow regime was also tested. The main result of this work was the counter-current operation led to a higher rate of CO2 removal and it could achieve this in a smaller reactor that required less power to rotate.

The use of microwave regeneration of amine solvents is a still a developing field and Professor Fan and his team have investigated multiple solvents to find out which ones are most effective at releasing CO2 with the minimal microwave energy input due to their dipole moment. Microwave heating is unique in that it minimises the wasted heating, instead of heating up an entire material to cause the release of CO2, Professor Fan has shown that due to the dipole interactions the release of CO2 can be caused by microwave induced molecular vibrations. The investigation is continuing by studying the degradation and corrosion caused by microwave heating and its potential to remove gases other than CO2.

The project also went on to model the microwave regeneration process with the use of quantum and classical mechanics which can observe the detail of specific reactions at the sub microsecond scale with incredibly accuracy. Overall process systems modelling was also conducted and compared with experimental results.

This capture session focussing on oxy-fuel technologies provided an interesting and in-depth look at the activities of other UKCCSRC member and what projects are currently underway, we all look forward to hearing more at the next biannual in Spring at Cambridge University.