Not everybody knows what DAC is!

Greenhouse gas removal (GGR) technologies are widely discussed as a method to mitigate climate change and commonly lead to heated debates. It is widely assumed that concepts such as e.g., Direct Air Capture (DAC), afforestation, geo-engineering or Bio-Energy with Carbon Capture and Storage (BECCS) could theoretically contribute to reduced (or even negative) emissions.

DAC was recently highlighted in the news with two plants starting to operate in Switzerland and the USA. Surprisingly, during a GGR session at UKCCSRC’s recent autumn meeting – a conference notoriously known to be filled with experts – the question: “What is DAC?” showed that there is plenty of research including communication to be done. 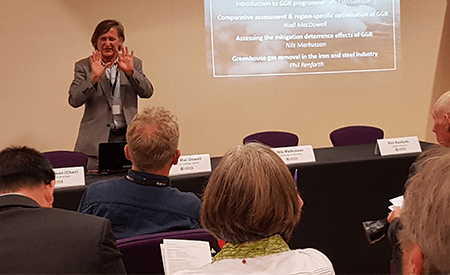 Phil Williamson chaired this session which was very well sought after, forcing Dr Niall Mac Dowell to stand before he presented an overview of the assessment and optimisation of GGR technologies. “To put it simply, the UK has holes we could press CO2 in” he said, but other countries might not have those storage capabilities. Similarly the UK certainly knows “that we cannot grow as much biomass as Brazil” which leads to the idea that Brazil might be growing biomass which is used for power generation and its captured CO2 is stored underground by the UK. 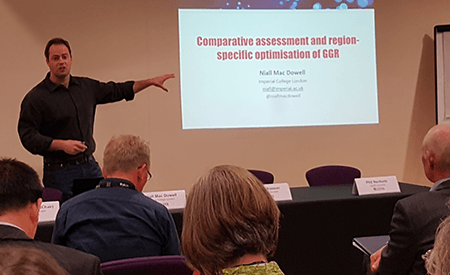 The various GGR technologies might be compared based on the classical economic analysis (CAPEX, OPEX) but this would exclude the regional boundary conditions, as seen in the UK-Brazil example. Social acceptance plays in today’s world an equally important role as technical feasibility.

It is Dr Nils Markusson who opens the door into the social sciences. To the contradiction of most engineer’s thinking, “one cannot easily talk about the problem or pin it down in one flow diagram”, he explained. “It depends so much on individual’s choices and presumptions”. Dr Markusson leads one of the scarce social science projects, assessing the mitigation deterrence of GGRs. Within this project he asks the question whether it is a reasonable assumption that GGRs will supplement mitigation.

Dr Markusson proposed to even go one step further than just evaluating today’s society: “I want to make change happen – how could we change people’s opinion on GGRs; what about the stakeholders?” Keywords like political economy, stakeholder engagement and social engineering are coming to mind. 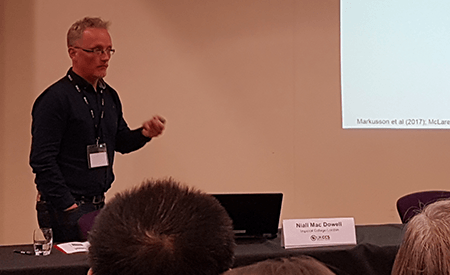 After hearing from an engineer and a social scientist the third speaker, Dr Phil Renforth, expanded the covered disciplines to the geological chemistry. Arguably his talk proofed to be taking a different turn than what the audience expected. Having titled his talk GGRs in the steel and iron industry, one expected the typical scenario of retrofitting a capture unit to a steel or iron process. Instead Phil focused on using the slug, which is a waste product during the steel manufacture for CO2 capture. His impressive field work lead to the “rediscovery” of 16Mio m3 slug stored next to an old factory which today appears to be just a hill with grass on it. 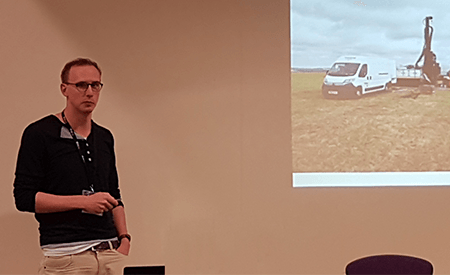 “Around 1.6 GtCO2/yr could be sequestrated in slug” he explained. The gas trapped inside the slug pile showed a CO2 concentration of around 80ppm (atmospheric air usually >400ppm) which means that the slug is actually storing CO2. However, it is less than expected and another problem would be how a pile of slag could effectively be used for CO2 capture. “The most promising option is the slag that we haven’t produced yet” Nils stated and “problems like water leaving the slag with a pH=11 impacts the environment and it has been flowing like that for 40+ years”.

Those projects show that GGRs are interdisciplinary technologies, which dictate the need bringing together researchers from classic engineering, social science and geology. The CCS community is looking forward to hearing the first results at the next Biannual in Cambridge and hopefully this will help to take down myths surrounding those technologies.