Biomass session: the past, present, and future of BECCS 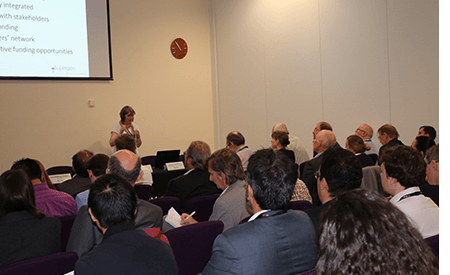 This was my first Biannual, and a great introduction to the UKCCSRC! It was useful to learn more about the research landscape and to begin to get to know the UK CCS community. The dedicated ECR programme and the support from the meeting fund certainly made me feel like I was being welcomed with open arms.

The session on Bioenergy with CCS (BECCS) was of particular interest to me, as I am based at the CDT in Bioenergy at the University of Leeds. BECCS is widely recognised as an important technology for achieving our global climate goals. It is one of the routes to achieve negative emissions, which are likely to be required if we have any chance of staying below the Paris Agreement’s 2°C limit. The importance of BECCS was emphasised in several sessions, such as the session on Greenhouse Gas Reduction, and the presentation given by Mike Hemsley from the Committee on Climate Change. The parallel session on Biomass focussed on certain aspects in more detail.

The session opened with Patricia Thornley, leader of the SUPERGEN Bioenergy Hub, who emphasised the importance of biomass in the current energy mix – last year in the UK,  bioenergy provided more renewable energy than any other technology type. Patricia also looked to the future, describing a study which has explored BECCS in power generation from co-fired coal and biomass, to estimate which co-firing ratio could achieve net negative emissions. We were introduced to some of the other interesting topics within bioenergy – for example, some research has examined the air pollution from domestic biomass boilers. Air pollution is a pressing public health issue, and so it is important to understand the role of small-scale decentralised systems, such as domestic heating, where pollutants are particularly challenging to monitor and control. Finally, Patricia explained the role of the SUPERGEN Bioenergy hub and discussed opportunities for collaboration with CCS researchers, inviting attendees to a series of workshops on research priorities.

Next up was Ed Lester from the University of Nottingham, who discussed the development of new techniques to characterize biomass. Over years of coal use, we have developed a good understanding of coal so that it can be used safely, reliably and efficiently in large processes. However, replacing coal with biomass feedstocks poses new challenges, and it is important to be able to characterize the fuels so that we can understand and predict their behaviour. Imaging techniques can be very challenging to use on biomass, so a number of new methods of analysis have been explored.

To close the session, Karen Finney updated the audience on the activities at the pilot scale facilities at UKCCSRC PACT. Karen discussed the importance of BECCS, but also highlighted technical research challenges, such as the handling of feedstocks and the quantity of inorganic constituents in biomass fuels. Previous work at PACT, supported by the UKCCSRC, has obtained novel and important data on BECCS, while also opening up new areas of research. For example, if BECCS becomes widely deployed, we will need a lot more fuel – what other sustainable biomass fuels could we use? Karen described future work at PACT, which will be supported by the latest round of UKCCSRC funding. This includes technical issues such as the effect of pollutants on capture processes, but also some work on systems and policy.

The variety of topics covered in the biomass session just goes to show the range of challenges and opportunities in biomass use, especially when it is combined with CCS. These are not only technical, but also branch across a range of other areas, such as policy and social aspects. Collaborations within research communities, such as those offered by the UKCCSRC, will play a key role in helping us to embrace these opportunities and find technical solutions that work for society.