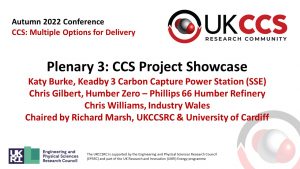 At the final plenary session of UKCCSRC Autumn 2022 Conference held in Edinburgh on the 8th September, three interesting carbon capture and storage projects were showcased, focusing on the application of CCS technologies around the UK.

Firstly, Katy Burke, Lead Design Engineer for the Keadby 3 Carbon Capture Power Station project supported by SSE Thermal, introduced the UK’s first power plant equipped CCS technologies – Keadby 3. SSE Thermal is one of the main power plant operators in the UK and was one of the leaders in developing the flexible generation of power stations and storage facilities. 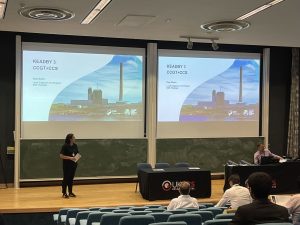 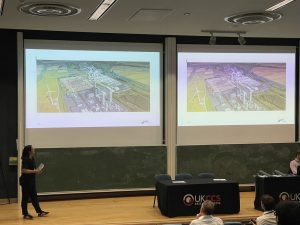 This combined cycle power plant (CCGT) can have a 700-800MW output in abated mode and is part of the Zero Carbon Humber section of the East Coast Cluster. This project is just about to begin, as a Front End Engineering study was awarded in May 2022 and its designed CCS ability was 1.5M tonnes of CO2 per annum. This remarkable value can contribute to at least 5% of the administrative control’s target and the team will keep focusing on the technical and political development including CO2 transport and storage network construction and the study of the dispatchability of CO2 capture rate. 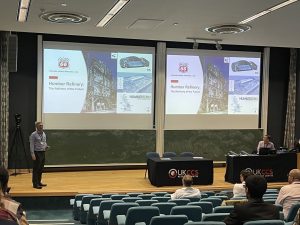 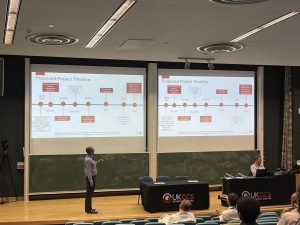 Timeline of the projects Humber Zero

The fluid catalytic cracking (FCC) project was one of the most representative parts of Humber Refinery, beginning in 2020. Funded by BEIS, this project applies a post-combustion CCS technique and is at the stage of selecting appropriate CCS technologies and waiting for construction. This project will have a great influence on the local area and the nation, such as creating new job opportunities and inspiring other industrial investment for low carbon application. 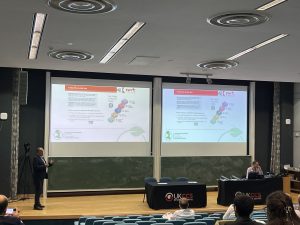 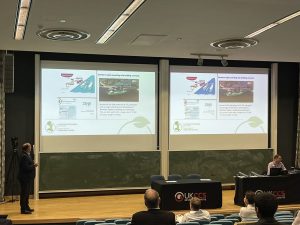 Finally, Dr Chris Williams, the nominated lead of the South Wales Industrial Cluster, gave a brief presentation on the development of the South Wales Industrial Cluster within the flamework of Net Zero 2050 Goal (NZG 2050). As one of the eight industrial clusters in the UK and the only one in Wales, it continues to achieve the NZG2050 by five steps: resources and energy efficiency, fuel switching, smart networks, carbon capture & utilisation and carbon capture and storage.

The project Cavendish kickstarted a hydrogen economy in the Southeast of England. This project can produce 700MW of blue hydrogen and 1.2M tonnes of CO2 can be captured per year. In this project, Northern Lights has built two giant CO2 carriers for transportation, and they will be used for offshore storage or other utilisations in cooperation with various companies such as Shell, Tata Steel and RWE.