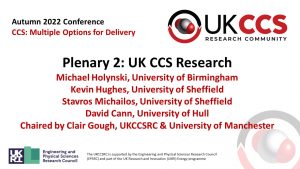 Day two of the conference kicked off bright and early so, with a coffee in hand and a belly full of breakfast, we sat ready for the second plenary, the focus of which was on UK based CCS researchers presenting their latest work thanks to the flexible funding provided by UKCCSRC. 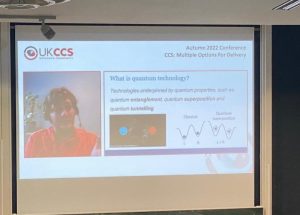 First up was Dr Michael Holynski from the University of Birmingham, presenting his work utilising quantum properties of atoms for application within sensor technology and CCS. Quantum technology-based gravity sensors use “cold atoms” as a sensing element (no they don’t have woolly hats on!). The use of cold atoms as gravity sensors has lots of application within CO2 storage as it offers greatly improved rejection of ambient seismic noise compared to conventional gravity sensors. With the theme of the conference being multiple options for delivery, Michael’s talk encapsulated the message that developing this novel technology would provide an unprecedented amount of high-quality data which, when used in conjunction with existing monitoring technology, will enable a significant leap in our ability to understand and manage CCS storage sites, further expanding our options for multiple deliveries.

Dr Kevin Hughes was up next discussing the work of his group on amine atmospheric chemistry using molecular modelling and Atmospheric Dispersion Modelling System (ADMS) simulation. His work focuses on simulating a range of amines and its interactions with the atmosphere. Having listened to John Henderson the previous day and hearing about the regulation issues surrounding CCS, the research being presented by Kevin is key in informing our decision-making understanding of how escaped amines for absorption-based carbon capture react with the atmosphere. By providing evidence of the various reaction mechanisms which amines can undertake, this research will provide insight for the regulators as to what harmful molecules could be produced if amines do escape. Kevin’s talk highlights the need for multi-scale modelling and understanding how molecular-scale interactions can inform models on a larger scale.

Dr David Cann from the University of Huddersfield, presented in-person on the use of electrical capacitance tomography (ECT) to study CO2 frost formation during cryogenic carbon capture. This work was also supplemented by a poster presented by ECR Yuan Chen.

From the presentation, we gained a detailed understanding of how CO2 cryogenic separation works as well as its advantages and disadvantages. By lowering the temperature in a packed bed, CO2 undergoes desublimation and forms a frost on the bed packing. This frost advances along the column and it is hoped ECT sensors can be used to detect the position of this frost front, therefore allowing operators to know when the bed requires regeneration. The ECT sensors are wrapped around the outside of the packed bed column and measure the differences in relative permittivity between media within the bed.

This was the first study to use ECT sensors to detect CO2 frosting through spatially resolved frost imaging. As such, the talk focused on overcoming the challenges resulting from this novel approach and key experimental findings which will then be used to improve upon further work. One such example was the need to have bed material of extremely low relative permittivity to avoid signals from the bed packing interfering with signals from the CO2 frost. Simulations were also used to design the ECT sensors. A highlight for us as ECRs was when David mentioned this project was a result of networking from a UKCCSRC ECR awayday, which highlights just how useful these events are for networking and research inspiration.

Dr Stavros Michailos from the University of Sheffield Transitional Energy Research Centre (TERC) finished up the session by presenting a modelling study on the use of molten carbonate fuel cells (MCFCs) for CO2 capture via the production of Sustainable Aviation Fuels (SAF). This process involves the reaction of Hydrogen with carbon dioxide to form naptha, jet fuel and diesel. Roughly 4kg of CO2 is used to create 1kg of useful hydrocarbons.

For this study, a 2D Multiphysics model was developed and validated against existing literature. The model suggests the process is an efficient capture technology with energy penalties comparable to traditional systems. Future work will involve the development and implementation of kinetic models to increase the accuracy and precision of the final model, with hopes to publish the presented data in the coming months.