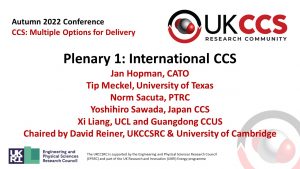 The first plenary session of the UKCCSRC Autumn Conference was focused on the international perspective on CCS delivery. We heard from experts on the status of CCS in the Netherlands, USA, Japan and China, and the outlook for future growth. This gave an excellent insight into the role that CCS must play as part of global government policies to meet their commitments to net zero. The speakers described the drivers that are promoting the rapid deployment of CCS technology around the world and gave details of the many exciting CCS projects taking place and in development.

Jan Hopman delivering his talk on CCS projects in the Netherlands

Jan Hopman was the first speaker, from CATO, a Dutch CC(U)S R&D Consortium with industry, SME, universities, and NGO partners. According to the Paris agreement, he emphasised the importance and urgency of net-zero actions. There are eight projects for CCS in the Netherlands, but two have been stopped due to a lack of funding. Yara and Northern Lights have signed the world’s first commercial agreement on cross-border CO2 transport and storage of about 0.8 Mtpa.

AVR and Twence are the other projects focusing more on waste-to-energy and supplying liquid CO2 as a fertiliser for greenhouse horticulture. Dr Tip Meckel promised the prospect that by 2050 nearly 120 Mt of carbon per year would be stored in the earth’s reservoirs, which will be equivalent to $1.2B carbon tax per year.

Norm Sacuta from the Petroleum Technology Research Centre (PTRC) then gave a talk on CCS in Canada. He started with an introduction to the Government of Canada Tax incentives for CCS. A new $2.6 billion investment tax credit will be available starting from 2022-2023, which is a refundable credit for businesses that capture and permanently store or utilise CO2. Six proposals were chosen to develop Canada’s first carbon storage hubs in Edmonton, the “industrial heartland” for petrochemical processes. He finished his talk with an update on PTRC’s Aquistore Project, a deep saline CO2 storage project integrated with SaskPower’s Boundary Dam Facility in Saskatchewan.

Moving on to East Asia, Yoshihiro Sawada from Japan CCS Co. Ltd. presented recent developments in Japan. Annual CO2 storage in Japan is estimated to reach 120 to 240 Mt by 2050. The Japanese government aims to finalize the CCA long-term roadmap by the end of this year. The talk continued with an introduction to the Tomakomai demonstration project, where CO2 generated by hydrogen production is transported offshore for reservoir storage. Mr Sawada then talked about the world’s first CO2 ship transportation project, aiming to transport ~10,000 tonnes/year of liquified CO2 from Maizuru coal fired power plant to Tomakomai. 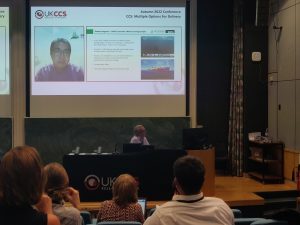 The final talk was delivered by Xi Liang from the UK-China (Guangdong) CCUS Centre and gave a fantastic update on the progress in CCS uptake across China. The PRC will require capture of 440 Mt of CO2 per year by 2050 as part of its commitment to net-zero emissions by 2060. Xi explained how the rate of CCS developments in China has increased dramatically since the net-zero commitment was introduced. He gave details of the projects planned for implementation in power plants as well as the first CCS projects to be developed for the steel and cement industries, which account for a substantial portion of China’s emissions.

The talks from all these international speakers gave an extremely valuable and rare insight into the status of CCS technology across the world. The speakers provided us with great detail on a wide range of exciting projects across many industries. As researchers, this has shown us the rate at which CCS technology is growing and increased our understanding of the context surrounding our own research work.