As a relative newbie to the CCS world, I’d not had the pleasure of attending a GHGT conference until last week. I’d heard great things from my colleagues about GHGT-11 in Kyoto but was feeling slightly intimidated knowing over 1100 delegates were expected at GHGT-12.

I decided my best plan of attack was to arm myself with a list of people I had to meet while I was there (the disadvantage of working in a virtual research centre is not getting to meet CCS researchers in person very often) and a list of technical sessions that I wanted to attend to brush up on what’s happening in the storage research world.

And so away on the 18 hour trip to Austin, Texas, I went…

It is fitting that Texas would be our host – in an oil and gas ‘golden age’, the industry has been booming here since 2010. The host city, Austin, however seemed less like its ‘gas guzzling’ counterparts – yes, traffic jams were something to behold but the city is noticeably pedestrian and cyclist friendly. Austin feels young, vibrant and is home to a massive music scene, helped probably by the large student population at the University of Texas in Austin. In fact, the Austin City Limits festival which was on the same week as GHGT-12 is an annual 3-day event with over 130 acts performing before an audience totalling nearly 200,000 people. 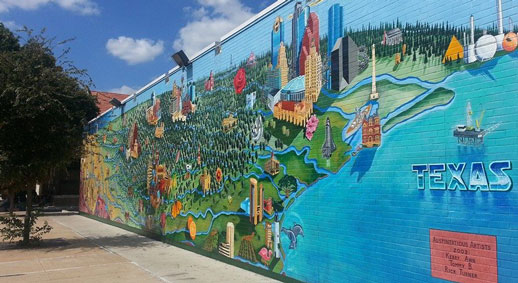 GHGT-12 kicked off with a laid back reception which included a very varied mix of entertainment: stilt walkers, traditional dancers, singers, music from authentic mariachis, magicians and a string quartet! It was down to business the next day, for Day 1 of the conference though, with the opening plenary session commencing at 8.50! An early start some might say but not so when you’re jet lagged and have been awake since 5.00!

My key take away from this session was a quote delivered by Juho Lipponen, IEA, but taken from Barack Obama’s speech at the UN Secretary-General’s Climate Summit in New York last month. He said “We are the first generation to feel the impact of climate change and the last that can do something about it”. Motivated by this piece of wisdom, I hurried off to attend some technical sessions but more importantly to finalise plans for the Networking Reception UKCCSRC were holding that evening with our international partners, CMC and CO2CRC.