This blog was written by Thomas Spitz who is a PhD student at the University of Edinburgh and received funding to attend the Manchester Biannual Meeting from the UKCCSRC ECR Meeting Fund.

It was Tim Dixon’s challenging task to set the scene and restore a positive atmosphere amongst the conference participants in the light of the recent cancellation of the UK CCS competition. What can be said already at this point is, that he succeeded elegantly. This was not only due to his charismatic speaking, but also and importantly a result of the coherent chain of facts he presented. 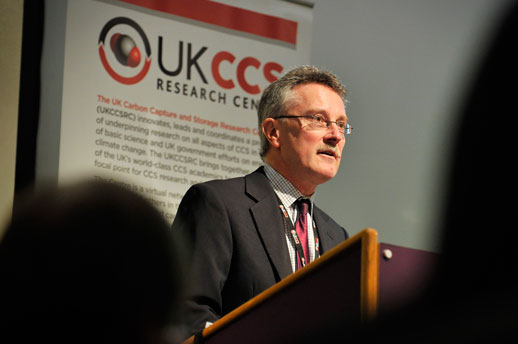 Tim focused on the bigger, global picture immediately. He reviewed the recent history and developments of the climate negotiations and the place CCS took in it. He spoke about the disappointing Copenhagen Summit (2009) and COP17 in Durban (2011), and how the momentum was there in the aftermaths of the long history of unsatisfactory conferences to change climate strategy radically onto a more sustainable pathway. The ground seemed fruitful for the COP21 and indeed a vast majority of the countries – accounting for over 80% of the world’s emissions – handed in INDCs (Intended Nationally Determined Contributions) as preparation for the conference, that were estimated to limit global warming to 2.7oC by 2100. In fact COP21, organised under French leadership, was the largest ever COP that been carried out. The attendance of the sheer number of participants and heads of state shows how high the topic is on the political agenda. The signing of the agreement, scheduled between the 22nd April 2016 and the 21st April 2017 at the UN headquarter in New York, will break further records. The ceremony is being expected to become the event with ‘the largest number of countries signing anything at the same time’.

After having outlined the recent history of climate negotiation in general, Tim went into more detail about the role CCS has played in it, and the development it has gone through. He started off with pointing out the central role the 2005 Special Report published by the UNFCCC on Carbon Dioxide Capture and Storage had in raising the profile of CCS amongst the expert community dealing with climate change mitigation strategies. Since its publication, CCS has widely gained acceptance as an important climate mitigation technology, which has not been self-evident and needed intense educational as well as lobbying work. A major step for this was a 2011 workshop in Abu-Dhabi, in which policy makers were able to spend sufficient time with technical experts to address their concerns and knowledge gaps. Since then, Tim has seen the questions from policy makers in regards to CCS as a climate mitigation tool shift substantially from ‘Is it safe and possible?’ to ‘How can we do it?’. Underpinning the need for educational work, and speaking for itself, the technical information sessions of the IEAGHG at the COP21 meeting were extensively used by delegations of individual countries making them one of the most popular side events at the conference.

Finally, Tim concluded with an outlook on the extensive work that still needs to be done, in the follow-up of the COP21 conference and in the attempt to reach the 2oC or 1.5oC target, in particularly as INDCs currently only allow limiting the global temperature increase to around 2.7oC until the end of the century. A vast amount of work needs to be done on the details of the technical implementation of the emission reductions strategies by the individual countries before a legally binding treaty can be signed. Further, it is now down to the IPCC to produce a report analysing how a 1.5oC global temperature increase scenario can be reached. And lastly, the message was given to the audience, that although only 10 countries explicitly imply the usage of CCS in their INDCs, the fact that emission reduction goals are set in a technology neutral way means that CCS has not lost any of its potential through the recent developments. In contrast, CCS must remain focused as ever before on delivering emission reductions when it is asked for in the near future.