Written by Mohammed Aminu , a PhD student at Cranfield University, whose attendance at the UKCCSRC Biannual Meeting – Making the Case for CCS – in Edinburgh was supported by the UKCSRC Early Career Researcher Meeting Fund.

I was part of the September 2016 Edinburgh Biannual meeting organised by the UK Carbon Capture and Storage Research Centre, held at the John McIntyre Conference Centre, The University of Edinburgh. Before the meeting began, an optional field trip was organised with the view of taking us a step back in time to discover the journey of carbon dioxide.

We began the field trip at the National Museum of Scotland where participants were met by Dr Tacye Philipson, the Senior Curator of Science in the museum. The purpose of visiting the museum was to see exhibits about Joseph Black (1728 – 1799) and the discovery of carbon dioxide. Dr Philipson took us through some of Black’s exhibits such as equipment (e.g. glassware and measuring balance) which he used in carrying quantitative experiments that lead to the discovery of carbon dioxide.

We also saw other important exhibits such as apparatus and chemicals which were found during a 2011 excavation in the Old College Quad of the University of Edinburgh. The exhibits were said to be left in Black’s storerooms and laboratory during the demolition of 1790s. 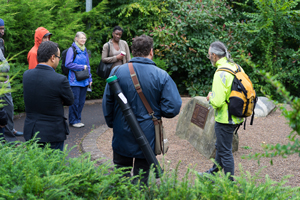 At the Hutton’s memorial garden (believe to be the former home of James Hutton (1726 – 1797)), Dr Stuart Gilfillan of The University of Edinburgh, illustrated Hutton’s geological discoveries using a few boulders that were found at the memorial garden. We saw a conglomerate with fragments and older rocks which depicted the continuity of geologic processes through the past and until present day. The geologic process of cross cutting relationship which illustrates the intrusion of a younger rock into an older rock was also illustrated using one of the boulders at the memorial garden.

Another interesting part of the field trip was the visit to Hutton’s Section—where James Hutton observed rock formations that helped to form his geologic theories. Particularly important lesson learnt at the Hutton’s Section was how Hutton used the idea of extreme heat as an agent for folding and uplifting of rock.

Overall, the field trip provided an important opportunity to see and appreciate the scientific contributions of both Joseph Black and James Hutton.