ECRs write about the UKCCSRC Plenary session 2: Capacity development within clusters – CO2 transport and storage plans, on day two of the UKCCSRC 2022 Spring Conference. The University of Sheffield hosted the UKCCSRC programme conference on the 20th and 21st April. It saw national and international experts come together to discuss the building capacity for Carbon Capture and Storage (CCS) deployment. The last session of the UKCCSRC Programme conference in Sheffield was focused on what was achieved and future plans for CO2 capacity development at different clusters, chaired by Jon Gibbins, from UKCCSRC. 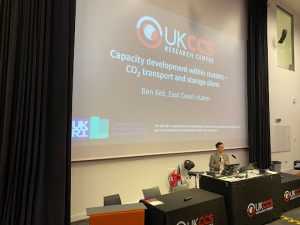 The first speaker, Ben Kek from BP, illustrated that the North East Cluster is now actively bringing together communities, business, industry and academia to deliver the carbon capture and storage (CCS) infrastructure needed to remove 50% of the UK’s industrial cluster CO2 emissions. He continued to illustrate the North East Cluster selected as one of the first two carbon capture, usage and storage clusters to be taken forward by the Government. In March 2022, 25 individual decarbonisation projects within the North East Cluster were shortlisted having met the Government’s eligibility criteria. The shortlisted projects will now proceed to the evaluation stage and will be eligible for government business model support and investment will be unlocked in the future. He also highlighted that CCS projects at the North East Cluster could protect thousands of jobs and ensure the UK’s leadership in the energy transition and the emerging global low-carbon and hydrogen market and play a major role in leveling up across the country. 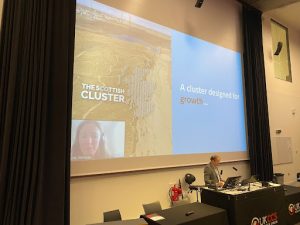 The next speaker, Kirsty Lynch from Storegga, introduced the Scotland cluster in the building capacity for CCS deployment. She highlighted that Scotland is a cluster designed for growth. She explained Scotland has advantages in large geographic areas and diverse sources of CO2. She pointed out that Scotland is actively seeking a huge storage resource and transport infrastructure of international significance. She also highlighted that European projects of common interest could increase flexibility and reduce costs and allow the involvement of more European countries in CCS projects. 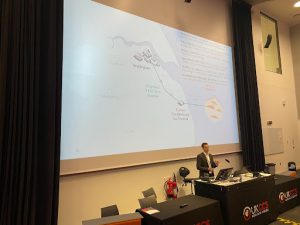 Andrew introduced the CCS of Harbour Energy, with the first storage by 2027 and a credible route to rapid development for at pace capture, as well as the 12.5 MTPA storage in well-defined, low-risk depleted gas reservoirs by 2033. More importantly, 900+MWth blue Hydrogen generation is under development. The strategic locations are around the Immingham SuperPlace, south of the Humber and an existing highly integrated industrial cluster. Working together with ABP, owners of the UK’s busiest port complex, CO2 shipping is developing. The installation of new infrastructure-V Net Zero Pipeline- and reuse of LOFFS pipeline are applied for gas storage. 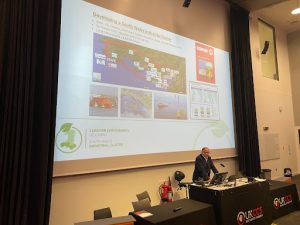 The Welsh government has been working with the Climate Change Committee (CCC) and the UK Government to determine what the Net Zero ambitions would mean for Wales and its economy. In its December 2020 Advice Report to the Welsh Government, the Climate Change Committee (CCC) recommended that the Welsh Government should, in fact, now set a Net Zero target for 2050. In March 2021 the Senedd legislated for a net zero 2050 target, along with interim targets for 2030 (63%) and 2040 (89%), and carbon budgets throughout the 2020s. Dr Chris Williams is the nominated lead of the South Wales Industrial Cluster. The  South Wales Industrial Cluster includes the steel, oil, cement, nickel, insulation, paper, general manufacturing, etc, with famous companies such as CABOT, EASTM, TATA STEEL, BOW, RWE, etc. It offers 10 MTPA industry and 6 MTPA power. 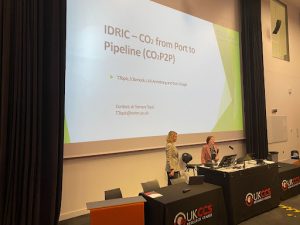 Dr Lindsay-Marie Armstrong and Dr Tamara Topic, from University of Southampton, introduced the project of CO2 from port to pipeline (CO2P2P). First, Dr Vincenzo Spallina introduced the Southampton/Solent industrial cluster estimated to have 2.6 megatonnes of CO2 emission per year. She presented a techno-economic model will be developed to optimise transportation of CO2 from ports in the East and South of the UK, supplied from industrial clusters delivering CO2, to the geostorages. Dr Tamara Topic introduced in detail the CO2 carrier ship design optimisation from the following aspects: ship size, optimal speed for short and long shipping routes, ship stability, ship loading approaches, consideration for net-zero emission ship propulsion. In addition, expected results of the proposed CO2P2P techno-economic model are included in the project (such as number of ships needed, energy of CO2 transport and costs of different scenarios). 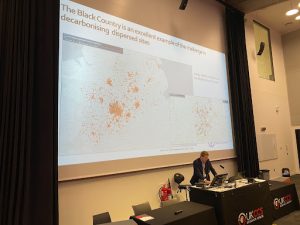 The Black Country, which looks forward to working with Professor Mareto-Valer and IDRIC on the general challenges facing the decarbonization of the UK industrial economy, was introduced by Matthew Rhodes as one of the major industrial clusters supported by the UK Industrial Decarbonization and Research Innovation Center (IDRIC). The speaker discussed the partnership initiatives that are being developed in collaboration with other clusters and IDRIC, with an emphasis on world-class academic competence. “We are thrilled to engage with the cluster plans and deployment projects to drive cross learning and improve and expedite the impact of activities across the industrial decarbonisation issue,” stated a speaker in support of Professor Mareto-Valer. We’ll work together to create a whole-systems strategy that includes engineering, environmental, and technical solutions.

The Speaker – Rachel presented objectives and contributions of HyNet in achieving net zero carbon emissions. HyNet seeks to build infrastructure in the North West and North Wales to produce, transport, and store low-carbon hydrogen with the tendencies of leading the low carbon energy innovation and transition worldwide. She highlighted that by 2030, the team will reduce CO2 emission by 10 million tonnes every year and fossil fuels would be replaced with low carbon hydrogen. The facilities to capture CO2 emissions, and underground pipelines for transporting CO2 emissions to safe storage are in place. Currently, there are ongoing partnerships with gas distribution renewable and engineering consulting companies to deliver on the project’s infrastructure. 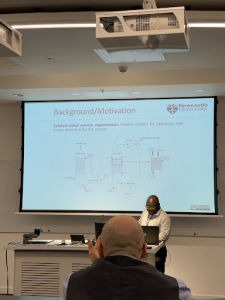 The speaker reported his team progress on modelling and simulation of catalyst-aided solvent regeneration in Post – Combustion Capture Process. The team reported extensive literature review, analysis of different catalysts, suitable solvents, collaboration with the University of Regina in Canada, and support from UKCCSRC. The application of post-combustion CO2 capture technology was reported to be highly imperative to mitigate the adverse effects of CO2. The implication of conventional PCC systems was stated to include an enormous amount of energy requirements, lower CO2 absorption-desorption, and high operational costs. The benefits of catalysts-aided solvent regeneration was reported to include: reduction in regeneration energy in post-combustion carbon capture process, and CO2 increased desorption rate.