As part of our Spring Conference ECR blog series Mohaned Aboshatta, University of Strathclyde, Xu Yang, University of Nottingham, Serap Ozmen, Cranfield University, write about the Core Research session 1A: Capture, on day one of the conference. 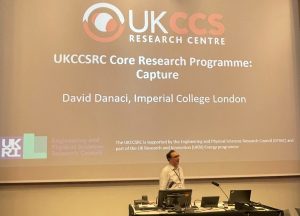 Chemical looping combustion (CLC) is a promising alternative to the conventional combustion-based, fossil fuel conversion processes. With the participation of oxygen (O2) carriers, a sequestrable stream of carbon oxide (CO2) is inherently produced which allows efficient carbon capture and has the potential to achieve zero carbon emission. To better improve this technology, Fennell group and Petit & Mac Dowell groups had developed a new type of oxygen carrier material which was verified in an optimised CLC process.

This work was presented by Dr David Danaci from Imperial College London. Under the effort of researchers, a new CuMn HTlc material (mixed metal oxide) was confirmed as a promising O2 carrier with fast kinetics, good working capacity and good stability. It is noted that under the developed novel synthesis system from Dr. Danaci et al. this material can achieve larger scale production in kilograms. With the pressure and vacuum swing adsorption (PVSA) and other novel adsorption processes, this optimised CCS system was expected to achieve 99 % CO2 capture rate for its applications in industries.

However, Dr. Danaci gave some suggestions about the further development of this system. The CuMn HTlc can be optimised, and the Temperature (and vacuum) swing adsorption process was under development to overcome the disadvantages of PVSA. Besides, Dr. Danaci also mentioned that a techno-economic analysis, energy reporting and design guidelines need to be proposed in the future. He concluded that to achieve zero carbon emissions, a multi-pronged approach is required, including negative emission technologies (NETs). 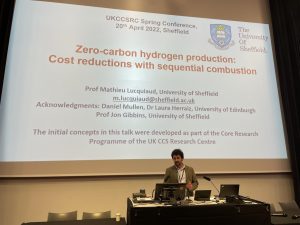 Demand for low carbon sources of hydrogen and power is expected to rise dramatically in the coming years as countries decarbonise their energy systems in order to meet their climate change responsibilities. Professor Mathieu Lucquiaud from the University of Sheffield presented the recent advances of producing hydrogen with zero carbon electricity generation system. Both combined cycle gas power plants and steam methane reformers have the ability, when combined with carbon capture utilisation and storage (CCUS), to produce large quantities of on demand, low cost and near-zero carbon hydrogen and power respectively.

As the infrastructure of CCUS contributes to decarbonising industrial clusters, both hydrogen and power will be produced in the same system, taking advantage of common infrastructure for electricity grid connection, the CCUS network and natural gas supply. 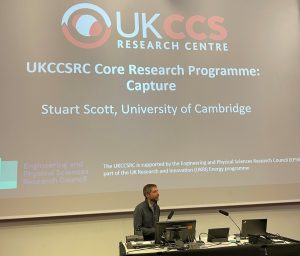 At the end of the session 1A, Stuart Scott, Professor of Energy and Thermodynamics at University of Cambridge, was on the stage to give a presentation about “Carbon capture and follow-on work”.

The main titles of his presentation were a) next generation CO2 capture technologies and processes, b) solid sorbents and oxygen transfer materials for carbon capture and c) fixed-bed processes. It was an informative presentation. For me, the most attractive part of his presentation was the last part when he explained the limitations of the fixed bed reactors in chemical looping air separation process (which generates streams of oxygen at high temperature oxyfuel production with chemical looping reactions). He and his team found that the materials which has high ∆H are not suitable for packed-beds but ideal for fluidised bed reactors. 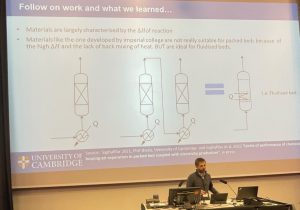