A blog containing contributions written by Kazeem Rabiu a PhD student at Loughborough University and Xuesong Lu, a Research Associate at University of Sheffield who both received funding from the UKCCSRC’s ECR Meeting fund to attend the Manchester Biannual meeting. They both covered the same parallel session.

The UKCCSRC Spring 2016 biannual meeting at lunch time on 13 April 2016. The theme of the meeting was ‘CCS in the UK: Moving forward’. Researchers on CCS in in attendance were from various institutions and industries worldwide.

On the 14 April 2016, the parallel sessions (including Industry CCS, Offshore CCS and Social Research in CCS projects) took place between 9.30am to 11.00am. The Social Research in CCS Projects session was chaired by David Reiner, a renowned researcher in the field of energy at University of Cambridge; the speakers were Sarah Mander (on behalf of Rebecca Cunningham as she was unable to attend) and Clair Gough both from Tyndall Centre, Manchester and Dimitrios Xenias (Cardiff University). The chair opened the session and gave an overview of social research in carbon capture and sequestration projects. Thereafter, Sarah Mander presented on CCS knowledge networks, explaining online and offline communities. Her presentation focused on the flow of CCS knowledge between an offline (Tees Valley, UK) and online using social network such as twitter among community of CCS stakeholders. Sarah described the collection of relevant data; empirical offline data was collected from relevant stakeholders during interviews and the online data was acquired using a Twitter API from the distinct period immediately after the completion of interviews. She concluded that CCS information within the Tees valley region and on Twitter may not reach the general public as both online and offline knowledge networks served particular audiences.

Next, Clair Gough explained the societal responses to CO2 storage; the media, stakeholder and public perspectives. The results of empirical research was explored with the aim of describing societal responses of CO2 sequestration and monitoring techniques, formulating the concept of social license to operate (SLO). SLO is termed as informal permission given by local communities and larger institution to industries to establish scientific projects. She described a mixed method approach which include media content analysis around four events, interviews with stakeholder and focus groups in two case study areas in UK. She stressed that the perceptions of trust and confidence to manage the projects securely is greatly dependent on the past experiences with different advanced technology and track records of the institutions that is managing the projects. Moreover, establishing a SLO for CCS are presently effective; integrating and maintaining that support depends on developing industrial, social, and political terrain.

The last speaker was Dimitrios Xenias and discussed the engagement of the public with CCS and the learning from experts. He stressed that carbon capture and sequestration is very important in transitioning to a low carbon economy. He mentioned that interviews were conducted to thirteen CCS experts from UK, Norway and the Netherlands between November 2015 and January 2016 on the barriers of CCS installation and public engagement with CCS and possible way of addressing them. Finally, questions were asked from the speakers and the session was concluded.

I received the UKCCSRC’s ECR Fund to attend the Spring 2016 Biannual meeting of CCS in the UK: Moving Forward at Manchester from 13-14 April 2016. This meeting attracted more than 100 delegates from different Universities and companies. I really enjoyed this relaxed meeting, delicious food and the rich coffee. I also made lots of nice friends in the research area of CCS and we all delightedly exchanged our bold ideas about CCS and discussed the bright future of CCS.

On 14 April 2016, I attended the parallel session for Social Research in CCS Projects. This session talked about how social media, network and policy response and support CCS, including topics of (1) Social responses to CO2 storage: media, stakeholder and public perspectives; (2) CCS knowledge networks-exploring online and offline communities; (3) Engaging the public with CCS: learning from experts. Different people response to CCS with different attitude. What is CCS? Why do we need it? Where do we store CO2? What kind of energy should be used in the local place? Some local people care about jobs, clean environment and how to maintain carbon budget. Some local people care more about safely storing CO2 and storing it away from places where it might cause an earthquake and safety regulation. Research shows the indication for achieving a social license to operate for CCS is positive. How does CCS knowledge spread in offline and online communities? The research used social network analysis to investigate the interaction between entities for connection and sharing CCS information from media sources based on region, gender and organization. The offline community is for industrial CCS. The online community is from Twitter. A range of people would like to promote, expand, transmit and share of CCS information. Public acceptance of large scale CCS is crucial, so the aim of the research is to explore factors that determine public and stakeholder understanding CCS and what are main barriers are that prevent CCS rolling out. It is important to engage the public with CCS and it is needed to include emphasis on CCS for heavy industry. It recommends Policy to support public. As a researcher, I know very well that globe warming and climate change could bring disasters to the human beings and CCS is critical to our life, but I did not realise that the public has different attitudes and responses to CCS.   In order to protect our planet and for the benefits of our human beings, everyone should take responsibilities to share my knowledge of CCS with friends and neighbours and make local people all support CCS.

Finally, I would like to thank UKCCSRC for the funding and providing me a good chance to meet friends and listening to good reports. 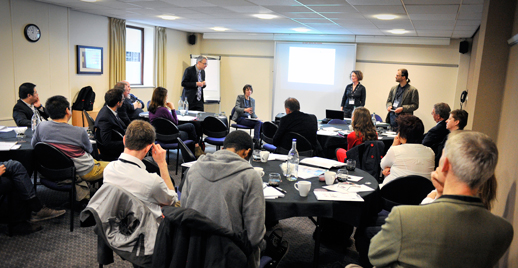