This blog was written by Muhammad Akram who is an Early Career Researcher at the University of Sheffield and received funding to attend the Manchester Biannual Meeting from the UKCCSRC ECR Meeting Fund.

The UKCCSRC Spring 2016 Biannual, CCS in the UK – Moving Forward, was held at the Manchester Conference Centre on Wednesday 13 – Thursday 14 April 2016. The first day of the meeting featured a poster session in the evening. The session began at 6pm with drinks available in the Pioneer Room of the Conference Centre. There was wide variety of drinks available although I myself stuck to a glass of orange juice. The event was great opportunity for networking and meeting champions of different fields of CCS, and it was interesting to see that the posters covered a wide range of CCS aspects. There were around 15 posters covering topics from capture to storage and from conventional MEA solvents to novel rice husk based bio carbons.

Due to my knowledge of the solvent-based post-combustion CO2 capture process, I was particularly interested in the poster titled “Dynamic and flexible operation of post combustion capture – A pilot scale test campaign with online solvent monitoring”, a joint project of Sulzer and UKCCSRC by Tait et al. The PI of the project Mathieu Lucquiaud was available for any questions. In order to design and develop new instrumentation and operational strategies and control systems, understanding of the dynamic and flexible operation of capture plant is very important. The authors explored the response of the capture plant, in terms of the variation in CO2 capture rate and CO2 loadings as a function of time, to gas turbines start up, shut down and reboiler steam shutdown.  The performance of the online solvent monitoring system was encouraging as it was consistent with the results of titration analysis. 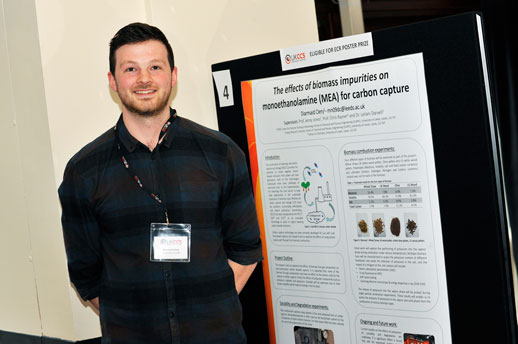 Another poster which attracted my attention was “The effect of biomass impurities on monoethanolamine (MEA) for carbon capture” by Diarmaid Clery of University of Leeds. The use of biomass for power production and capturing CO2 is argued to offer negative CO2 emissions. The effect of biomass flue gas compositions, particularly the presence of potassium compounds on the post combustion capture process, is the main aim of the project. It is known that the presence of potassium compounds may enhance the degradation of solvents, however, an argument made by the authors that potassium salts may increase the rate of CO2 absorption is very interesting.

A very important aspect of CCS, keeping balance in the energy trilemma, was covered by a poster titled “Quantifying the value of CCS-equipped power plants” by Clara Heuberger et al. of Imperial College, London. They quantified the system value of a power technology through whole systems modelling. Flexibility of CCS power plants, as described by Tait et al., is also discussed by Clara et al. from a renewables point of view and it was pointed out that an additional value of flexible CCS power plants is that a larger share of intermittent renewables can be accommodated in the electricity system. 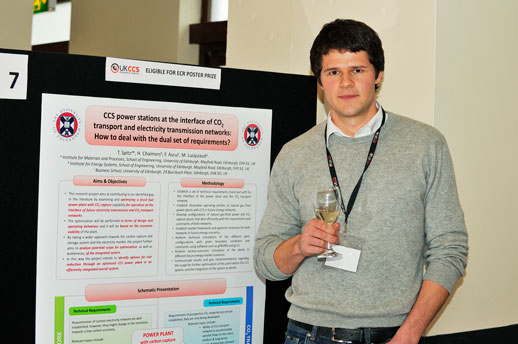 Optimisation of design and operation of fossil fuel power plant with CO2 capture capability was presented by Thomas Spitz and co-authors from the University of Edinburgh and pointed out that an efficiently integrated overall system will offer cost reductions through an efficiently optimised CCS power plant.

Ionic liquids are identified as next generation materials for a wide variety of engineering applications by Jason Hallet et al. from Imperial College. Separation of CO2 by ionic liquids is a relatively new area of CCS research. Hallet et al. presented “Process Performance of indexed design of ionic liquids for carbon capture” and pointed out that they offer significant reduction in the reboiler duty, the most talked about element of a post combustion carbon capture plant. Waheed Afzal from University of Aberdeen presented on a similar topic. According to him, phosphonium-based ionic liquids have exceptional physical properties for gas separation and may be used for CO2 capture from large point sources. Afzal identified four such liquids and pointed out that anion appears to have a larger influence on CO2 solubility as compared to cation. The poster presented by Dr. Afzal gives some fundamental properties such as density, viscosity, solubility and Henry’s constant of the phosphonium-based ionic liquids.

The use of activated carbon for CO2 capture is another interesting area of CCS research. Xin Liu and co-authors identified that novel bio-carbons derived from rice husk has a high capacity for CO2 capture. 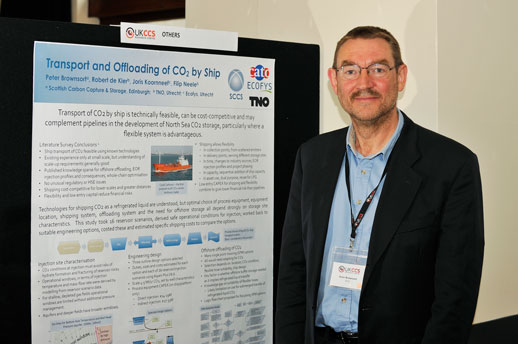 A multinational EU Horizon 2020 funded project, STEMM – CCS, aims at producing new tools and techniques for environmental monitoring and to deliver the first CCS demonstration project level implementation of an ecological baseline. Antoine Iogna presented “Offshore CCS with enhanced gas recovery” as an option to recover CCS costs. Clea Kolster of Grantham Institute for Climate Change and the Environment presented on safe storage of CO2 in the Bunter Sandstone of the Southern North Sea.

The session closed at 7:30 pm, followed by dinner at the Great Hall, Sackville Building, University of Manchester.