Reporting on The Carbon Conundrum at the British Science Festival

Written by Thomas Wild from University of Aberdeen who was one of the PhD student volunteers for The Carbon Conundrum event at the British Science Festival 2014 in Birmingham, organised by the UKCCSRC with SCCS and BGS and with support from Imperial College London and EPRG at University of Cambridge. 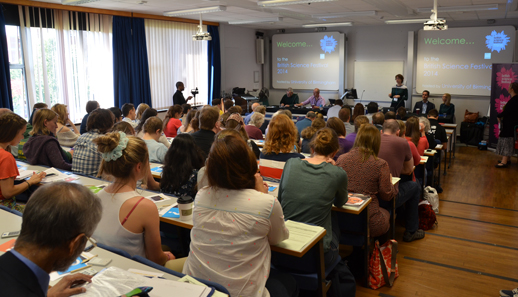 It is evident that people have a genuine concern about climate change and the issues of increasing carbon dioxide in our atmosphere. Aided by the nice weather and the general buzz around the University of Birmingham/British Science Festival, this concern saw over 70 people attend ‘The Carbon Conundrum’ on Sunday morning. 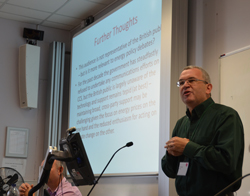 The session, chaired by Dr Claire Ainsworth, was kicked off by Dr David Reiner who highlighted some public perceptions of CCS with the aid of interactive voting devices. After the inevitable technical issues (it wasn’t plugged in) the audience voted on their level of support for government investment, on whether or not they would use nuclear, solar, and carbon capture and storage, and more generally if they were familiar with CCS, and fracking. This audience turned out to be more supportive and informed on CCS than the general UK public, which is hardly surprising seeing as they turned up to a talk on a Sunday morning! It was a great way to get people thinking about what they know…and more importantly perhaps, what they wanted to know.

Professor Myles Allen then set out to address one seemingly simple, but ultimately complicated point: Why CCS matters. He took us through the issues of CO2: where it all came from, what has it done so far and what will it do in the future. 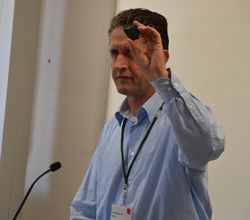 To highlight this he used lumps of coal as analogues for CO2 emissions, showing the audience what was there, what we had already used, and what, if used, would push us over the 2°C climate change that we need to avoid.

He also addressed a common question: “Why should Britain lead the way with CCS when we only produce 2% of global CO2“ This was answered in the form of this 60 second video which shows a time lapse of global CO2 output since 1750. Britain is the only producer for over 100 years, until about 1850 when European emissions started, followed by eastern USA and Japan in the 1900’s. He followed this up by stressing the point that we have no right to tell developing countries not to use their vast coal reserves after we, as a nation, reaped the benefits of this abundant resource ourselves for hundreds of years. He sees CCS as the only viable option to allow these countries to make full use of these resources (as they intend to do) 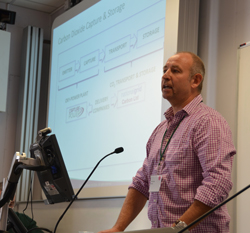 Calum Hughes, the Project Director for National Grid Carbon (who are delivering transport and storage) then spoke about the White Rose CCS Project in Yorkshire. He briefly outlined the oxy-combustion and other technologies that are involved in actually capturing CO2 from a coal fired power plant. He then showed the impressive plans for the CCS plant that would be attached to the existing Drax facility. I think one of the most important points made was of the phenomenal storage potential that the UK has in the North Sea, and East Irish Sea. This really highlighted the great position we are in, and, that if we act upon it, can become world leaders in terms of scale, and market leaders in terms of capture, transport and storage within Europe. 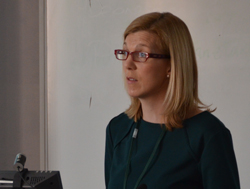 Denise Horan, in her role as lead communicator with Shell, gave an overview of the proposed CO2 project at the gas-based power plant in Peterhead. The fantastic location of Peterhead for all stages of CCS was highlighted, with much of the infrastructure for transport and storage being re-used from previous natural gas production. She also stressed the importance of community interaction as she mentioned that this was “their community, we are just guests”. I think public engagement is key if CCS is to be understood by the public, which will ultimately lead to greater acceptance. Events such as this one are crucial if we hope to keep driving this technology forwards. 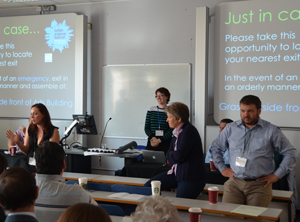 The fact that the subsequent Q & A panel ran over by nearly 15 minutes showed just how engaged the audience were, and is also a testament to the expertise of the expert panel who were joined by Dr Paul Fennell (Imperial College – Capture), Dr Julia Race (University of Strathclyde – Transport) and Michelle Bentham (BGS – Storage) who between them answered questions on the full chain CCS process.

Following this we all headed next door to the demo area where we had interactive displays and simple experiments set up for everyone to get involved with. This saw people shaking Coke bottles filled with CO2 and chemical solvents to simulate CO2 scrubbing, people blowing up balloons to get an idea of the transport system and a CO2 storage site fish tank where people could see the basic concept behind CCS storage. Even though they were simplified examples, they helped create a great atmosphere and explain the concepts behind CCS to the audience. It also gave people another opportunity to ask us about everything from “How long it would stay down there?” to “How can you get a liquid into a rock?” 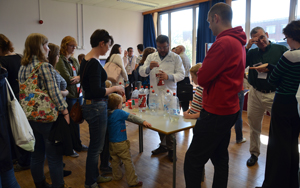 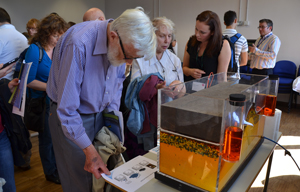 Overall this was a fantastic little event and one that I am convinced helped to spread knowledge of the science and application of CCS technology within the UK.

You can see more photos from the event in our Flickr album.