Reporting from the QICS Final Conference – May 2014

Home » Blog posts » Reporting from the QICS Final Conference – May 2014

Written by Dr Jen Roberts who is a ClimateXChange postdoc based at the University of Strathclyde.

In the shallow waters of a picturesque little bay located near Oban in Scotland lies the world’s first controlled CO₂ release in the marine environment. The exciting NERC-funded QICS1 project mimics the formation of a new CO₂ seep in the marine environment. Researchers aimed to explore the environmental and ecosystem impacts within the sediment and water column enabling; test shallow monitoring technologies against a measured baseline; and track the dispersion and fate of CO₂ in sediments and seawater.

Preparation and operation of the controlled release took two years. By some nifty design work, directional drilling from an onshore site allowed CO₂ to be released into sediments ~12 m below the seabed and under ~10m of seawater. The CO₂ release experiment at the site took place in 2012 when 4.2 tonnes of CO₂ was released over a 36 day period, monitoring continued into 2013, and the CCS community have been on (hypothetical) tenterhooks since, waiting to learn of what the QICS scientists observed….

…and the QICS Final Meeting held on the 8th May in London was our chance to find out! 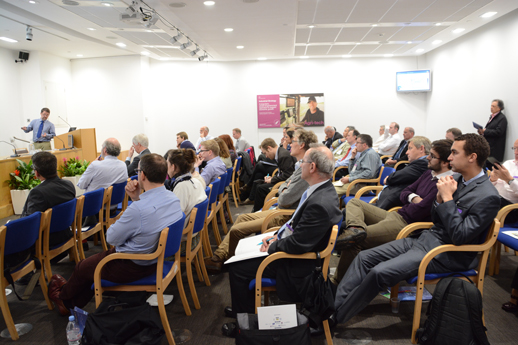 BUT – since much of the day was held under Chatham House Rules (pending peer-review publication of the QICs results) I can’t really give much away. I bet you wish you had come along to the meeting now. And the lunch was very good2.

I used part of my UKCCSRC travel bursary to attend3 and so promised to write a wee blog about the meeting – and so I will simply provide a little insight into the event and build your appetite for the research publication(s) which promise to be a scientific feast.

The event was attended by 35 delegates which were a mix of academic, industry, and policy folks. In the morning we heard brief summaries of the three research strands:

Jerry Blackford (Plymouth Marine Laboratory) then placed the CO₂ release and experimental procedure at QICS into the context of an up-scaled CCS site. He showed the fascinating effects of variables such as mixing and tides – which are specific to different seas and oceans – on CO₂ dispersion, based on modelling by Baixin Chen (Heriot Watt University) and colleagues.

The afternoon had two structured discussion sessions. The first was led by Ian Wright (National Oceanography Centre Southampton) who put the observations at QICS into context of monitoring at CCS sites (which will be further offshore and so deeper and the quantities of leaking CO₂ will likely be different) and the challenges this presents – or opportunities for sensor developers. In this session I learnt of an exciting recent ETI-funded project about MMV at CO₂ stores4 which will be approaching some of these challenges. 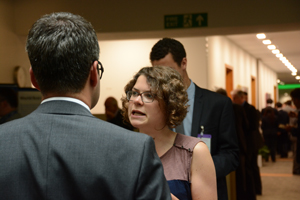 The second discussion sessions was about the challenges of establishing an appropriate baseline for CCS and led by Jerry Blackford. This led to a lively discussion about how the necessary data gathering could be directly or indirectly achieved, and opened up questions of responsibility and liability.

Jerry then closed these structured sessions with a brief summary followed by a nod to potential future prospects for the QICS approach, and the networking session that followed for the next hour or so allowed the discussions and conversations from the day to continue – fuelled by more tea and biscuits.

The day felt very relaxed, friendly and collaborative – which in part will be due to the skills of the meeting organizers5 (hats off to you all) and also to the fact that the CCS community is, indeed, a community. Thanks to other attendees for such open and spirited conversations.

1QICS is the project acronym for: ‘Quantifying and Monitoring Potential Ecosystem Impacts of Geological Carbon Stores’

2If you got chance to eat it. I got involved in too many interesting conversations, and since eating and talking requires a skill I have yet to master I ended up having to inhale mine.

3I popped along to meet some of the researchers and hear a summary of the experimental results. I was particularly interested because I did some research for the QICS project last year, and CO₂ leakage was the research focus of my PhD (and, in part, continues to be for my current post-doc).

5 I am assuming that this was the intention of the organisers. I can’t imagine that they wished to stir up a tight-lipped, tense and uncommunicative environment. If they did, they failed.