This blog was written by Usman Ali, Energy Technology and Innovation Initiative (ETII), Faculty of Engineering, University of Leeds, UK

The Gas CCS Meeting was held on 25 June, 2014 at Bramber House, University of Sussex, Brighton, and the agenda of the meeting was to present and get insight in the field of carbon capture and storage for the natural gas fired power systems. The meeting gives the overview of, what is happening at the United Kingdom, Mexico and China level in the field of the Gas CCS along with updates from the Gas CCS research projects. 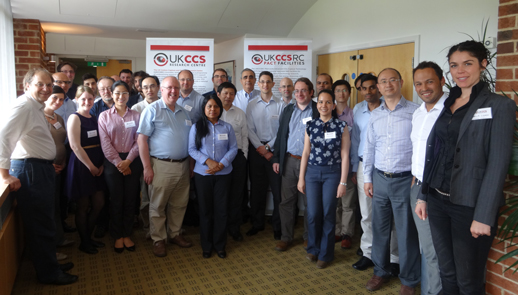 Tom Snow from SSE briefed participants on the proposed post-combustion power plant for the Peterhead power station. The project is to direct the flue gas to an amine based absorption train. The three key interfaces between the power station and the capture plant were presented and the probable engineering optioneering solutions were proposed.

Abigail Gonzalez Diaz from IIE gave a talk about Gas CCS in Mexico. Mexico wants to reduce GHG emissions and have recognised the potential of the Enhanced Oil Recovery and the shale gas opportunities by adopting the carbon capture and storage on fossil fuel power plants and in the oil industry. The share of electricity from natural gas there has increased from 17.1% in 2000 to 50.4% in 2011.

Enzo Mangano from University of Edinburgh presented the AMPGas project which is an ESPRC funded research consortium for developing the adsorption materials and processes for gas fired power plants. The research consortium is led by University of Edinburgh, University of St. Andrews, and Hriot-Watt University, along with large industrial support especially from Howden Group Ltd. The rotary wheel adsorber has been devised to determine the equilibrium and kinetic properties of the novel adsorbents tailored for the CO2 capture from the diluted streams.

Sai Gu from the Cranfield University gave a talk on the CFD modelling of the optimised reactor for CO2 absorption with the inclusion of the reactions and the flow control devices which results in the improved mixer design with enhanced heat transfer and reduced pressure drop for the optimal structural packing.

Hao Liu from University of Nottingham presented on the Solid Adsorbents Looping Technology (SALT) for the capture of the CO2 from the flue gas of the natural gas fired power plant and its appears to be the viable option for the post-combustion capture technology in comparison to the amine capture system. This project is led by University of Nottingham along with different industrial partners.

Richard Marsh from Cardiff University has examined the effect of the high oxygen concentrations in the swirl stabilised gas burners at different inlet operating conditions. The integration of the natural gas fired power plant to the capture system requires the exhaust gas recirculation or the oxy-fuel combustion process due to low CO2 composition at the outlet. The results from the swirl stabilised burner have predicted the CO2 as an efficient combustion moderator and the exhaust gas recirculation can be considered as a viable option and it should be further investigated.

Mohamed Pourkashanian, University of the Leeds gave an overview of the PACT facility. The Pilot scale Advanced Capture Technology (PACT) facility is jointly established and operated by different universities, including the universities of Leeds, Sheffield, Cranfield and Edinburgh. PACT has the overall capability to support industrial and academic RD&D activities and consultancy. The pictures of the recent visit of the Michael Fallon, the Minister of State for Energy and Business, and senior DECC officials, for its official opening were also shared.

Jon Gibbins from University of Edinburgh presented on the Gas-FACTS on behalf of Karen Finney. The Gas-FACTS work for the Future Advanced Capture Technology Systems and it is an ESPRC funded project. It is the consortium of the five universities including, Leeds, Cranfield, Edinburgh, Imperial, and Sheffield along with number of industrial partners. The project is concerned with the different gas turbine options including the flue gas recirculation, humid air injection with their integration to the amine capture plant along with the whole chain assessment. The presentation was an update from the different partners on each work package.