This blog was provided by Rebecca Cunningham, University of Manchester, whose attendance at the ECR Winter School 2015 was supported by the UKCCSRC.

Speaker Bio: Matthew Bilson is currently at the University of Sheffield as co-Programme Director of their new energy innovation team, on secondment from the Civil Service. Matthew was previously responsible at DECC for overseeing the Government’s £125m CCS R&D Programme, and liaising with its Research & Development partners (namely the Research Councils, the Technology Strategy Board and the Energy Technologies Institute). Matthew has spent over 10 years in the Civil Service, in a variety of roles working closely with industry, with particular interest in innovation, new technologies and manufacturing. 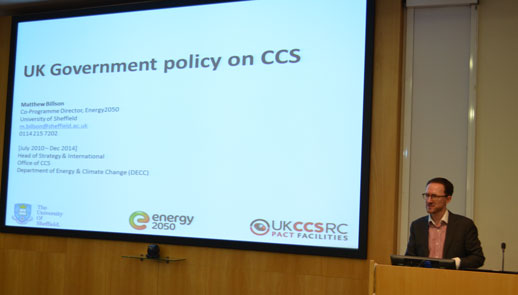 This presentation was a real highlight for me, as the focus was on the policy implications of CCS within a broader political landscape. As a newcomer not only to CCS but to the UK (having previously lived and worked in Australia), Matthew’s presentation really set the scene for what have been the previous norms and goals within the energy sector and how there is a shift toward energy reform.

Looking back on the political days of Thatcher, there was concerted effort to decentralise, moving to a “market based electricity system”. The decentralised nature of the energy sector in the UK means competition drives down prices; however, this means that the lowest common denominator is lower costs. And lower costs mean cheaper forms of energy such as coal and gas. These energy sources are low fiscal cost, however they are not low carbon cost.

In the late 20th/early 21st Century there is a necessary shift to move into a low carbon energy economy, and this will take quite a lot of work, both technically, politically and socially.

Why on earth are are the prices geared so negatively toward renewables?? (one may ask).

In the current political and energy market landscape, the biggest driver of higher renewable prices is RISK.

Who will then pay for these higher prices? (treasury? the taxpayer? industry?)

The answer is the consumer. The companies investing in the assets to build offshore wind / marine / CCS etc. will pay the higher price initially, and once built, the prices then will be passed onto the consumers.

These are the cold hard facts of both the cost of clean power and energy reform..

In 2012, the UK had a Roadmap for CCS which included CCS commercialisation, R&D, electricity market reform and international collaborations.

Two current projects in the UK which look set to go ahead are the White Rose (DRAX) and Peterhead CCS project demonstration plants. These two projects are Front End Engineering Design (FEED) projects as they are pilot plants (in a way, feasibility projects) that may then be scaled up.  If these projects are successful in all elements (technical, economic, social, environmental) it may well spur on further political will to continue the development and deployment of CCS in the UK, and in turn, assist in the transition from a low cost to low carbon economy.