Written by Tom Lynch, Claire Birnie and Lisa Roach, all Early Career Researchers at the University of Leeds, whose attendance at the meeting was made possible by the UKCCSRC’s ECR Meeting Fund 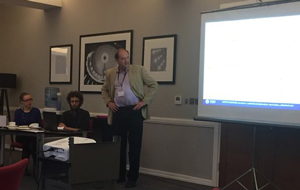 The keynote speaker was Jonny Rutqvist from the Lawrence Berkeley National Laboratory who shared his knowledge on fault reactivation, induced seismicity, and leakage during underground CO2 injection. Andrew Cavanagh of Statoil Research followed with a summary of his research on “The sensitivity of CO2 storage simulations to pressure artefacts: indications from the Sleipner benchmark model”.

Following the break, Anna Stork of the University of Bristol discussed passive seismic monitoring for CO2 storage sites while Giorgos Papageorgiou of University of Edinburgh/DiSECCS presented on the advances in rock physics modelling and improved estimation of CO2 saturation. Doug Angus of the University of Leeds addressed assessing uncertainty of time-lapse seismic response due to geo-mechanical deformation.

Quentin Fisher from the University of Leeds opened the first session of the afternoon with insights into coupled flow, geomechanical and geophysical modelling focusing on software tools and research gaps. Jim White of the BGS followed with a discussion on the monitoring, mapping and modelling of thin layers of injected CO2. Adriana Paluszny of Imperial College London/EPSRC CONTAIN project concluded with a summary of her work on numerical modelling of fracture growth and caprock integrity during CO2 injection. A strong theme coming across from the speakers was the need for continual comparison between modelling results and recorded data.

The final activity of the day was a networking and poster session during which Early Career Researchers (ECRs) were able to present their work and be evaluated for the chance of winning the poster competition.  Laurence Cowton, a PhD student from the University of Cambridge emerged the winner with his poster “How thick is a thin layer? Monitoring CO2 injection at the Sleipner Field”.

The ECR poster session was well received, however, the number of contributors was less than we anticipated, even with a £200.00 cash incentive. We concluded that a more targeted email to ECRs within UKCCSRC inscribed institutions may have boosted the participation. Several of the participants who were eligible for the competition were unaware of the prize until they attended the meeting. 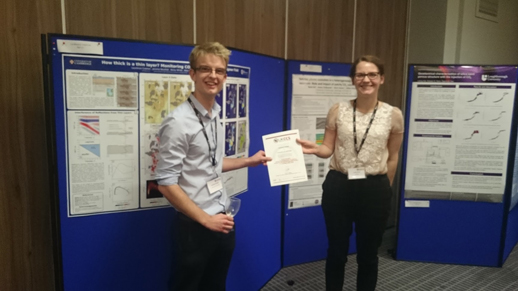 We are pleased to have opened pathways for communication and possible collaborations with international partners through Jonny from LBNL as well as bring a new international perspective on discussions of CO2 storage in the UK. Jonny’s attendance also widened the impact of the meeting through discussions and a departmental presentation at the University of Leeds during his stay.