Reflections from Canada and the USA

Home » Blog posts » Reflections from Canada and the USA

Paul Fennell is a UKCCSRC Deputy Director and Professor of Clean Energy at Imperial College London.

I promise that in no way was it a judgment on the UKCCSRC that my first act upon us getting the grant was to disappear on sabbatical for a year.  Sadly, this also meant that I missed the recent biannual.  Camille is doing a (much) better job than I would if I was there, and thanks very much to her for acting as local deputy director.  Please feel free to contact her with any complaints over the situation, or me at fakeemailaddress@sabbatical.com.

So – recent events for me… I was fortunate enough to attend Mission Innovation in Houston, which was held despite the hotel being under water a couple of weeks beforehand.  Unfortunately, some of us went to the gym rather than the bar, so weren’t around for the UK delegation photo (I promise I was in the building).  Jon has done a good job of explaining what happened, so I’ll restrict myself to a few short notes about my own personal experiences.

Street Fighter II don’t have nothing on the fight which the organisers of the meeting seem to have purposefully set up between the MOF and high temperature solid looping cycle disciples.  Half of our members were from one faction, half from the other.  To kick off the individual sessions, each person spoke passionately about their research, and why it was better than any other research (except possibly the research of people who worked in closely allied areas to their own, but didn’t do work that was quite as good as theirs).  Some managed to extend a 10 minute presentation for 45 minutes in this vein.  This lasted 8 am – 6 pm.  Then there was a reception.  After that we get back to it.  11 pm go to bar, then continue arguing for an hour, finally drafting two ppt slides.

Start at 8 am.  Continue to discuss why our research is best, but occasionally now conceding that there might be merit in the research of others.  Reflect on ppts written in bar last night just before midnight.  Decide that they aren’t actually all that bad, and get to the real work of trying to work out how to produce combined research priorities that actually make sense as a coherent entity.  Finish at a mere 7 pm.

The morning seemed to go quite well, most likely because I wasn’t there – I had to go and shout at the US healthcare system, my travel insurer and the US healthcare system again, before finally falling back on Mr Amex to guarantee my admission to see a doctor.  When I got back, everyone  (from both factions) was busily working together to transpose our thoughts from the previous day into reality.  Amazingly, we actually seemed to enjoy the work.

The chairs and rapporteurs have to stay and make something coherent out of our work.  They are beavering away and don’t need my input, regardless of how many times I helpfully offered it.  I have a swim, then disappear back to San Francisco.

At first I was sceptical of the whole thing, but having had the opportunity to listen in depth to a large number of people passionately advocating their research and eventually coming together to carefully consider what the real future of research in the field of solid adsorbents was, I was impressed that regardless of initial viewpoints everyone set their initial prejudices aside and worked for the common good.  Of course, the main finding was that Adsorbents are clearly the future – and that anyone who says otherwise is a heretic (particularly insert personal prejudice here).  Joking aside, I was also pretty pleased at the number of UK researchers (and government attendees) that there were, demonstrating the commitment of the UK to this important technology.

So, aside from a few days in Houston, what have I been doing?  Mainly not CCS for the first six weeks!  (I’ve been working at JBEI – the joint Bioenergy Institute in San Francisco).  This is an exemplar of the US way of doing things – pick an area, or areas and fund it heavily.  Get the national labs involved (have national labs).  The contrast with the UK way of doing things (consortia-based bids, based at universities) was clear.  Unfortunately…  the strength of a special purpose vehicle, bringing people in from a variety of locations, is also one of its weaknesses.  Universities can withstand governmental meddling* because of the strength of their base (specifically, the inclusion of teaching).  A large-scale lab, with no teaching, exists much more on the whims of the administration of the day; and if your administration believes in neither climate change (despite recently publishing a report that says it does) nor government spending, you may end up on a sticky wicket.

After spending a few days travelling up the coast, we finally eventually ended up in Vancouver – which is beautiful during the 10 % of the time it isn’t raining.  I’m visiting colleagues at University of Britich Columbia and I’m pleased to report that CCS in Canada is an continuing area of significant interest, both academically and practically.  I’m here working on High Temperature Solid Looping Cycles with Prof Naoko Ellis, and I’m pleased to see the number of students passionately interested in the field, with continuing funding and industrial interest. 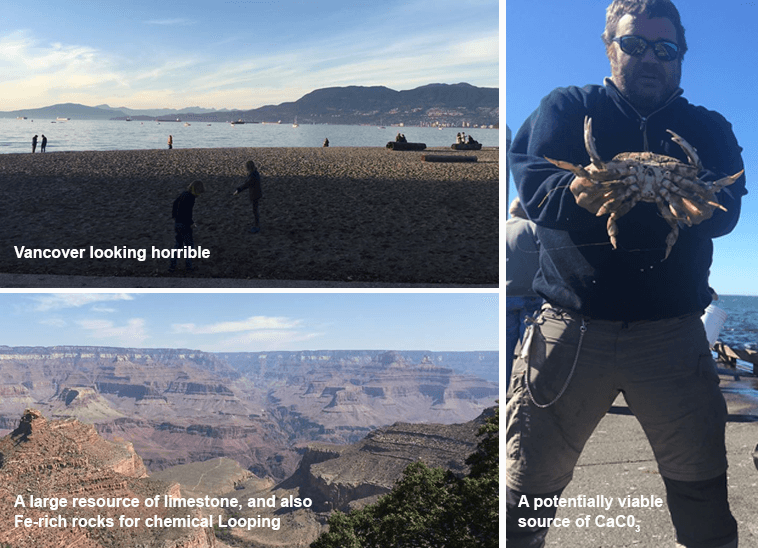 * Also, Brexit will cause significant issues for UK / EU science co-operation.  Anyone wishing to shop me can do so at university@dailymail.co.uk or please drop Chris Heaton-Harris an e-mail.