This blog was written by Toluleke Akinola who is a PhD student at the University of Hull and received funding to attend the Manchester Biannual Meeting from the UKCCSRC ECR Meeting Fund.

In light of the major changes from Government to funding for Carbon Capture and Storage projects, Celia Yeung, portfolio manager at the Engineering and Physical Science Research Council (EPSRC) as part of the Research Councils UK (RCUK), gave an update on the direction EPSRC will take with respect to CCS.

Celia began with an overview of the role of RCUK Energy Programme, highlighting that the programme was initiated to position the United Kingdom to meet its energy and environmental targets and it has been a major source of funding to UK Research Councils, including EPSRC, Innovate UK, BBSRC and many more. 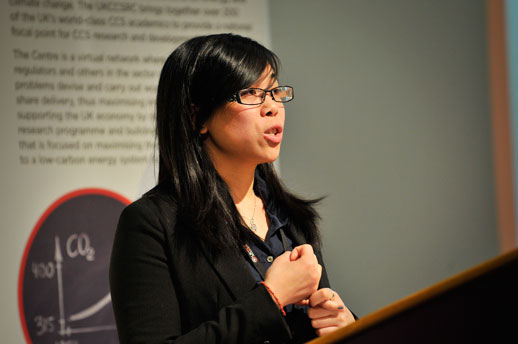 Celia then went on to focus on EPSRC, stating the areas of investment in CCS, which included the UK CCS Research Centre. She also mentioned a number of calls funded by EPSRC which included CCS for Natural Gas Power Stations, Challenges in Geological Storage for CCS, Challenges in Carbon Capture for CCS and Challenges in Industrial CCS, highlighting the research council commitment to commercialising CCS technology as it has a major role to play in reducing emissions of CO2 from fossil fuel energy sources.

The strategic vision, goals and direction of EPSRC were discussed, emphasizing that its major focus will be on balancing capability (formerly called ‘shaping capability’ and changed to capture the strategy aim). This is to align its portfolio to areas of UK strength and national importance as well as maintain the UK’s international research standing in the face of increasing competition, by taking a strategic approach. She then stated that there has been a call for evidence issued in April, executed at university level, and emphasised the evaluation criteria.

Celia also highlighted calls made public by NERC as well as ESRC.

I would like to thank the UKCCSRC for giving me the privilege of benefiting from the many experts present at this meeting.