This blog was co-authored by Eduardo Garcia, Louise Hamdy and Yongliang Yan.

The UKCCSRC Conference held on 16-17 April in Cardiff 2019, kicked off on a caffeine-fuelled Tuesday morning with ‘Post-combustion capture retrofit – A topical seminar’ on the post- combustion capture (PCC) of carbon dioxide (CO2). PCC is considered highly important for its short-term applicability in utilising fossil fuels without increasing the atmospheric CO2 concentration and for eventually allowing us to reduce the CO2 concentration in line with limiting the global average temperature increase to below 1.5 °C. It is also lauded as a practical solution to climate change due to its potential for retrofitting to existing power plants. Aqueous amine-based chemical absorption of CO2 is the industrial standard and is currently used for removal of CO2 from natural gas. Nevertheless, large volumes of flue gases entail technical and operational challenges depending on the precise gas composition. These must be overcome for cost effective and efficient carbon capture, and the challenges of separation, compression, transport and storage in old oil and gas fields, must also be fully addressed.

Jon Gibbins from UKCCSRC opened the seminar with a brief outline of PCC and introduced PACT: Pilot-Scale Advanced Capture Technology at The University of Sheffield – the UK’s official national testing facility for Carbon Capture and Storage (CCS) technology. He gave a round-up of what was discussed at the last PACT seminar, highlighting that PCC needs a higher commercial readiness index, but at the research level, progress is being made in opening access to practical studies which is vitally important for progression.

Next, Jørild Svalestuen from Gassnova gave an interesting background to CCS in Norway, which has a long experience of employing such techniques, utilising the Snøhvit and Sleipner storage sites in the North Sea.

Carl Clayton from DRAX Group PLC presented a fascinating case study of their bioenergy carbon capture and storage (BECCS) pilot in North Yorkshire, highlighting the efficiency and benefits in converting a coal-fired power station into a biomass station and retrofitting existing units for CCS. 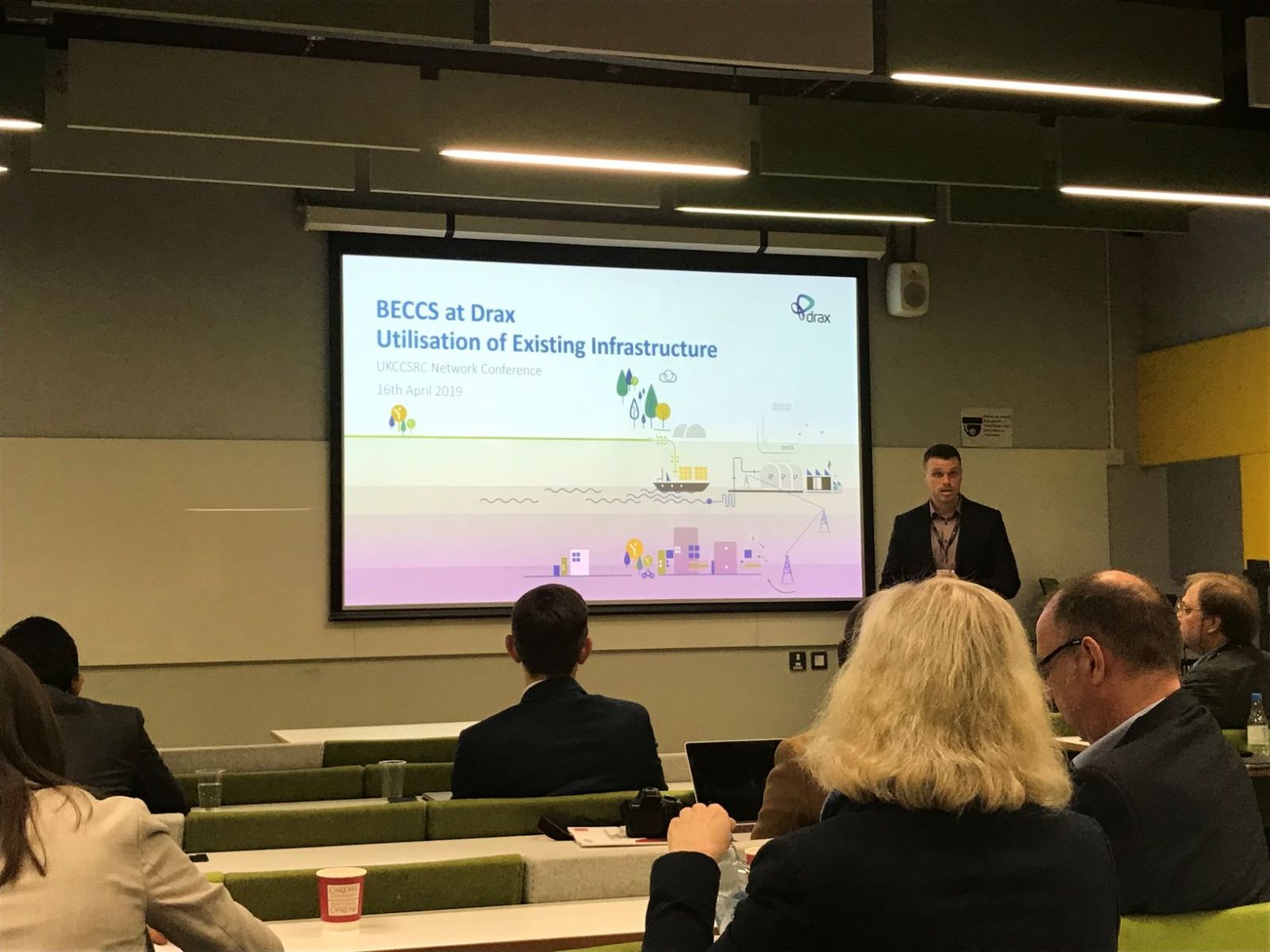 After some positive CCS examples, Robin Irons from UKCCSRC and the University of Nottingham presented a rather different story, giving an account of ROAD, a coal-fired power station with a capture and storage demonstration project based in Rotterdam. Although the technology was proven and ready to implement, ROAD was cancelled in 2017, one reason being the Dutch government’s intended phase out of coal-fired power plants. Robin described this ‘political zeitgeist’, assuming ROAD was therefore redundant, as an example of one of the major challenges to getting CCS started across Europe.

James Watt from Wood PLC next gave a very thought-provoking talk on the practicalities and challenges of retrofitting PCC technologies to existing power plants, a process which requires an assessment of the energy penalty and impact that the system can have on the surrounding environment. Older power plants have not been designed to be retrofitted with PCC therefore it is often an uneconomical option in comparison with new-build projects. Giving case studies on proposed projects in Longannet and Peterhead, James emphasised problematic issues such as the PCC stations being too compressed for space, located on unforgiving land such as sloping granite, having awkward orientation on costal sites or having their eventual supercritical carbon transport system in conflict with other busy major shipping routes.

Last but not least, researchers from the University of Edinburgh and University of Sheffield presented case studies of PCC retrofitting in China and South Africa. In China, the Haifeng Carbon Capture Test Platform has been established and some pilot-scale tests have been scaled up. In South Africa, there are also PCC projects underway, and the hybrid solar PCC system has been proposed to reduce the energy penalty entailed from PCC.

This seminar proved to be fascinating both technically, and in terms of bringing to light the real obstacles in the UK’s implementation of PCC technologies and gave all of the delegates,whether their background is in business, policy, industry or academia, a fuller picture of where we are in utilising this promising option in the fight against continuing climate change.

Prof Yong Yan, University of Kent, shares his report blog as an output from his project report for Monitoring of
Read More