Last August I (Paul Tait) spent a few weeks travelling back and forth between Edinburgh and Sheffield, to carry out a pilot-scale test campaign at the UKCCSRC’s Pilot-Scale Advanced CO2-Capture Technology (PACT) facility. Our research group at the University of Edinburgh, led by Dr Mathieu Lucquiaud and Dr Hannah Chalmers, tends to focus on issues of CO2 capture plant and full-system flexibility, so the opportunity for researchers to basically play around with a pilot plant for a few weeks is a huge bonus of having the PACT facility available to us. Although in comparison to some other recent UKCCSRC blogs, the location isn’t exactly glamorous!

We intended to implement various dynamic scenarios including realistic start-up and shut-down operations, capture bypass operations, and observe the effect on critical plant parameters. We also intended to test the latest versions of an online solvent sensing device which can provide values of solvent composition in real-time, designed by my colleague Bill Buschle.

The test campaign initially went off without too many hitches – but as always with experimental work there were challenges to be overcome! We weren’t able to install the lean online solvent sensor in the location we initially wanted to, so it was siphoning off solvent which was much too hot. Luckily we managed to source and install a second chiller, and following a rapid off-the-cuff recalibration of the sensor by Bill we were back on track. Until, that is, we realised several days into testing that an error with the stripper’s pressure control valve meant we had been operating it at atmospheric pressure. This meant that we had been wasting large amounts of energy as sensible heat in the stripper, essentially boiling and condensing water again and again, so our first three days of data weren’t representative of real plant operation. Argh!

Disappointed but undeterred at having essentially lost three days of data, we were back at PACT early the following Monday for the final two weeks of testing. Managing to implement complicated dynamic operations with only 2-3 people on plant was challenging, but there were no more critical failures. I should also add that I can’t thank the operators of the PACT facility enough, particularly Kris Milkowski who often stayed until 7pm at night running experiments with me, before driving all the way back to York.

By the final day of testing we had completed all the dynamic scenarios we had initially planned, so we decided to attempt something a bit different – instead of using the online solvent sensors to simply monitor the plant, we would try to actively control CO2 capture rate following a reboiler shutdown event using the online lean loading sensor. The idea was to switch off the flow of steam to the reboiler, allow the capture rate to decrease, then reintroduce reboiler steam at such a time that a minimum CO2 capture rate of 30% (chosen arbitrarily) was achieved.

Well, how did it go? Let’s take a look at the plant trends… 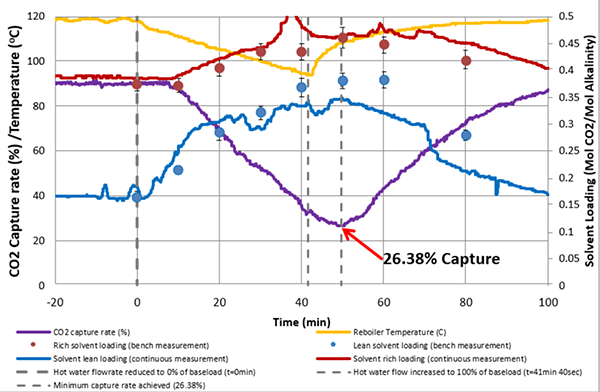 For a target minimum of 30% capture, we overshot it by about 4% (The sensor misbehaved a bit so we took too long to switch the reboiler back on). Not perfect, but not too bad considering it was based on an idea Bill and I came up and implemented in the space of about 3 hours! Continuous solvent composition measurements are likely to be an important variable in future plant control systems, and as far as we know this is the first time anyone has attempted this sort of thing in practice.

So despite a shaky start we ended up obtaining seven full sets of plant data for dynamic operating scenarios on coal plant, and a bonus “control” scenario too. The results are (hopefully) due to be published in the International Journal of Greenhouse Gas Control, and we’re currently discussing using the data to validate dynamic models with researchers from Imperial College. So keep your eyes peeled for those!