Dr Richard Porter and Dr Ryan (Feng) Wang, both from the Department of Chemical Engineering, University College London, provide an overview of their CCS research project, Optimising methanol production from steel manufacture off gases, funded as part of the UKCCSRC Flexible Funding 2018 programme.

Iron and steel production, with a global output of 1.8 Gt in 2018, is the biggest industrial CO2 emitter. Despite enormous strides in efficiency improvements to reduce the CO2­ emissions intensity on some steelworks to as low as 1.7 tonnes of CO2 per tonne of steel, the global average was still 2.6 tonnes of CO2 per tonne of steel in 2016, with large volume steel production emitting up to 4 tonnes of CO2 per tonne of steel in some countries. Carbon capture, utilisation and storage (CCUS) offers the opportunity to substantially reduce the CO2 footprint of steelworks, which accounts for between 7 and 9% of direct emissions from the global use of fossil fuel. A variety of CO and CO2 containing off-gases are present on an integrated steelworks which are usually primarily used to generate heat and power; of these, Blast Furnace Gas (BFG) presents the largest volumetric flow and is hence a prime target for decarbonisation. There is currently huge interest in developing schemes that combine CO2 capture with conversion of the steelworks off-gases into valuable chemical products.

Global methanol production was around 85 million tonnes in 2016. Methanol is currently primarily sourced from fossil fuel; mostly from natural gas, except in China where it is mainly produced from coal at up to 67 % and from coke oven gas at around 17 %. Global demand for methanol is forecast to increase as the world shifts away from fossil fuel consumption. Methanol production presents an opportunity for CO2 utilisation on a steelworks where there is sufficient market demand given the diverse range of its applications. A number of challenges remain for developing such schemes though, which include the development of catalysts suited to a non-conventional environment and the design and optimisation of chemical process plant along with the calculation of key performance and techno-economic indicators.

To address the above challenges, we have conducted a systematic experimental campaign along with process simulations to investigate the catalytic reaction kinetics and process economics for optimising methanol production from BFG.

Part of the experimental program has focused on Identical Location (IL) imaging of copper–based methanol synthesis catalysts which have been exposed to relevant conditions where carbon monoxide or carbon dioxide undergo reaction with hydrogen to produce methanol. The IL technique is a non-destructive version of scanning electron microscopy and has been proven as a concept across different time and length scales. The IL technique uncovered the formation of a thin layer around reaction exposed Cu particles had formed as illustrate in figure 1. These layers are believed to be made of zinc oxide and are responsible for the catalyst’s activation in methanol formation reactions. Copper and copper oxide containing nanoparticles were also identified in the catalysts. The copper nanoparticles are spherical with 5 nm diameter, whereas copper oxide nanoparticles have irregular shapes and are slightly bigger. We aim to examine the oxidation states in the catalyst in the near future by using an X-ray nanoprobe. 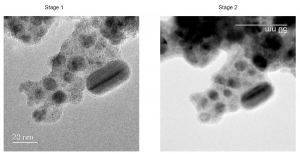 Figure 1. Identical Location images showing the formation of a thin layer of ZnO around Cu nanoparticles

Investigations were also carried out in a micro-activity reactor for real-time, in-process activity and selectivity measurements of catalysts for methanol production. Two different types of catalyst have been tested; 1) Copper particles supported on Cerium oxide, which were synthesized at UCL’s labs, and, 2) commercial copper-based catalyst. By monitoring the reaction products by using mass spectrometry we were able to identify and measure of different gases (i.e. methanol, methane, formic acid, formaldehyde, ethanol and CO). These results taken over ranges of temperatures and compositions allowed the construction of the Arrhenius rate law diagrams. These investigations highlighted that the copper supported on cerium catalysts have high selectivity towards carbon monoxide and methane formation during CO2 hydrogenation reaction.

Scaling up from the reaction kinetics, we have performed the conceptual design of BFG-to-methanol process for integration at a steelworks, based on the BFG flow, which ordinarily destined for a combined heat and power plant, being diverted for CCUS. This resulted in the process flow diagram shown in figure 2, based on conditioning the BFG using a number of unit operations, followed by methanol synthesis using the direct CO2 hydrogenation route. The process simulated using the software Aspen Plus, allowed for the complex calculation of the mass and energy balances along with evaluation of the process economics. On the design basis, the results have shown that diverting around 25% of CO2 in the process for utilisation would result in a production of ~200,000 tonnes/yr of high purity methanol, which is equivalent to typical commercial scales. Energy balance and cost analysis demonstrated that the compression of BFG and CO2-syngas are the most energy consuming and costly steps. CCUS processes will play an important role in CO2 mitigation by capturing and storing CO2 and using it to make chemical products, thereby displacing the fossil fuels that would have otherwise been used to make them. 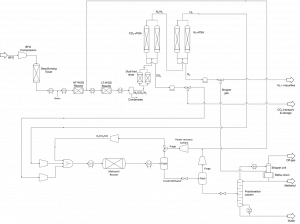 Find out more about this project and view further outputs here.