The first day of the biannual meeting held at the Technology and Innovation Center, University of Strathclyde, was very exciting; graced with sunny weather which made delegates from around the globe relaxed. Several posters showcasing new researches on CCS were displayed, and as expected the lunch time provided avenues for networking. The session began with welcome remarks from Professor Jon Gibbins, the director of UKCCSRC. His presentation covered majorly new projects in the UK with information on the capture technologies to be deployed, and storage sites to be used, with a view on planning for CCS cost reduction. Then Professor Dimitris Drikakis, the Dean of Faculty of Engineering, University of Strathclyde, extended the warm reception to all attendees and to the entire delegation to the University of Strathclyde.

Dr Phil Hare from Pöyry Management Consulting gave the opening keynote by presenting work done for the committee on climate change investigating mechanisms that would secure cost reductions. The talk was titled ‘’Seeing is Believing’’. He emphasized that the prediction of costs of generation in the future is not handled alone by CCS and that the wind sector has a major role to play too. Also, recent reports by Energy Technology Institute (ETI) and Committee on Climate Change (CCC) have shown significant contributions to costs of a wider deployment of CCS in the UK. Engagement of policy makers can help tackle challenges facing the CCS industry, given policies can create the conditions for cost reduction but cannot assure it.

While the keynotes focussed on expectations of cost reductions on CCS associated with delivery, setting targets ranges for CCS was emphasized. 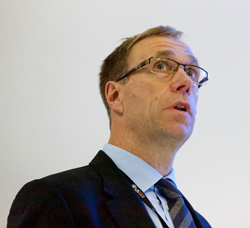 His emphasis was on developing projects that show the advantages of CCS in reality. Charts were presented to show historically the massive cost reductions and expectations by 2028. Different cost reduction scenarios were addressed and the possibilities of making these scenarios practical analysed. It was then finalized that the pressure of cost is increasing and been able to make these ideas practical was a main target.

Several conclusions were made; Developments in the UK are essential if UK costs are to fall, and a modest and stable UK market is essential for cost reduction. Cost reductions accrue from the combination of developments specific to the UK and the efforts of other countries active in these sectors. The UK is not ‘going it alone’ but instead should be seen as one of a number of countries leading the efforts to develop options to address climate change.

Cost reduction and commercialisation for both offshore wind and CCS will only be possible, if an industry emerges based upon enough market opportunity to create a ‘critical mass’ for developers, the supply chain, installers and the investment community. Analysis showed that in broad brushed terms, the UK this is likely to require 1 – 2 GW per year for offshore wind and 4 – 7 GW in total by 2030 for CCS.