The UKCCSRC Biannual meeting programme has frequently included one or two Parallel Discussion Sessions. This time around in Edinburgh was no exception. This session brought together the actors and stakeholders involved in the part of the chain that takes CO2 from a coastline, to storage deep below the seabed that remains secure, under the very broad banner of “Offshore storage: How ready is ready?” The session was chaired by Michelle Bentham, Head of Partnerships and Innovation at the British Geological Survey and a familiar figure in secure CO2 storage, well known in particular for strong knowledge of key sites below the North Sea. 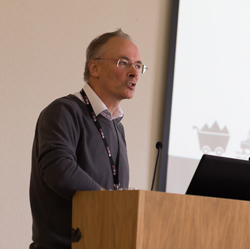 The session kicked-off with a presentation from Alan James of Pale Blue Dot Energy. The talk gave an overview of, and then gave some meaty technical specifics on the recent ETI Strategic UK CO2 Storage Appraisal Project 2015/16. The project in question was led by Pale Blue Dot Energy together with Axis Well Technology and Costain, and has generated much recent interest in the community. After outlining the state of the art in catalogued offshore UK storage options prior to the present project, and the massive prior information legacy for the UK, and indeed for most North Sea countries, Alan talked the break-out session through the objectives and workflows for the 2015/16 project; in essence to de-risk stores of likely commercial interest and furnish robust cost estimates to inform a roll out strategy.  For this, five separate type examples of UK offshore were selected as a portfolio approach. Many in the room had familiarity with portions of the North Sea or equivalents, and the selection of technical details was well received, and a few explainers were fielded by Alan mid-talk, adding to the note of the informal setting of the break-out.

What prompted the most interest in Alan’s talk was the costing results delivered by the project. Several questions arose on the total life-cycle costs and the spread for each between Cap- & Op-ex as well as MMV and Abandonment costs. Even more so for the costs information  juxtaposed against levelised unit cost per stored ton (transport & strorage split). it was noted that Goldeneye (using UK FEED Study KT deliverables) really jumped out with the lowest costs in the former but over double the average in the latter. This was taken as compelling evidence that it is (or would have been?) a true demonstration opportunity (no shared use of new pipe infrastructure, multi-store sharing or other mutual site cost reductions were considered – the objective being to inform on projects that could start now). In the final total cost analyses, some were surprised to see the relatively low impact that cheaper or dearer MMV might have on an offshore project. It was noted that there is no way to metric the social acceptance of, and public reassurance in a project that MMV might add make or break value to.  The major (short term ?) project risk of storage efficiency and options to mitigate where this is overestimated was raised; the next talk had impressive examples of operational experience on this very topic… 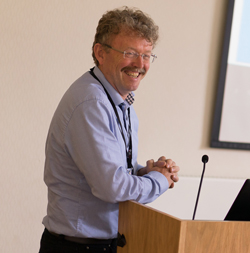 The second talk was given by Philip Ringrose of Statoil ASA & NTNU, Norway who nicely summed up the suspicion, or for some, clear understanding, that the UK really needs operational experience from existing projects (e.g. Norway) and oil/gas operators to define cost-effective and optimise future (offshore) storage plans. Philip opened on a very positive note, firstly noting (to a ripple of applause) that the date of the presentation was 20 years to the day since the Sleipner project began, and noting that Norway retains good relations with UK on many levels and reminded all that Norway has is much CCS learning from real projects that the UK could benefit from. The next big news was Philip noting the encouraging signs for a positive FID (subsequently confirmed) on an industrial CCS project. Of interest here was the initial consideration of shipping and the almost unavoidable economic need to work with experienced oil/gas operators.

The talk then moved into fascinating technical detail and modelling on how additional project costs with storage capacity issues could be minimised using comprehensive back up solutions (e.g. well intervention at Snøhvit to a deeper injection horizon to alleviate early well-bore related pressure rises) and robust monitoring for (1) early warning of any necessity for a fallback to plan B and (2) a quantitative evaluation of plume progress (e.g. where pressure gradient driven versus gravity-capilliary effects govern migration). This final topic generated lively, broad discussion that linked back to the first talk on the best or most likely scenarios for early projects in the UK. There was a sense that Goldeneye should be somehow ressurected. Others noted the attraction for Hamilton for a ripe, industrial source project. At this point the conversation returned to the just launched Oxburgh Report and the need for a state-initiated company to deliver transport and storage – a theme recurrent throughout the Edinburgh Biannual….. 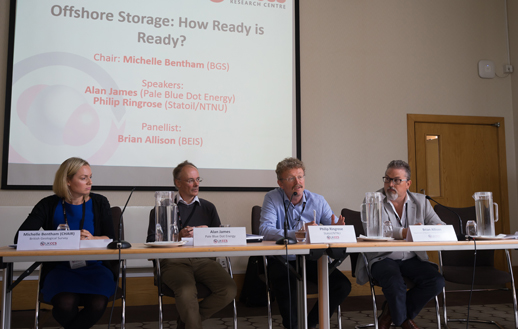