This blog was written by Peng Xie, a PhD student at the University of Sheffield, who received funding from the ECR Meeting Fund to attend the UKCCSRC Autumn 2016 Biannual Meeting in Edinburgh, 14-15 September. 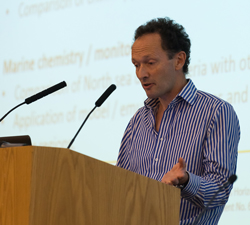 Check out the blogs about the new EU projects and the new EPSRC projects that also presented in the same session.

There were two speakers to present the new CCS projects funded by NERC (Natural Environmental Research Council). The first project was Characterisation of major overburden leakage pathways above sub-seafloor CO2 storage reservoirs in the North Sea (CHIMNEY) which was about investigating the risks of leaks from CO2 storage reservoirs situated under the seabed. Professor Jonathan Bull, the PI of this project, from University of Southampton gave a detailed introduction about the project. First of all, he introduced the participant organisations of this project which are University of Southampton, the National Oceanography Centre (NOC) and the University of Edinburgh. Three two-year PDRAs and experiments expenses are funded from May 2016 to April 2020. They plan to undertake a major fieldwork programme in 2017 to explore the chimney-like structures in the sub-seafloor of North Sea. These structures were considered to be possible pathways for the transfer of fluids and gases to the seafloor. A better techniques to locate these sub-seafloor structures and determine the permeability of the pathways were expected to be developed from this project. The project also works closely with CGG, Applied Acoustics, GEOMAR, and the Lawrence Berkeley National Laboratory. 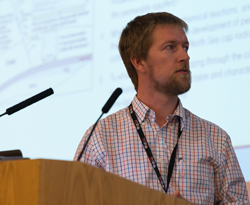 The second project was Migration of CO2 through North Sea Geological Carbon Storage Sites: Impact of Faults, Geological Heterogeneities and Dissolution The project PI, Dr Jerome Neufeld, from University of Cambridge gave a presentation to introduce this project. He briefly introduced the NERC funded consortia between Cambridge University, Imperial College, the University of Strathclyde and the British Geological Survey. Expertise from a range of disciplines was being brought together to understand the impact of heterogeneities on the safety of storage in North Sea geological carbon storage sites. The approach is to geologically characterise the relevant geological heterogeneity within the overburden, and to map the structure and propensity for fluid flow within faults in that locality. Geochemical analysis of the fluids will allow the scientists to measure in situ dissolution and precipitation rates in the core flooding experiments. They would develop tools needed to geologically characterise the North Sea overburden, provide quantitative estimates of trapping rates in geologically complex overburden and fault complexes, and demonstrate the ability to seismically resolve fluid flow pathways. This project would greatly expand the potential for geological CO2 storage by quantifying the potential risks associated with leakage in more geologically complex storage sites.