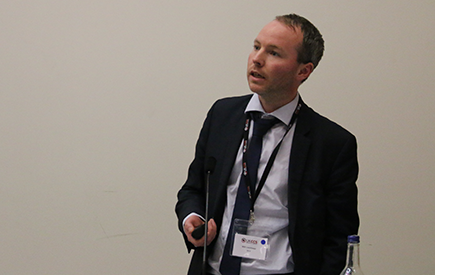 After the coffee break – as always very informative and highly interesting! – Will Lochhead set out to give an update on the UK Government’s current standpoint on CCS. Although head of the CCS policy team within BEIS (UK Department for Business, Energy & Industrial Strategy), Will made clear right in the beginning that a clear pathway on how to move forward with CCS has not been determined, and will be communicated at some point later this year. Instead he invited the audience to ask about the cancellation of the most recent CCS competition, stressing that mistakes that had been made must not be repeated. What Will was able to tell regarding future CCS strategy, was that the important role of CCS to reach UK climate targets is still being recognised by the Government. As the elephant in the room, this reassured the researchers greatly.

Diving into his slides, Will started speaking about key areas the UK Government is currently examining as it deems them necessary for decarbonisation. These areas include: decarbonisation of industry, sources of clean and flexible power, hydrogen production for the decarbonisation of the heating and transport sector, and the development of new markets and products that utilise carbon dioxide and can act as a driver for decarbonisation.  Will continued to speak about key CCS projects that the Government is still supporting (e.g: Teeside collective), and reports it has commissioned on CCS (e.g.: Lord Oxburgh report, ETI report, etc.) that all have two common messages: ‘CCS is vital’ & ‘a realistic and viable CCS strategy needs to be determined as soon as possible’. Regarding the second message Will referred again to that BEIS is currently working on the strategy and will communicate it within this year.

The deliberately short talk left plenty of time for questions. Once again a discussion evolved around the cost figure of 85£/MWh that, according to Lord Oxburgh’s report, CCS needs to reach in order to be considered fully cost competitive with other low carbon technologies. Speakers in the audience felt that this target fails to consider to comparatively distinct task of CCS plants in the power system that contributes more value to the system compared to the other competitive low carbon technologies by providing firm and flexible power. A statement was made by a speaker in the audience, that it is unfair to expect CCS to achieve such a low cost figure for a first of a kind project, when other low carbon technologies have been subsidised substantially over many years which in the first place enabled them to achieve the considerable cost reductions they are benefitting from today. This unequal treatment of technologies is further amplified by asking CCS first of a kind projects to be cost competitive, when these demonstration projects are often relatively small compared to full scale projects that could follow and would benefit considerably more from scaling effects that can drive down its cost.

Basically Will agreed to these points without much discussion. This left the audience hopeful that these points will be considered by BEIS, eventually leading to a fair and unbiased evaluation of low-carbon technologies that will inform and influence the governments’ energy market strategy over the coming years and decades.