London Spring 2017 Biannual: We must be able to answer the question: WHY CCS??

Home » Blog posts » London Spring 2017 Biannual: We must be able to answer the question: WHY CCS?? 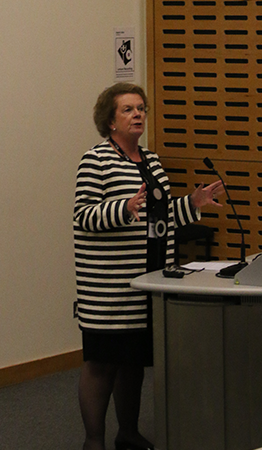 I am Nelia Jurado, a Post-doctoral Research Fellow at Cranfield University. I was awarded with some travel funding to attend to the Biannual UKCCSRC Meeting held at Imperial College London. I was assigned to report on the opening session, which I personally found very enlightening, for the tips that Baroness Liddell of Coatdyke gave about how to approach the difficult context that the development of CCS technologies is facing in UK and worldwide.

Martin Blunt started the session on Tuesday welcoming all the attendants and thanking for the tours done during that morning around the experimental lab facilities at Imperial College. He introduced Jon Gibbins, Centre Director of UKCCSRC. Jon gave an update about the new centre, which has received £6.2 million funding, from which 50% will go to the Coal Research Program (cross-cutting, capture, BECCS, build-up new pilot research facilities, etc.). He reported that another part from the funding is expected to be used for flexible research (i.e. relatively quick/small projects or collaborative activities within existing projects). He explained also that there is going to be a new group called the Scientific Council, which will be formed by the PI’s of previous CCS UK-funded projects. Jon emphasized that there is still a lot to do on CCS, and that we need to put more effort in the next decade to get to the place we need to be in the future. Jon introduced Baroness Liddell of Coatdyke, Honorary President of CCSA.

The Baroness started her speech reminding the audience that this is a critical time and there is a multiplicity of challenges in the CCS context (i.e. the election of a climate change denier in the USA, Brexit). However, she highlighted also that wherever there is a challenge, there is an opportunity, such as the new funding program mentioned previously by Jon Gibbins. The Baroness commented on the Oxburgh Report that gives a very realistic context that has allowed a re-engagement in the debate about CCS; which is vital to get CCS to a new level. She stressed how important is for the way forward in CCS that the projects have credibility, relevance and cost effectiveness, because if they don’t have these factors, then they will lose competitiveness. It was also emphasized that we need to keep the sense of urgency to be ready for what is necessary to get done by 2030-2040’s, and for that, we ought to have something on CCS by mid 2020’s. The Baroness raised the question about how we can convince people that we can do CCS. She suggested that we need a much stronger Government – industry cooperation that prepares the scenario to build CCS plants. She also reminded that to succeed with CCS, the projects have to be built on the base of a business model (especially transport and storage). And she underlined that the people who make the decisions have to understand the issue, and for that the academics have to communicate in a way that the decision-makers understand. The Baroness recommended not to tell the ministers in a presentation when a discovery has been made; but that it is better to take them in the journey of making that discovery. Finally the Baroness finished her talk giving a few tips that can help to move CCS forward, such as build engagement with stakeholders, give simple messages (keep it clear, for the message to be easily reproducible), and the most important: to be able to answer the question WHY CCS?