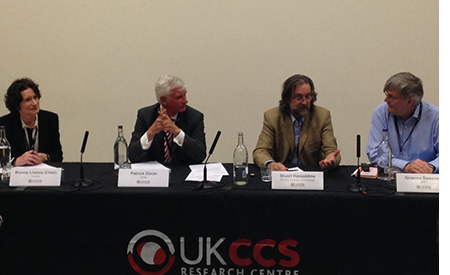 Chaired by Dr Bryony Livesey from Costain, the final session on day one focussed on the Oxburgh Report, concerning the role of CCS in the UK.  The report states that CCS will be an essential component in delivering the lowest cost of UK decarbonisation, with full-chain CCS costing in the region of £85/MWh, under the right circumstances.  Prof Stuart Haszeldine, Patrick Dixon and Dr Graeme Sweeney all took to the stage to consider how the UK can get to the point where CCS costs could be reduced to this level.

First up was Prof Haszeldine (University of Edinburgh/SCCS), who presented “simply the most convincing argument you ever heard” . . . his own words!  He highlighted that the same mistakes were made in the most recent government competition for CCS; furthermore, it was cancelled with no notice, based on no evidence and with no thought to its impacts.  Whilst it is apparent that the UK needs to rapidly develop a CCS infrastructure, the government have clearly shown we have a ‘buy, not build’ philosophy – i.e. not progressing our own technologies but simply buying in from elsewhere.  Linking his talk to that of the Baroness’s earlier, he stated that CCS needs to be developed in a normal way – not as a special case.  CCS in power and industry is already operating in other countries at prices lower than those cited in the UK, and furthermore, estimations from several leading organisations state prices of less than £90/MWh is achievable.  The Oxburgh report had 6 key points – to conclude, Prof Haszeldine has come up with his own different set of 6 recommendations.  The first three aim to reduce costs and assure profit: establish a CCS delivery company; establish a regulated return economic system for CCS; and for industry, provide industrial capture contracts.  The fourth widens its applications – establishing a heat transformation group (based on H2).  The final two deal with creating a storage market: establishing a CCS certificate of storage and establishing a CCS obligation system.  Having an integrated working system is vital – just being cheap is not enough.  Also, we don’t just have to focus on power generation; any guaranteed CO2 source will do!  There is existing infrastructure in the UK, and we can add capacity to integrate more sources to make it as cost-effective as possible.

Mr Dixon (CCSA) presented a figure of £92/MWh as a reasonable cost for the first conceptual project in the UK, as £85/MWh was just a ballpark figure – but below £100/MWh is achievable, for CCS in both the power and industrial sectors.  The analysis by the CCSA shows that costs are dependent on the gas price – this changes the CfD, which appears to be highly sensitive.  Risks need to be minimised and it is therefore important that the government underpin transport and storage projects (T&S Co), and also potentially the capture companies (Power Co). Risk allocation is highly important.

Lastly before the discussion, Dr Sweeney (ZEP) also highlighted the need for de-risking investments.  This needs to be done primarily by the government, especially on the bits that no one else will de-risk.  Market mechanisms are also needed, such as clear carbon pricing.  Funding is also important – we need to lead from the bottom up.  He also drew attention to not only decarbonising power, but that industrial processes, transport and heat are also important.  There need to be a number of common interest projects across Europe; these cooperative projects will need to cross many national boundaries as well as the different sectors mentioned above.  High levels of CO2 reduction are important and we can’t do it – in the UK or in Europe – without CCS.

Opening up for the panel discussion, questions and comments from the floor were contributed by Dr Clair Gough (University of Manchester), Dr David Reiner (University of Cambridge), Philip Sharman (Evenlode Associates Ltd) and Simon Bittlestone (National Audit Office), among others.  The non-trivial role of BECCS was discussed.  Chatham vs. IEA was also considered.  A detailed comparison of Norwegian and UK progress with CCS outlined that Norway has stepped up, whilst the UK has backed away; they are currently doing the job the UK could have done – moving forward to lead the way with CCS research and projects.  Although power with CCS might cost more, the benefits need to be highlighted.  Furthermore, we cannot do CCS on electricity alone – it will be competing with ‘sweet deals’ for nuclear and subsidies for renewables, like wind.  With the cancellation of the UK CCS commercialisation programme, are we simply fighting yesterday’s battles? The same choice will still need to be made again in the future.  Economies of scale are important to meet £85/MWh – only a relatively small investment will be needed for a small CCS project; however big money will be needed for larger projects, but at a much lower unit cost and with bigger impacts.

The main conclusions from the session, as highlighted in the wrap up by Dr Livesey, is that we need to focus on and present our key messages to make a good case for CCS.  We need to craft the narrative that gets us the outcome – CCS at a price that is competitive with other forms of clean electricity, at around £85/MWh, not the £170/MWh claimed by the government to cancel the CCS competition in 2015.