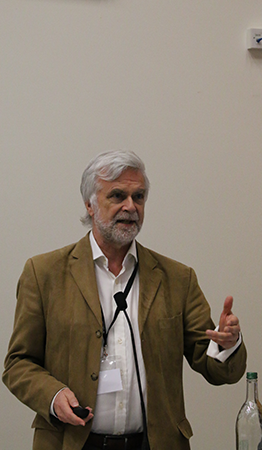 The Spring Biannual ended with a talk delivered by Professor Jim Skea and paraphrasing his words; there seems to be a cognitive dissonance between where we would like to be (in terms of climate change) by the end of the century and what we are prepared to do on ground to achieve this. This certainly seemed to be in line with the key debated topics of the Biannual.

Jim Skea started off by highlighting the importance of the Paris Agreement and reiterated the importance of the pledges taken by individual nations and their contribution towards emissions reductions. At the current state, countries like China are projected to go well above threshold limits for carbon emissions by 2030. So what needs to be done to adhere to the Paris agreement?  Scientists have projected several scenarios/ roadmaps to achieve global targets of emissions mitigation and all of them clearly identify CCS as a critical technique. In particular, CCS needs to be deployed and running at full scale as soon as possible for even a chance at limiting global temperature’s to well below 1.5 ᵒC.  Moreover, least cost models demonstrate that carbon shadow prices would increase by 50 times its current value by 2100. We also learnt that the motif behind most scenarios modelled by scientists, emphasise the key role negative emission technologies could play in the latter half of the 21st century. BECCS, DAC, enhanced weathering and afforestation & reforestation were the key negative emission technologies discussed. However, the audience was informed that the CCC advises the pushback of such technologies till the latter part of the 21st century, owing to the political concerns regarding land and water use. The IPCC will address these impacts of climate change and emission reduction techniques including BECCS on land in a special report in the near future.

So amongst all these issues what does this mean for the future of CCS in the UK, in particular? Jim Skea ended on the CCC’s outlook for UK; for the time being, there is a need to strategically focus on developing the existing techniques to reduce emissions and form CCS clusters that involve both the industry and power sector. Unfortunately, there exists no policy for the deployment of CCS in power sector and no allocation of risk balance between the public and private sector for CCS to be mainstreamed. These issues have existed and to this day, remain the key obstacles the for CCS in the UK.

This seemed like quite bitter for us eager early career researchers, and certainly grounded our expectations for CCS in the near future in general. However, the main positive takeaway from the end of this Biannual for us researchers is that no matter the political or social argument against CCS, the science dictates that CCS is an inevitable technology which will have to be implemented eventually (and hopefully sooner rather than later).