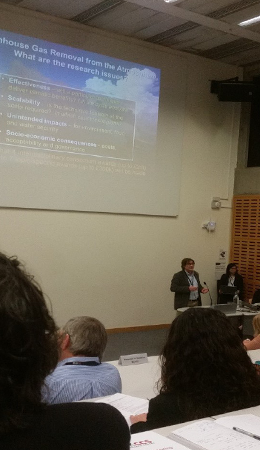 After the inspiring and scene setting talk of Baroness Liddell the time had come for Celia Yeung to give an update on EPSRC’s funding activities. Still only known by a few by that time, she had some delightful news to announce.

The vision of the EPSRC for its energy related activities, Celia continued to explain, is 3 fold: building capability, building leadership, and delivering positive impact for achieving the UK’s climate targets.

Within the EPSRC’s ‘National approach’, that is built on the pillars of supporting a healthy, productive, connected and resilient nation, the Energy ‘theme’ within EPSRC addresses the latter two.

For doing so in an effective manner the EPSRC has developed a 60/40 funding approach. This stands for the research institution’s philosophy of spending 40% of the budget on top down strategic research programs, compared to 60% that are spent flexibly on promising bottom up projects. This funding approach EPSRC believes to deliver maximum value to society. Particularly the latter part of the budget allocation Celia stressed has great potential to support CCS projects. She urged all researchers in the room to keep an eye out and to submit proposals for making use of this financing opportunity.

Finally, Celia prepared for making the announcement, with tension in the room immediately rising. She started off by complimenting the great job the CCS community has performed in carrying out essential research in great breadth and depth. This, she continued, together with the important role CCS might have in achieving the UK’s climate target has led the EPSRC to the decision to continue the support the UKCCSRC with £6million over the next five years. Having been in doubt about the continuation of the UKCCSRC over several months and years, the announcement led to big smiles amongst all researchers and practitioners across the room and to a long round of applause.

The director of the UKCCSRC, Jon Gibbins, came up to the stage to thank Celia warmly for this delightful news. He continued to talk about the continuation of the research center’s work and the path CCS has taken from being a ‘clean coal’ technology to being considered an essential ‘net zero emission’ technology.

After the cancellation of the competition Jon stressed the importance to demonstrate the value of CCS to the nation and the treasury. For the UKCCSRC this means pulling together the key knowledge gathered over the many research project that have been carried out, and to access and preserve the key knowledge about CCS that is in the heads of approx. 100 people in the UK, while it is still there.