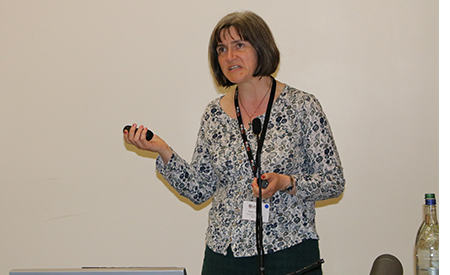 The UKCCSRC Spring 2017 Biannual, “CCS in the UK: Delivering for the Future”, was held at the Imperial College London on Tuesday 11 – Wednesday 12 April 2017. On the second day of the meeting the session on the topic of “Can BECCS make an Impact” started at 9:30am. Professor Mohamed Pourkashanian, Head of University Energy Research at the University of Sheffield chaired the session. Professor Patricia Thornley form University of Manchester was invited to speak first due to unavailability of Hannah Evans from ETI.  Prof. Thornley gave a very informative and expert vision of Environmental Impacts of Biomass with Carbon Capture and Storage (BECCS) systems. She started by introducing the “Supergen Bioenergy hub” and talked about the core management group where she described different work packages (WP) of the program. WP1 deals with different categories of biomass. WP2 deals with pre-treatment processes of biomass such as Torrefaction and pre-washing to control elemental composition of biomass. WP3 deals with conversion technologies i.e. gasification, a technology which needs right fuel stock to control tars generated during the process.  WP4 deal with biofuels, for aviation and shipping, for example.

Professor Thornley mentioned that current focus of the hub is on the project “Growth of energy crops on the contaminated land and their utilisation” with rationale of extending existing knowledge of biomass thermochemical conversion processes to more challenging feed stocks”. She stressed the need for BECCS by stating that “BECCS is a key component to be developed in the next 10 years” and that for –ve CO2 emissions at least 30% (wt%) biomass should be co-fired.

Professor Thornley mentioned that Share (Step-change for Higher Arts Research and Education) Network, an international networking project comprising of 39 partners across Europe, will announce a call for £100,000 funding for early career researchers this autumn.

Professor Thornley also talked about life cycle analysis (LCA) and techno-economic assessment of BECCS value chains in the UK and presented analysis of the impact of the rate of carbon capture on the GHG savings under oxyfuel conditions. She also highlighted the challenges for BECCS and that there are trade-offs when choosing a particular feed stock and conversion technology.

At the end of her talk there was a very interesting question from the audience. “In Californina, a 100 years old forest is being cut and shipped to UK to be used as biomass fuel, and it will take 100 years to replace it. Does LCA studies take these into account? Prof. Thornley answered that “it was not until recently, but now, yes, it’s taken into account”.

As mentioned above that Hannah Evans was not available and Professor Jon Gibbins, Professor of Power Plant Engineering and Carbon Capture and Centre Director at UK Carbon Capture and Storage Research Centre, at the University of Sheffield offered to speak on behalf of the ETI.

Prof. Gibbins started an introduction of the ETI and highlighted by comparing different scenarios that the ESME (Energy System Modelling Environment) model indicates an important role of bioenergy and CCS in the UK. Current status of the BECCS is that there are 21 large scale projects (with total capacity of 40MtCO2 pa) globally in operation or construction. In the UK, Low Carbon Innovation Coordination Group (LCIVG), Committee on Climate Change (CCC) and Lord Oxburgh’s report highlighted the importance of BECCS in an affordable low carbon transition. He also briefly talked about a report published by the ETI titled “Bioenergy Delivering greenhouse gas emission savings through UK bioenergy value chains”, a project titled “Ecosystem and Land use Modelling and Soil GHG Flux Trial (ELUM)” and direct land use emissions (dLUC) in bio-energy chains. Prof. Gibbins highlighted that there are no technical barriers to BECCS and that the UK is well placed to exploit the benefits of BECCS but challenges still remain is delivering a sizable BECCS sector in the UK. Finally he highlighted some of the key challenges of deploying sufficient BECCS capacity in the UK and capacity for storing sufficient amounts of CO2 and monitoring of storage sites safely. Prof. Gibbins concluded his talk by highlighting the role of ETI in developing BECCS and CCS.

At the end of the talk someone from the audience mentioned that a book on BECCS will be coming out by the end of this year.