Knowledge sharing between UK and Mexico 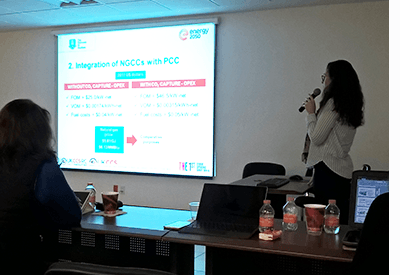 I was invited to take part in a knowledge-sharing workshop in Mexico by Prof Jon Gibbins, Director of the UKCCSRC, alongside Dr Bruce Adderley, UKCCSRC Executive Manager, Dr Laura Herraiz Palomino, University of Edinburgh and Bill Elliot, Betchel.

The initiative was part of the UK government’s commitment to sharing knowledge from UK CCS projects and to learning from other projects around the world. Reducing the cost of CCS deployment is an active research priority, not just in the UK but across the globe, so this was an interesting area of debate during the workshop.

The event, which took place in January 2018, came at a pertinent time for Mexico as their Government has recently completed a Pre-Feasibility study into developing a pilot plant at a natural gas combined cycle power station (Poza Rica) which is planned to be built in the next few years.

The diverse group of delegates had representatives from Mexico’s power, cement, steel and petrochemical industries, together with academics and Government attendees. Some of the attendees were well informed about CCS, but others were new to learning about CCS technology so we spent the first half of the week focusing on general aspects of CCS, what research has already been done, and the current status of development of the different technologies. The second half of the week was spent discussing the knowledge gleaned from the UK’s Peterhead and White Rose Projects, the Pre-Feasibility study of the Poza Rica pilot plant and the option of CCS for industrial processes.

I gave two talks over the week long course; “Post-combustion CCS,” and “Carbon Capture in a Natural Gas Combined Cycle”. Because I am a native Spanish speaker, I was able to facilitate the event by answering questions during breaks and networking sessions when translators were not available.

Knowledge sharing across countries means CCS technology can advance at a faster rate which is vital to meet global climate change targets. It is our hope that this workshop can be used as a model for rolling out similar CCS events for other countries.