Issues in Governance and Ethics of CCS – an ECR reports

Dr Nejat Rahmanian, University of Bradford, received funding to attend the Issues in Governance and Ethics of CCS meeting through the ECR meeting fund.

The UKCCS event on the Issues in Governance and Ethics of CCS took place at the University of Cambridge on 7th July 2015. This was after the IEAGHG 5th Social Research Network Meeting on 6th July. The UKCCS event started with a brief report on the previous day by David Reiner (University of Cambridge) and also feedback on the previous UKCCSRC meeting by Clair Gough (University of Manchester). Then, seven important talks were given while there were three useful open discussions. Tim Dixon (Technical Programme Manager IEAGHG R & D Programme) talked about International CCS projects, focusing on policy reflections. Peta Ashworth (Brisbane, Australia, SRN) talked about latest perspectives on CCS from Australia, finance, and the role of ENGO sectors.

The third talk by Elin Lerum Boasson from the Centre for International Climate and Environmental Research, Oslo, was on the Norwegian CCS story. It was a helpful presentation and opened a serious discussion, questions and clarifications with the speaker on issues of CCS in Norway. The talk clarified the role of social and political activities in society and their influence on governmental decisions for development of CCS projects. This also highlighted relationships between Statoil and the government to overcome the challenges of CCS development projects. I particularly enjoyed this talk and found it very appropriate to set the scene for all subsequent talks, which focused on particulars of certain issues between giant Statoil and Norwegian government and political parties. Elin concluded that the strongest sphere (factor) will influence the policy outcome the most. It is found that national political spheres and national organizational fields tend to be more important than the European environment in this case. However, weaker factors may also play a role, especially at critical junctures. 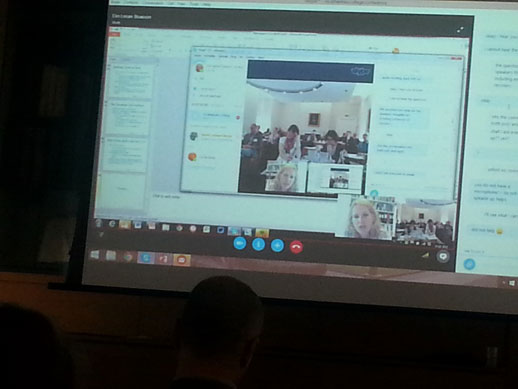 Elin’s talk was followed by Karl McAlinden from the School of Contemporary Chinese Studies, University of Nottingham, on CCS in China The talk was interesting and showed to me the level of hard work and communication in a different culture. Karl’s talk was about Social Learning with the People’s Republic and the Diffusion and Adoption of Carbon Capture and Storage (CCS) in international collaboration.

Emma ter Mors from the Social and Organizational Psychology Unit, Leiden University, Netherlands, compared the preferences of Dutch citizens and local government authorities in host community compensation in a CCS context. Jennifer Roberts from the University of Strathclyde, UK, talked about involving citizens in deliberative decision-making about energy development. The last talk was by Nils Markusson from Lancaster Environment Centre, Lancaster University, UK, comparing CCS and climate engineering while he stressed that climate engineering including solar radiation management, space mirrors, modified plants, tropospheric and stratospheric clouds are much more debatable than CCS.

It was interesting to hear about CCS projects in China, the Netherlands, Australia and Canada where a different culture causes serious challenges for social acceptability of CCS. In conclusion, I found that in several parts of the world, CCS is rapidly becoming part of broader public debate. This debate can involve a range of potentially influential actors, such as companies and their trade associations, environmental non-governmental organizations (ENGOs), the public, governments, and politicians.