Is BECCS ready to save the climate?

Home » Blog posts » Is BECCS ready to save the climate?

Written by Patrick Brandl, who is visiting the Chemical Engineering Department and Centre for Environmental Policy at Imperial College London as an Erasmus Postgraduate Student. Originally from the Technical University of Munich, he focuses on the cooling demand of post-combustion CO2 capture units in the UK

Dr Sabine Fuss from the Mercator Research Institute on Global Commons and Climate Change kicked off the presentations with the potential and limits of BECCS in climate change mitigation. The vast majority of the 430-480ppm climate scenarios rely on BECCS, which is a net-negative emission technology. The presentation pointed out that, without BECCS, no flexibility is given in current scenarios to reach the 1.5°C goal set in Paris. BECCS was compared with other net-negative emissions technologies, such as e.g. direct air capture, enhanced weathering and afforestation. BECCS performs favourably on CO2 capture potential and energy requirements (i.e., energy is produced), but less favourably on land use. However, all net-negative emission technologies have significant challenges to large-scale deployment. BECCS is widely considered as technology for the second half of the 21st century, but must be deployed in the 2020s in order to follow the RCP2.6 pathway. Dr Fuss highlighted the physical constraints and bottlenecks of BECCS which are, amongst others, the sustainability of large-scale feedstock related to other land biomass needs and water requirements.

Next, Dr Jasmin Kemper from the IEA Greenhouse Gas R&D Programme gave a status-update on worldwide projects. After summarizing the development in the last decade, an overview of different Bio-CCS technologies, such as co-firing, dedicated systems or bioethanol and Fischer-Tropsch biodiesel, was given. The differences between the accounting frameworks covering the European, American and Australian guidelines were presented and followed by examples like the Illinois Industrial CCS Project (> 1 MtCO2 captured by 2014) and waste-to-energy projects in the Netherlands and Norway. The Bio-CCS nexus context was covered, leading to an overview of research needs for Bio-CCS. While several projects are under way, there is a need for development in policy, regulations and financial instruments as well as in a sustainable supply chain. Dr Kemper finished her talk by emphasizing that Bio-CCS will be very case-specific and called for the fullest attention for this technology as other options are running short.

Prof Mohamed Pourkashanian of the University of Sheffield presented a technical overview of key challenges in biomass combustion systems with BECCS and pilot-scale research in the UK.  After a brief historical overview, simulation results of the boiler caught the attention of the audience, pointing out the advantages and disadvantages of classic fossil fuels and oxy-combustion. Going into more detail about composition and processing of biomass, it came clear that impurities as alkali-metals and trace-elements cause more problems with slagging/fouling than with conventional feeds. Experiments investigating ash formation and deposition were run at the UKCCSRC-Pilot Scale Advanced Capture Technology (PACT)’s pilot plant in Sheffield to provide information on a potential boiler operation. To date, no estimates or measurements of the composition of CO2 derived from Bio-CCS in power plant are available. Prof Pourkashanian highlighted simulation and experimental work from his group with videos of biomass combustion. Focus is also set on alkali and heavy metals with their impact on the process (slagging) and health (toxic), acknowledged in a new grant Opening New Fuels for UK Generation led by Dr Paul Fennell (Imperial College London).

The fourth presentation saw Dr Amit Bhave, CEO and co-founder of CMCL Innovations, giving an update on virtual engineering toolkits for biomass conversion with carbon capture. The Model Development Suite (MoDS™) can be “wrapped around” any process, system or software enabling e.g. multi-objective optimisation or Design of Experiments. The conversion of micro-algal biomass to fuels and bio-CCS were presented as examples and the advantages of global sensitivity analysis explained. Also, an overview of technology readiness levels (TRL) for a variety of capture systems studied as part of the ETI-funded project TESBIC (Techno-Economic Study of Biomass to Power with CCS) was presented, with those for Bio-CCS varying between TRL 4 and TRL 7.

Dr Mark Workman from Imperial College London was the final presenter and gave a different approach to the proposed roll-out of climate change mitigation technologies: Instead of trying to deploy BECCS in the scale needed and failing to do so (due to various reasons mentioned in earlier presentations), he called for a change in the mindset to a learn-by-doing approach. The deployment of greenhouse gas removal technologies, such as BECCS, direct air capture or ocean liming afforestation should be a focus of short-term research and policy. Dr Workman gave an example of learn-by-doing, in the development of a significant supply chain and technology that was necessary when DRAX announced that it was to convert all its boilers to biomass. 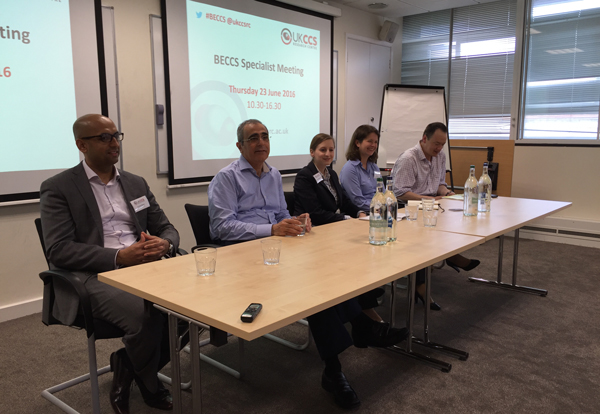 Following the presentations, a discussion session was held and various topics were covered. Some speakers mentioned the uncertainty of current policy in the UK, with reference to the cancelation of the £1bn competition for CCS. Another heavily discussed topic was problems associated with developing a sustainable supply chain for biomass in terms of land and resource usage, in to achieve the scales set out in many 430-480ppm climate scenarios. The deployment method, as questioned in the last presentation, is crucial because the social acceptance for climate change mitigation technologies is not guaranteed. While not all experts could agree on a best approach, the call for action is urgent.

In uncertain times, with the UK preparing to leave the European Union, it is particularly important for experts in the field of climate change mitigation technologies to seek the direct dialog with society in the most optimistic, convincing and honest way possible. BECCS is a technology for the future, which needs to be addressed now.

*Presentations from the meeting can be viewed on the event page.