Ionic liquids are organic salts that are liquids at temperatures below 100 ºC, and most of them below room temperature. They are composed by large organic cations, viz. imidazolium, pyridinium, pyrrolidinium, ammonium, etc., and mainly organic anions. Ionic liquids present extraordinary properties such as negligible vapour pressure, high thermal and chemical stability and high CO2 loading, making them promising solvents for carbon capture. Conversely, the cost of first generations of ionic liquids were prohibited. The staggering process-related benefits of replacing traditional solvents with ionic liquids were wiped out by the price of the ionic liquids. However, Dr Jason Hallett has shown that novel protic ionic liquids have bulk costs similar to commodity organic solvents such as acetone or toluene. This opens the door to the realisation of more industrial processes using ionic liquids.

The combination of known and to be discovered cations and anions is so extremely large that we need comprehensive methodology to discern what ionic liquids are suitable for a certain process.

We aim to develop a systematic tool that will help us to understand the relation between the molecular structure of ionic liquids and their process performance from both a monetised and non-monetised perspective. We are looking at the problem from a novel perspective by trying to fill the gap between the experimental properties of the solvents determined in a lab, and the industrial concerns of the economics of the carbon capture process using ionic liquids. 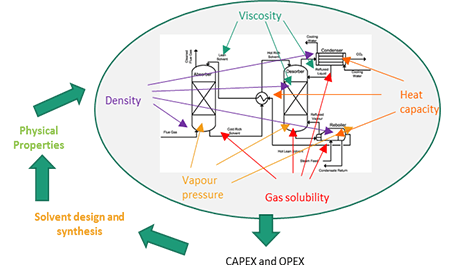 Our ultimate goal is to establish which chemical characteristics of the ionic liquids are relevant to minimise the cost of carbon capture. The results will guide us on the structurally tailored design of the ‘perfect solvent’ for carbon capture.

The questions we are trying to answer are: what is the maximum value that we can undertake? What are the main physical properties of the solvent that affect the process? Can we find an ionic liquid that presents those optimum values? If so, what is the structure? What are their advantages compared to other solvents?