This is the final blog for the UKCCSRC Call 2 project, ‘Investigating the radiative heat flux in small and large scale oxy-coal furnaces for CFD model development and system scale up’. It is a collaboration research carried out by researchers from University of Sheffield, University of Edinburgh and Huazhong University of Science and Technology (HUST) from China.

Oxy-fuel combustion has been recognised as one of the very most competitive technologies for CO2 capture in the power generation sector. It is widely agreed that an accurate radiative heat transfer model is a major priority issue in CFD modelling of oxy-fuel combustion. Therefore, the project has focused on investigating the radiative heat flux in small and large scale oxy-coal furnaces (see Figure 1) and validating radiation models for CFD simulation. The main aims of this project are thus to collect a comprehensive and much needed set of data for radiation model validation by measuring experimentally the combustion and heat transfer properties, including direct radiative heat flux, in the two combustion furnaces. The data collected have been used to simulate the combustion and heat transfer processes in the two furnaces and to validate the refined radiation property models for the gas and particle radiation properties. The developed and validated CFD models may then be employed with more confidence to predict, analyse and optimise the operation of future full scale CCS plant for system scale up. 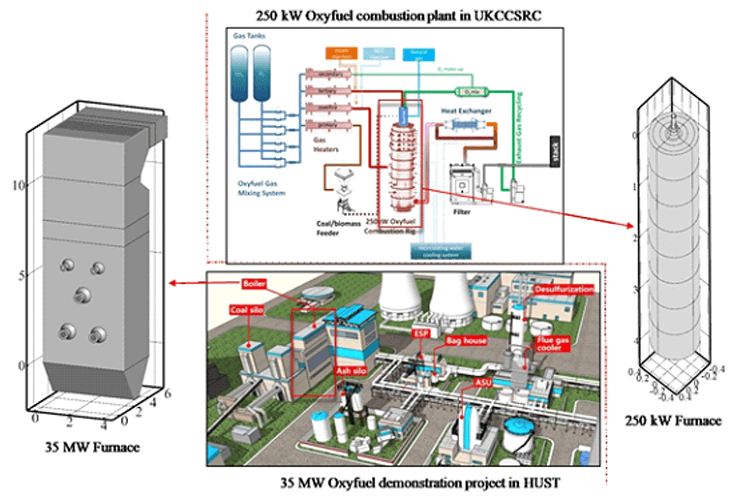 We have carried out the experimental investigation on the 250kWth furnace at PACT under three combustion conditions (including one air case and two oxy cases with 27% (Oxy27) and 30% (Oxy30) overall oxygen concentration). In addition, three combustion tests (including one air case, one dry recycle case and one wet recycle case with 28% overall oxygen concentration) have been carried out in the 35MWth furnace by our partners from Huazhong University of Science and Technology (HUST) in China. Experimental measurements (in- furnace gas composition, flue gas composition, and heat transfer properties) have been successfully collected in the two combustion furnaces and used for the model validation. In the 250kWth furnace, similar heat transfer properties under air-fired operation can be obtained under oxy-firing by adjusting the O2 concentrations. Increasing the overall oxygen concentration can increase the heat transfer (surface incident radiation and the total heat transfer)  to  the  wall.  Higher  CO2   concentrations  are  successfully  achieved  in  oxy-fuel combustion cases. Further, the NO emission in the flue gas under oxy-fuel combustion conditions was lower than that under the air-fired combustion condition. In the 35MWth furnace, similar to the small scale furnace (250kWth furnace), similar temperature distributions and heat transfer properties under air-fired operation can be obtained under oxy-firing conditions. The CO2 enrichment of over 80% at the exit is achieved and the total emission of NO is lower than that under air combustion condition.

This project has accomplished its primary objectives of investigating the combustion and heat transfer behaviours in small and large scale oxy-coal furnaces both experimentally and computationally for validating new radiation models in order to enhance the capability for system scale up. The comprehensive measurement data collected under well controlled test environments in the 250kWth furnace at PACT and the onsite measurement from the 35 MW pilot scale oxy-coal fired power plant boiler from China, are very useful for future oxyfuel combustion furnace design, scaling up and computer model development and validation. New collaboration has been also established between Universities of Sheffield and Edinburgh from the UK and Huazhong University of Science and Technology from China in the field of CCS research. The knowledge and experimental data shared among the project partners, have enhanced the experimental and modelling capabilities for both institutions.