The University of Cambridge (Energy Policy Research Group) and University of Saskatchewan (Johnson Shoyama Graduate School of Public Policy) have begun a collaboration to research public attitudes towards CCS and low-carbon technologies in the United Kingdom and Canada with funding from the UKCCSRC International Collaboration Research Fund.

In both locations, we were interested in exploring questions about public attitudes towards energy including the extent to which members of the public are aware of ongoing debates over energy more generally and over CCS specifically, the sources of information that have informed their opinions regarding different technologies, and the elements of an energy portfolio that members of the public would support.  In the United Kingdom, we were specifically interested in using the focus groups to better understand the impact of the recent cancellation of the £1 billion CCS competition and in Saskatchewan we will focus on perceptions regarding the Boundary Dam CCS plant. By contrast, the citizens’ juries offer the opportunity for a wider and more detailed discussion on energy policy.

For the UK fieldwork, Ipsos MORI, an international market research firm, assisted with recruiting, moderating, and transcribing the sessions. We conducted four focus groups in Scotland in January: two in Peterhead (the proposed location for one of the two CCS demonstration projects), one in Aberdeen, and one in Edinburgh. Each focus group lasted two hours. Kirsty Anderson of the Global CCS Institute and Stuart Gilfillan of the University of Edinburgh served as our experts and delivered a brief presentation during the focus groups followed by a question and answer session to provide focus group participants with factual information regarding CCS.

Provisional research findings indicate that members of the public from all locations perceived oil and gas from the North Sea to be important to the local economy, but had concerns about its long-term viability and had an overall positive view towards the transition to renewables.

With regard to CCS, public awareness was very low, including in Peterhead, the town where the CCS demonstration project was planned to occur. Less than a quarter of focus group participants had any awareness, let alone knowledge, of the Shell Peterhead proposal. Following the presentation, members of the public expressed concerns regarding the safety and costs of CCS, but generally perceived it as a technology that could help the environment and provide jobs, taking advantage of existing infrastructure and geology in the region. 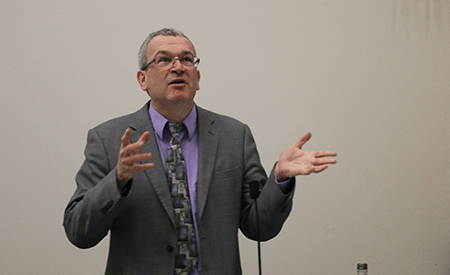 A two-day citizens’ jury was conducted in Aberdeen, and another in Edinburgh in February. The purpose of these juries was to provide a deliberative process where members of the public could engage in a sustained dialogue on energy policy in Scotland, including information from a variety of experts in energy. Day one focused primarily on energy challenges facing Scotland, while the second day involved further discussion related to key factors that should be considered when choosing an energy policy. Each jury heard from three leading experts (Keith Bell (Strathclyde),Stuart Haszeldine (Edinburgh) and Jelte Harnmeijer (James Hutton Institute)) in Edinburgh and three other experts in Aberdeen (Euan Bain (Aberdeen), Alex Kemp (Aberdeen) and Leslie Mabon (RGU)).

Each jury provided a set of recommendations. Recommendations from the participants in the Aberdeen jury included: 1) nationalization of Scotland’s energy industry; 2) the establishment of an impartial authority to decide energy policy in Scotland (independent of political parties), which would ensure that there are numerous energy sources, and research energy sources that could be transitioned to; 3) profits made from energy in Scotland should be returned to local communities, and 4) the public should be consulted more frequently regarding energy policy. According to the Edinburgh jury participants: 1) pro-environment energy policy legislation should not be able to be overturned if a less “environmentally focused” political party comes into power; 2) there should be investment in multiple energy types; 3) the safety of CCS should be established by 2020 with a test project by 2025; and 4) there should be targeted energy-related initiatives for different demographic groups.

The next stage is to conduct parallel efforts in Canada. David Reiner, the Cambridge PI, was in Saskatchewan in May and discussed the design of the focus groups and citizens’ juries. Jeremy Rayner, the Saskatchewan PI was in Cambridge in July for additional discussions and the research on the Canadian side will be conducted in the early autumn.