This blog wass written by Kyra Sedransk Campbell, a UKCCSRC ECR member from Imperial College London, who received funding from the UKCCSRC ECR Meeting Fund to attend the International Forum on Recent Developments of CCS Implementation Leading the Way to a Low-Carbon Future which took place in Athens, March 2015.

The International Forum on Recent Developments of CCS Implementation was held over two days in Athens supporting both CO2Quest and IoLiCAP. The schedule was packed full of four plenary lectures, 32 presentations, and 13 posters with topics ranging across the field of carbon capture. In addition to the structured meeting, there was the opportunity to have interesting and thought-provoking discussions throughout. 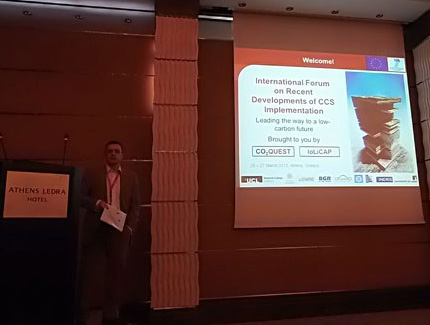 This first day started off with topics on the transport and safety concerns in which a wide variety of issues were considered. This included a presentation by Stephanie Foltran where she demonstrated novel work on the reduction of water solubility in carbon dioxide with the inclusion of nitrogen. This introduces a particularly important finding in reducing safety concerns associated with CO2 transport. In a second session on  transport the following day, the breadth of concerns were highlighted including corrosion on mild steel in the use of ionic liquids. This presentation by Igor Molchan showed that ionic liquids can prove problematic in corrosion of steel but the addition of 500 ppm of sodium molybdate proved a sufficient inhibitor for short timescales tested. Such studies are important given that corrosion remains one of the most significant concerns in carbon capture implementation due to the financial and safety implications.

Both days included interesting sessions covering both the advancements and limitations of capture technologies. On Thursday, this session featured firstly a thoughtful presentation given by Peter Schultz entitled ‘CO2 Capture by Novel Supported Ionic Liquid Phase Materials Consisting of Silica Encapsulated Chitosan Ionogels.’ Interestingly, this work highlighted an alternative preparation method using inverse supported ionic liquid phase systems. Such process developments are necessary in promoting the feasibility of alternative carbon capture techniques. This was followed by another interesting approach presented by Antonio Salituro on the use of polyethyleneimine (PEI) impregnation of activated carbons. This method demonstrates that modification of activated carbon with PEI has significant capacity for CO2 capture, potentially in a packed bed reactor system. Such diversity in current capture techniques highlights that the breadth of possibilities still under consideration for future implementation. 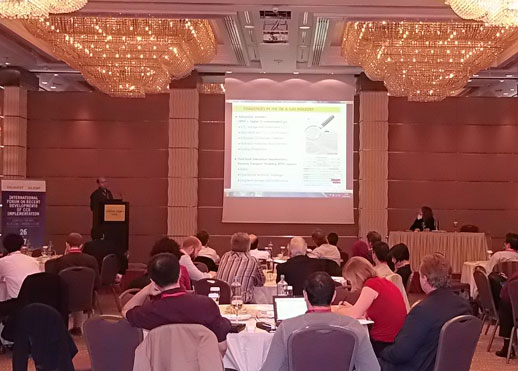 The developments in capture continued on Friday. This included three presentations focused on ionic liquids and their improvement and operation. In the presentation made by Boyan Iliev, he demonstrated that the ease in synthesis of a wide variety of ionic liquids; importantly, many can also be achieved on a large scale and often with flow techniques. As with the previous presentations discussed, developments for ‘scaling-up’ in the carbon capture process are a critical hurdle if the technique is to be deployed industrially.

In addition to the presentations, the poster presentations were very successful with constant dynamic discussions amongst conference participants during the session breaks. The conference featured a wonderful dinner at the conference hotel on Thursday night. The success of the dinner was evident with many of the delegates lingered well beyond dinner engrossed in conversation. The organizing committee should be commended for developing a very full and thought-provoking two days on the future implementation of carbon capture technologies.