It was a great pleasure to attend my first meeting of UK Carbon Capture and Storage Research Centre (UKCCSRC).The best thing about this event was to interact with the closely-knitted community of Carbon Capture and Storage (CCS) research in the UK. Many researchers like me would resort to three areas of the carbon supply chain while referring to CCS namely capture, transportation, and geological storage. However, I realized that the CCS research is far more outreaching than these conventional areas and it includes public perception, governmental policies and social aspects.  There were a fair sized group of presenters who covered most of the CCS research areas. In this blog, I would only cover Industrial CCS session held on 14 April 2016. 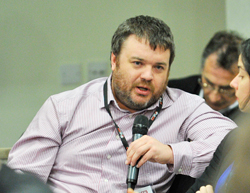 Syed Z. Abbas from the University of Leeds presented his work on modelling of steam methane reforming using their sorption-enhanced technique to produce hydrogen. This work promises a high-temperature and high-pressure technology to supply 96% pure hydrogen that can be used as transportation fuel with no emissions from the engine except water vapours.

Sergey Martinov from University College London presented his modelling results on the integration of CCS pipelines that would be essential to connect carbon capture sites to injection site with possibility of long distances between them. Sergey’s work is clearly essential to determine the essential information and limitations of a transportation system with piping network due to corrosive nature of carbon dioxide especially in the presence of impurities

Kyra S. Campbell from the Imperial College presented a discovery concerning amine-based solvents used in carbon capture with low corrosion rates in cheap materials of construction for CCS equipment. In general, amine solvents are very corrosive and their concentration is kept between 25-35 % in water to minimize corrosion problem in carbon capture process equipment. Her research found that certain amine solvents develop a passive layer on the surfaces of cheap materials of construction such as cost iron; this layer of the corrosion products limits further corrosion. She proposes to use blends of amine for carbon capture that not only capture carbon dioxide efficiently from flue gases but also provide a protective layer on the inner surfaces of process equipment to make it less susceptible to corrosion. She conducted her experiments in conditions that are slightly different from those encountered in process equipment but her results are very promising and merit further research.

While other three talks were generally quite good, it’s Prof Haroun Mahgerefteh from the University College London who took all the attention of the audience in terms of contents, coverage and exciting results from his collaborative EU project on industrial CCS with €5M budget and 40 months research efforts. Haroun and his collaborators from 10 organizations from Europe, China, Israel and Canada are finding answer to technical questions, what is permitted in a carbon dioxide pipeline to ensure its cost effeteness and safety? In this project, very large to medium scale experimental research facilities were constructed in China to study large-scale CO2 release from pipeline failure experiments. Haroun fascinated his audience with videos from his large scale experiments involving carbon dioxide release and pipeline ruptures under extreme conditions. His work clearly showed that a high-pressure carbon dioxide pipeline failure is very different from those involving natural gas. Haroun also presented the experiments that his colleagues conducted in France to test the injection of industrial grade CO2 in a shallow freshwater aquifer. Fortunately, there was no report of any leakage from the injection well to nearby fresh-water aquifer.

This session was chaired by Dr Paul Fennell from Imperial College London. There were four speakers to present their newest research progress about Industry CCS. 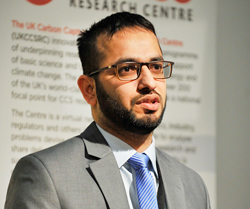 The first report in this session was presented by Syed Zaheer Abbas from University of Leeds. The presentation title was “Modelling of packed bed sorption enhanced steam reforming (SE-SMR)”. First of all, he introduced the concept of SE-SMR process and described the model of the process. They made some assumption during modelling, such as the operation was considered to be adiabatic in nature and the porosity of the bed was constant. And then he presented the reaction scheme, the experimental setup and operating conditions used in modelling. In addition, they validated the model and the temperature profile. Finally, the effect of inlet temperature, pressure and S/C ratio was considered and they get some conclusion from their research, such as the optimum temperature under 30 bar is 923K.

The second speaker was Dr Kyra Sedransk Campbell from Imperial College London. The topic of her presentation was “Developing amine blends for carbon steel infrastructure in post-combustion carbon capture”. At the beginning, she made an overview introduction of their research project. Following the introduction, she illustrated the capture cost reduction for industrial CCS. And then, she emphasized the corrosivity of aqueous amine solutions and the corrosion reduction in different conditions. Finally, they got the conclusion that there is viability in the use of promoter-blends with carbon steel under well controlled circumstances and operation of the system must accommodate blend operation parameters, a high operating cost will negate the benefit of a lowered capital cost. 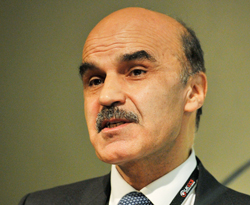 The third speaker was Professor Haroun Mahgerefteh from University College London. He reported the research about techno-economic assessment of CO2 quality effect on its storage and transport. First of all, he introduced the background of this project and the challenge of CO2 storage and transport. In short, what is good for the pipeline is not necessarily good for storage. His presentation provided an overview of the CO2QUEST project aimed at answering the question of “what is the optimum range and concentration of impurities that can be permitted in the CO2 stream to enable its safe and cost-effective transportation and storage”. In addition, he showed the video of the experimental phenomenon during the large-scale and medium-scale CO2 release which gave me a deep impression.

The final report “A multi-source flow model for industrial CCS pipeline transportation networks” was reported by Dr Sergey Martynov from University College London. First of all, he introduced the CO2 pipeline transportation in UK and the CO2 pipeline networks. Their objectives were to develop a rigorous CO2 network flow model accounting for variation in conditions at sources and apply the model to evaluate the impact of the source variations on a network operation. They developed a pipeline network model and reported the case studies about the pipe network.

Carbon capture and storage (CCS) is considered to be a viable strategy to cut CO2 emission from large point sources such as power plants for the foreseeable future. A variety of CO2 capture technologies are under development and demonstration at different scales, including the aqueous absorption technique, the physical adsorption and the membrane method. Current situation of different capture technologies in industrial application is very interesting topic for any researchers in this area. In order to share more about CCS in industrial application with researchers, a session in UKCCSRC meeting entitled “Industry CCS” is chaired by Dr Paul Fennell from Imperial College. Four researchers are invited in this session from different universities. Their presentations focus on modelling work about sorption technology used in methane reforming process and pipeline transportation, techno-economic assessment and solution of corrosion problems during amine scrubber. 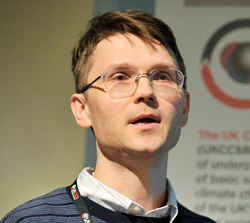 Syed Zaheer Abbas from University of Leeds and Dr Sergey Martynov from UCL present their modelling work. Syed  focused on the sorption technology used in methane reforming process; he just proposed a dynamic one-dimensional heterogeneous packed bed reactor model in sorption enhanced steam methane reforming process and gives the details simulation process to get the optimum condition in order to minimize the operation cost; the results are in excellent agreement with experiments.  Dr Martynov presents their modelling work for CO2 pipeline transportation. He developed a multi-source flow model to predict the entire flow conditions like pressure and temperature and also the effect of impurities on CO2 transportation. All of their works are helpful to improve the performance of CCS in industry.

Prof Haroun Mahgarefteh is now involving in the CO2QUEST FP7 collaborative project led by UCL. CO2QUEST is a project to do techno-economic assessment of CO2 quality effect on transportation and storage.  Prof. Haroun Mahgarefteh gives a presentation about the progress of CO2QUEST. He shows their main findings and an impressive video about the large-scale CO2 release experiments carried out in China. This project is very meaningful that will make big contribution to the development of safe design and economic operation of CCS. 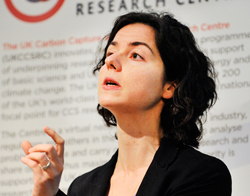 Amine scrubbing is a widely used technology for carbon capture due to the well-understood kinetics and behaviors. However, corrosion is one of the biggest problems during operation. Dr Kyra Sedransk Campbell from Imperial College London gives a presentation about her research work “developing amine blends for carbon steel stripper and reboiler infrastructure”. In her research, she found that tertiary amines or sterically-hindered amines could enhance the formation of siderite layer on the surface which is helpful to prevent corrosion. That work has great potential for the improvement of amine scrubbing technology.

Many thanks for UKCCSRC biannual meeting!